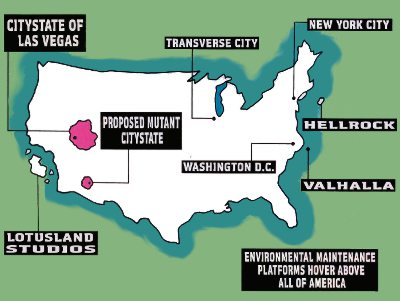 Nueva York, or New New York, was literally built atop the ashes of the old city of Manhattan. An entire superstructure was constructed over Old New York that represented modern, corporate New York. "Downtown" New York now referred to Manhattan's original architecture, where all but the tallest buildings were completely submerged beneath Alchemax's superstructure. Miguel O'Hara lived on the 211th floor of Bedford Towers, which rested on Alchemax's "street level" more than 50 stories above actual Manhattan bedrock. Downtown was mostly a de-credit zone, populated by only the poorest of New York's residents. The class divide was so literal than many Uptowners and Downtowners could go their entire lives without crossing the vertical border at "street level." 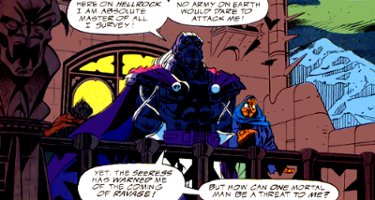 Hellrock was an artificial island of manmade pollution somewhere off the coast of New York City. A combination penal colony and dumping site, the ecologically unfriendly by-products of Corporate production were sent to Hellrock, which generated a reverse ion field to hold the pollution together on the island. Polluters and other undesirables were also given a one-way ticket to Hellrock, where the radiation and atmospheric toxins caused them to degenerate into the mostly insane and deformed Mutroids. Hellrock was ruled by Dethstryk, an armored despot in exile who served as the public face of Evil Polluters. Dethstryk was strongly implied to be Graeme Stryker, the last democratically elected President of the United States, overthrown during the Pollution Wars. His advisor, the Seeress, was apparently his First Lady. Dethstryk was secretly in alliance with Anderthorpe Henton and Alchemax for their mutual benefit, but also schemed to seize additional power for himself. 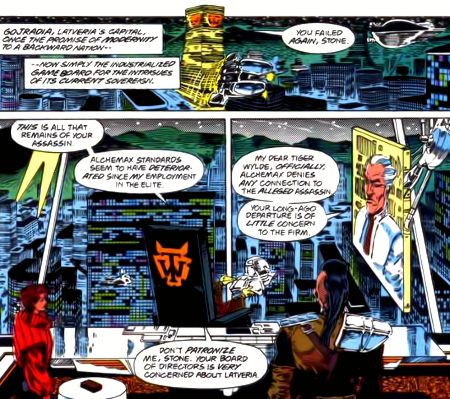 Latveria was at a loss after the disappearance of their monarch, Victor von Doom, early in the 21st century. By the end of the century, the small Eastern European country was on the verge of being swallowed up by the MegaCorps. Instead, it fell to a foreign invader. The American mercenary Tiger Wylde assumed control of Latveria after escaping from his former Alchemax superiors, and forced the country into his image. Rampant technological development and illegal black market trading marked Doctor Doom's former kingdom. 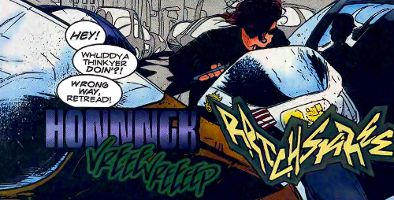 "Transverse City sprawls between what used to be Detroit and what Chicago became. Ten stories, twenty lanes; all together, more than 50,000 miles of bad road. It started out in '34 as the beginning centerpiece of a transcontinental superhighway, and ended up a nightmare of Darwinian social ecology. The only sane way to see Transverse City is through the gunsights of a T-91B with a warm nuclear payload snuggled under your wing." -- excerpt from Ghost Rider 2099 #1 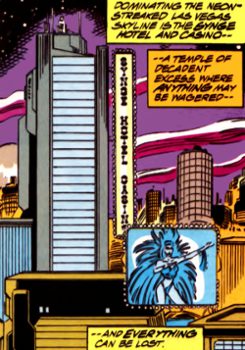 Las Vegas was still open, but now officially run by the mob. The Greater Nevada Syndicate ruled Vegas and the surrounding territory. Trials and death sentences were run as live game shows, and the Syndicate contributed regularly to the Red Market flesh trade of slaves, unwilling organ transplants, and Bio-Shop test subjects.

California finally broke off from the rest of the country, thanks to a series of bombs set by extreme environmentalists in 2076. The New Pacific Channel was guarded by armed drones to gun down immigrants who tried to swim across the waters from the rest of the country. Oakland was territory to the Sons of the Panther, a local militia who used Wakandan tribal values to impose order. Hollywood was still Hollywood, only more so. Studio execs backstabbed each other to secure the rights to the latest development deals, then killed their sources to keep the rights exclusive. Meanwhile, the underbelly society of Locusts traded and killed for TwenCen movie artifacts, set dressings and memorabilia.

X-Men: To Serve and Protect #1