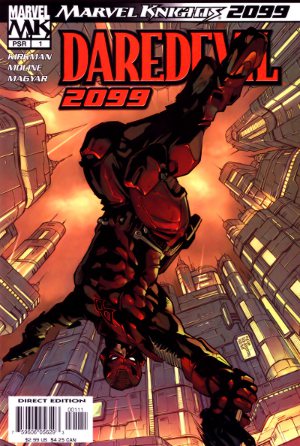 Marvel Knights 2099 was the first attempt at reviving the 2099 brand. It consisted of five one-shots starring Daredevil 2099, Black Panther 2099, Inhumans 2099, Punisher 2099 and Mutant 2099. However, these titles were 2099 in name only, and had virtually no connection to the previous 2099 themes or characters. The Daredevil and Punisher of MK2099 were completely different characters from the earlier 2099 stories. The Marvel Knights 2099 universe only briefly resurfaced after the one-shots, in Marvel Team-Up Volume 3. Timestorm 2009-2099 was the second mini-event to revive the 2099 brand. Although still an incompatible timeline with the original 2099, Timestorm was much similar to it, reusing many of the classic characters and archetypes such as Miguel O'Hara, Shakti Haddad, Jake Gallows, and Alchemax. Since Timestorm's Alchemax was also experimenting with time travel and time manipulation, there was even a built in explanation for the discrepancies. When Eva Bell accidentally became lost in the timestream thanks to her powers, one of her stops was an alternate version of the 2099 universe. A full picture of this future wasn't disclosed, but it apparently has its own Miguel O'Hara. The X-Men (Xi'an, Skullfire, Meanstreak, Serpentina, Metalhead, and Sham) were markedly different but recognizable. In the first Bell future, Illyana Rasputin had become Sorceress Supreme and mentored Eva in learning to control her power. After seven years in the future, Eva married Danny Warburton and had a child. During an attack by a massive demonic figure, however, Eva jumped back in time and inadvertently lost or erased her new home. By the time she found her way back, the timeline was heavily changed. In the second Bell future, Doctor Anthony Stark assumed Illyana's position, and Eva's husband and child no longer seemed to exist.

A divergent 2099 timeline was created during the Exiles' World Tour, when the dimension-hopping heroes chased the villain Proteus to the original 2099 timeline. Their interaction with the Spider-Man and Hulk of that timeline (among others), caused a divergence in the original history. Hulk 2099 became Proteus's latest host body, leaving the timeline altogether. Miguel's identity as Spider-Man was revealed to the MegaCorps, leading him to abandon his timeline to go dimension-hopping with the Exiles.

In Superior Spider-Man #17-19, another version of Miguel O'Hara and the 2099 future was introduced. The "Superior 2099" timeline greatly resembles the original 2099 stories, but appears to have diverged from them at an unknown point. It has introduced several plot points incompatible with the original 2099 timeline, such as Tyler Stone being in charge of Alchemax after the debut of Venom 2099. In the original timeline, Stone was bedridden when Venom first appeared, then in a wheelchair trying to retake Alchemax from Miguel O'Hara until he was killed when New York flooded. Jake Gallows was killed in the downfall of Doom's Presidency, also around the time of Venom's debut, yet he too appeared in the Superior 2099 future.