Shortly after the X-Men sacrificed their lives to save the world during The Fall of the Mutants, the goddess Roma restored them to life and inserted them into the heart of the Australian Outback. There, the X-Men were pitted against a group of sadistic, cybernetic super-criminals known as the Reavers, who occupied an abandoned mining town in the otherwise empty desert. The X-Men swiftly defeated these international pirates and chased the remnants out of town. Resolving never to let a good thing go to waste, the X-Men—or the X-Squatters, as Deadpool would later call them— commandeered the Reavers’ hideout and made it their home.

Not only did this new home suit their needs but, thanks to Roma’s magic, the technology they pilfered from the Reavers and the abilities of a grateful Aboriginal mutant named Gateway, the reincarnated X-Men were able to detect problems and crises around the planet and transport themselves there instantaneously. Coupled with their purported deaths, the X-Men became a clandestine, hit-and-run squad situated to administer Xavier’s dream across the globe without fear of retaliation.

However, they got more than they bargained for with these new headquarters: they not only inherited a demonic computer system with a mind of its own but they invoked the ire of the Reavers, who were not willing to let their home go so easily. In short, although sometimes peaceful, this isolated ghost town in the heart of the Australian Outback became a focal point of trouble. It was there that the team, which had endured countless trials together, would finally unravel. 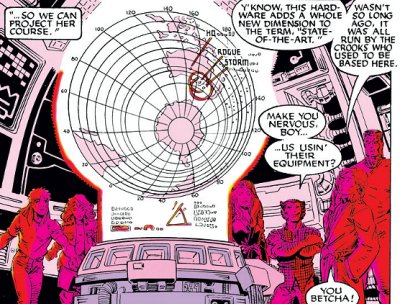 The Australian Outback spans several thousand square miles, covering most of the continent of Australia. Because of its size, pinpointing the exact location of one relatively anonymous town within it is difficult, especially when different characters give contradictory information as to its whereabouts. Some details suggest the town is in Western Australia. [X-Men Legacy #220-224] However, the town’s high-tech computer systems are probably a more reliable source of information and they place the town somewhere in North Central Australia. [Uncanny X-Men (1st series) #249, Uncanny X-Force #5.1] The fact that the town is said to be approximately 200 miles southeast of Lake Disappointment – plus or minus a day’s hike – supports this interpretation. [X-Men (2nd series) #44]

Additionally, there is some ambiguity surrounding the town’s name. Rogue, Gambit and Professor X refer to the region in which the town is located as Maynards Plains [X-Men Legacy #220-224] X-Force and the Reavers, however, refer to the town as Cooterman’s Creek. [Uncanny X-Force #5.1] The likeliest possibility is that both names are accurate and that the region wherein the town lies is called Maynards Plains, whereas the town itself is called Cooterman’s Creek. The inclusion of “creek” in the name also fits with Rogue’s claim that the town is about ten miles away from Woolagarra Creek. [X-Men Legacy #220]