Cooterman’s Creek is outfitted with advanced technology, some of it of unknown origin. It is unclear which of its technology was installed by the Reavers and which of it has other, even more mysterious origins. Although some team members, such as Havok and Maddie, wanted to use the advanced technology to their advantage, others, like Wolverine and Storm, did not trust its creators and blamed it for corrupting Madelyne. [Uncanny X-Men (1st series) #245]

The comprehensive surveillance system can map out three-dimensional displays of the entire town, both above and below ground. These feeds also provide live displays of every occupant’s position in the town. The footage feeds into the central computer, which displays the images on its myriad screens. Additionally, the cybernetic dingoes that patrol the compound also stream live surveillance footage to the monitoring systems. [Uncanny X-Men Annual #13] 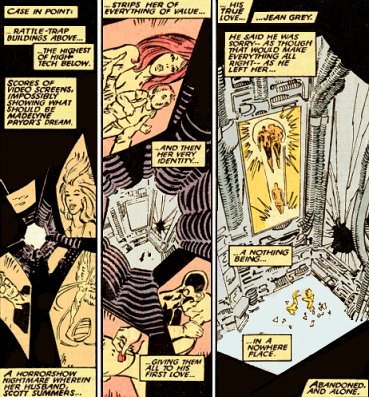 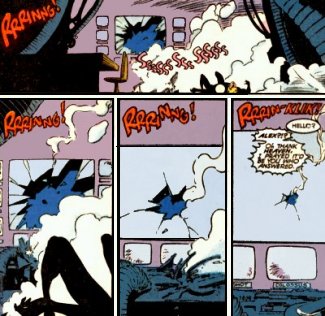 In addition to being connected to Limbo and possibly self-aware, the computer is self-repairing as well. It may even grow like an organic organism. The monitor twice repaired itself after a user damaged it: once at the hands of Madelyne and once by Havok. [Uncanny X-Men (1st series) #234, 249]

Because the computer system can physically repair itself, it should come as no surprise that it can grow as well. After the Reavers retook the town, they observed that the computer system seemed to be growing on its own. [Uncanny X-Men (1st series) #252] However, this came as a surprise to the system’s former operator, Bonebreaker. He did not understand its new programming language or how it was capable of growing and compared it to a living organism.

What accounts for the computer’s seemingly mystical elements? Judging by how the Reavers reacted to it upon their return to their base, it is likely the mystical elements of the technology developed during their absence, while the X-Men occupied the base. It is possible the blossoming magical power in Madelyne Pryor, on her way to becoming the Goblyn Queen, kick-started the computer’s magical development. It is also possible that the goddess Roma, who made the X-Men invisible to all magical and electronic sensors except for the ones in the compound, inadvertently spurred its magical growth. Regardless, this technology appears to be foreign to the facility and remains the greatest mystery surrounding the town.