Cooterman’s Creek is an abandoned mining town in North Central Australia, in the middle of the inhospitable Australian Outback. The town was initially developed to mine ore prevalent in the region. It was able to flourish in the otherwise arid desert because it was situated above a large, underground reservoir of fresh water. During its heyday, the town was industrious enough to support a saloon, a barber shop, a hotel called the Desert Rose and a newspaper called the Woolagarra Herald. It also contained a windmill and a water tower.

For reasons unknown – but possibly because its inhabitants depleted the nearby resources – the town was abandoned in 1912. However, the extremely low levels of humidity and rainfall preserved it rather well, making it suitable to live in even in the present day. [X-Men Legacy #220] 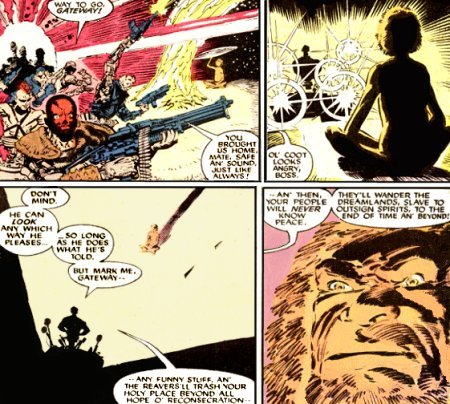 At some point, a villainous gang of cybernetic super-criminals called the Reavers discovered the deserted mining town and claimed it as their headquarters, out of which they engaged in international thievery. Their depravity was matched only by their technological genius: not only were most of their members outfitted with cybernetic enhancements, but they designed a highly advanced computer network within the town that served as their surveillance and allowed them to hack any other computer network on the planet. The Reavers also captured and enslaved an Aboriginal mutant, whom they dubbed Gateway because of his ability to transport people anywhere in the world with a mere spin of his bullroarer. They threatened to destroy a place sacred to his tribe if he refused to comply. [Uncanny X-Men (1st series) #229-230]

Their access to instantaneous teleportation, coupled with their advanced technology and complete depravity, made the Reavers a force to be reckoned with. For an unknown length of time, they plundered the globe and stole vast amounts of wealth, which they stored in large vaults beneath the town. Their thievery also had a body count, as they often executed their victims and took hostages. [Uncanny X-Men (1st series) #229-230]

After the X-Men died on national television in Dallas, Texas, Roma resurrected them and had them ambush the Reavers in the headquarters in Australia. The team – at that time consisting of Storm, Wolverine, Havok, Colossus, Rogue, Dazzler, Longshot, Psylocke and their ally, Madelyne Pryor – swiftly defeated the cybernetic pirates. However, Gateway helped three of the Reavers escape after they promised to release him from captivity. [Uncanny X-Men (1st series) #229]

Rather than executing the captured Reavers, the X-Men sent them through the Siege Perilous, a magical device Roma gave them that judged those who entered it and gave them a new chance at life. The Siege Perilous provided the added bonus of wiping the memories of the Reavers who entered it, thus preventing them from telling the world that the X-Men were still alive. In addition to bestowing this gift on the X-Men, Roma also enchanted them with invisibility to all electronic and magical sensors, except the ones in Cooterman’s Creek. The X-Men had everything they needed to succeed: anonymity, invisibility, instantaneous teleportation, a new hideout and access to high-tech equipment. Storm cleansed the town of the the Reavers' filth with a cleansing rain and the X-Men quickly made the town their home. [Uncanny X-Men (1st series) #229]

At some point during the X-Men’s residence there, a group of time-traveling mercenaries called Kether Troop, under orders from their employer, Mys-Tech, arrived in the town via wormhole. Because no one was home but Wolverine, it fell entirely on him to defend the residence. Wolverine killed three members from Kether Troop, but not before they downloaded sensitive data about the Reavers and the X-Men and returned to their native timeline. [Warheads #1]

Eventually, the X-Men's new clandestine approach and the team itself began to unraveled. They first lost Madelyne to madness and magical corruption. [Inferno crossover] Although the team picked up a young mutant squatter named Jubilee who lived among them in semi-secret, they started seeing less and less of Wolverine, who kept taking extended trips to Madripoor. While he was away on one such trip, Rogue plunged through the Siege Perilous to stop a dangerous villain. Longshot, racked with self-doubt, soon left the team. Nanny and the Orphan-Maker then kidnapped Storm and tricked the other X-Men into believing she was dead. [Uncanny X-Men (1st series)#244, 246-247, 248] While the remaining X-Men were away on a mission, the Reavers, led by Donald Pierce and Lady Deathstrike, retook the town for themselves and crucified Wolverine when he returned home. Rather than face them and risk death, Psylocke coerced her teammates into traveling through the Siege Perilous. Jubilee finally came out of hiding to rescue Wolverine and the two of them fled the town together. [Uncanny X-Men (1st series)#249-251, 252-253]

With the team dissolved, the Reavers once again claimed the town – and Gateway – as their own. When Rogue emerged from the Siege Perilous, she was surprised to find the Reavers active in the town once more. By this time they were allied with Donald Pierce and Lady Deathstrike who used the town's advanced technology to upgrade their cybernetics and bolster their ranks with new recruits who they transformed into cyborgs. [Uncanny X-Men (1st series) #269] The Reavers’ second occupation of the town was short-lived, as a mutant from the future pitted his advanced Sentinels against the Reavers, killing several of them and dissolving the gang. [Uncanny X-Men (1st series) #281]

The town was empty during its next two visits. In its first, Wolverine and Jubilee returned to the ghost town to collect some information. Instead, they discovered evidence of both the Reavers’ nefarious activities and their grizzly defeat. [Wolverine (2nd series) #72] Later, after the destruction of the orbiting space station Avalon, Cyclops and several of the Acolytes crash-landed in the Australian Outback. Based on his knowledge of approximate location of the ghost town the X-Men once called home, Cyclops led the survivors to Cooterman’s Creek and sent a distress signal for help. He managed to reach Professor X and noted that someone had occupied the town recently. [X-Men (2nd series) #44]

Word about the viability of the Cooterman’s Creek compound must have spread amongst the Acolytes, however, as a small group of them soon moved their and claimed it as their home. They intended to use the place as their headquarters while they worked with Exodus to resurrect Avalon. Upon learning that his former allies now occupied Cooterman’s Creek and were taking orders from Exodus, Colossus and his Excalibur teammates traveled to the town to talk some sense into the them. Colossus braved the fields of land-mines surrounding a secret entrance and entered the compound alone. Ultimately, though, he failed to deter the Acolytes from following Exodus’s path. [Excalibur (1st series) #106] 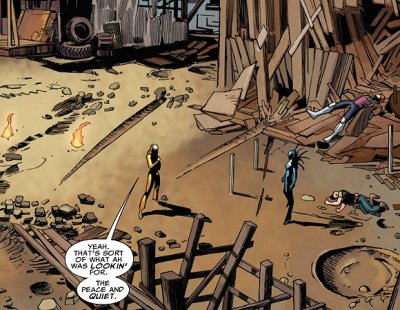 Sometime much later, Rogue – after purging her mind of several million accumulated consciousnesses – returned to the abandoned ghost town to meditate. While there, she encountered Danger (the X-Men’s Danger Room personified) and some pirates from a Shi’ar salvage ship. During the ensuing conflict, Danger lost control and converted the entire town into a hard-light simulation designed to help Rogue confront her inner demons. Professor X and Gambit arrived and helped both Rogue and Danger gain control over themselves. [X-Men Legacy #215, 220-224]

After the X-Men left town, Lady Deathstrike and the remaining Reavers reclaimed it as their headquarters and used it to stage an attack on the X-Men. However, their plans were foiled by X-Force, who completely wiped them out and once again restored some peace and quiet to the isolated ghost town in the heart of the Australian Outback. [Uncanny X-Force #5.1]