Characteristics of the Town

Cooterman’s Creek is a one-street town, with one main road running through its center and buildings clustered on either side. In the center of the town is the Desert Rose Hotel, a multi-story building the X-Men used for lodging. The main entrance boasts a grand staircase and a chandelier. [Uncanny X-Men (1st series) #239, 252] When the X-Men first arrived in the hotel after kicking out the Reavers, it was absolutely filthy. Storm cleared it out with a flash monsoon and Havok burned all the refuse in a pile in the center of town. [Uncanny X-Men (1st series) #230]

With the rubbish purged, the X-Men claimed bedrooms and decorated them to their own liking. Dazzler, for instance, outfitted her bedroom with recording equipment, a stereo, a collection of music and several posters of musicians, including herself and Lila Cheney. She even had the luxury of a walk-in closet. [Uncanny X-Men (1st series) #247]

Rogue customized her room to her tastes as well but, during a period in which the Carol Danvers side of her persona took over, she redecorated her room to the former Ms. Marvel’s liking – much to Rogue’s chagrin. The sleek, new decorations included modern artwork and minimalistic furniture. In a fit of rage, Rogue hurled several large pieces of the new furniture through the wall and into the road. [Uncanny X-Men (1st series) #244]

While unconnected on the surface, the buildings in the town are connected to each other by a series of underground tunnels and a sewer system. Also underground are the massive vaults in which the Reavers stored their stolen treasure. Longshot discovered these vaults and the mountains of treasure within after traveling down long, abandoned, dimly lit mining corridors. His psychometric powers allowed him to sense the history of each item and the X-Men worked to return these stolen goods to their rightful owners. These wealth reserves were so vast that even after the X-Men's efforts, piles of gold remained that were large enough to strike awe in Jubilee. Havok added an additional entry point into this underground system when he fired his plasma beam into one of these underground treasure vaults, inadvertently creating the entrance Jubilee would later use to sneak into the town. [Uncanny X-Men (1st series) #229-230, Uncanny X-Men Annual #13]

While squatting in the complex, Jubilee spent much of her time navigating the town via this sub-system and became quite familiar with its intricate system of tunnels. Her stealth allowed her to pilfer food and other necessities from the X-Men. She even created a bedroom for herself hidden away in the labyrinth, which she later used to nurse Wolverine back to health after his crucifixion. [Uncanny X-Men Annual #13, Uncanny X-Men (1st series) #252, Wolverine (2nd series) #72] 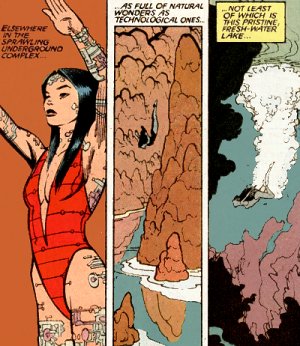 The sewer system and underground network of tunnels also abuts a vast water reservoir. On one occasion, the Reavers ruptured a wall adjacent to this reservoir and caused a flood within the tunnel system. [Uncanny X-Men (1st series) #252]

The water in the underground lake, meanwhile, is fresh, cold and ideal for swimming. Psylocke, Jubilee and Lady Deathstrike all swam in it during their respective stays in the town. [Uncanny X-Men (1st series) #239, 248, Annual #13, 253] The X-Men also used this vast, cavernous space as their training grounds from time to time. Like much of the town, the water cavern is outfitted with giant screens adorning the walls that display security footage taken throughout the compound. When a cybernetic dingo attacked Jubilee near the pool, the wall-to-wall screens displayed the scene from the dingo’s point of view. [Uncanny X-Men Annual #13] 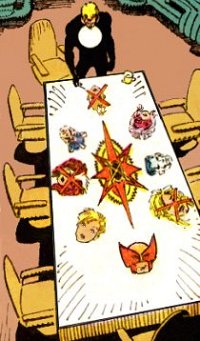 Meanwhile, in the basement, after a corridor of darkened hallways lies the command center. This large, cavernous room housed the central computer for the facility’s security and surveillance systems and doubled as the team’s conference room. Havok built a table in this room with enough places to seat all eight X-Men. In the center of this rectangular table, Madelyne Pryor painted the eight-point star sigil she designed during her time with the team and even painted each team member’s face at the point of each star, indicating their seat. In a rather dismal fashion, Havok would cross off the faces of the lost X-Men when they died or left the team. [Uncanny X-Men (1st series) #249] Meanwhile, the advanced computer system outfitting this room boasted technology so advanced that it confounded not only the X-Men but eventually its creators, the Reavers. More mystery surrounds this computer than perhaps anything else about the town.

Click the image to the left for a detailed look at the tabletop.

As additional security features, the buildings in the town are equipped with automatic weapons that fire on intruders, and the town itself is surrounded by land-mines. The X-Men programmed these mines to be mutant-signature sensitive; they would detonate when any mutant approached, saved for the ones pre-programmed as safe. This short list of safe mutants consisted solely of the eight mutants who lived in the town: Colossus, Dazzler, Havok, Psylocke, Rogue, Storm and Wolverine. It is unknown whether Longshot, a non-mutant, would have detonated them. [Warheads #1, Excalibur (1st series) #106]