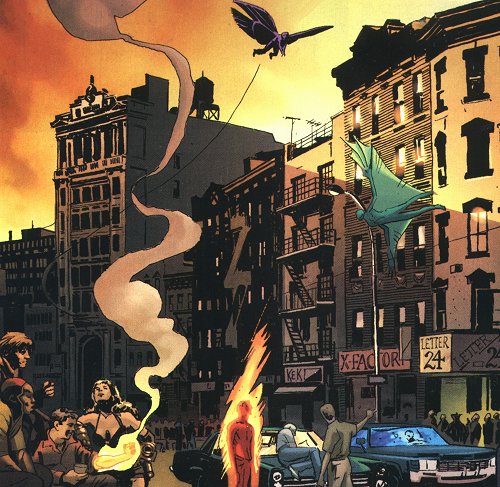 District X, also known as Mutant Town, was an area of New York City located somewhere in Alphabet City between the Bowery and Chinatown. It was indistinguishable from many other suburbs except for one unusual feature. District X was the home for not only normal humans but a much higher than average number of mutants, many of whom came to the area from outside the country. Besides being in a foreign land and having to come to terms with the existing culture of the city, their mutations add to their alienation. These people weren’t the heroes, or the understood. They were the freaks, the outcasts; the ‘muties.’

District X had the highest unemployment rate in the USA, the highest rate of illiteracy and the highest severe overcrowding outside of Los Angeles. It also had the highest crime rates in the country for narcotics, prostitution, vehicular theft and burglary, despite it being in a city that is supposed to be the safest major city in the USA. The high crime rates and the infusion of mutant abilities made the 11th Precinct one of the most challenging for the New York Police Department to “protect and serve.” Realizing that the efforts of human police officers to address the crimes in Mutant Town, the NYPD recruited help from the newly authorized X.S.E., a branch of the X-Men who have struck a deal with government officials to police mutant-related crimes. A long-time member of the X-Men, Lucas Bishop, accepted a new role as a peacekeeper in this emerging mutant ghetto. Two major players emerged as leaders in the organized crime in Mutant Town: “Filthy” Frankie Zapruder and Daniel “Shaky” Kaufman. Together, the pair of crime lords controlled ninety percent of the illicit activities in District X.

In addition to mutant-run gangs, District X was the home to mutant businesses that catered to its diverse population as well as mutant-friendly humans. As the mutant population continued to grow, a prominent mutant culture was also emerging with District X the center of this fringe movement. Mutant artists, performers and fashion designers represented a “cutting edge” cultural influence and lived amongst those mutants who were just trying to make an honest (or in many cases, dishonest) living.

Mutant Town has undergone a dramatic change since the effects of M-Day, a worldwide phenomenon unleashed by the Scarlet Witch that rendered roughly 95% of the mutant population powerless. Not only did mutants lose their special abilities but the mutant genome was entirely eradicated. As a result, there is only a handful of mutants left in District X. Those who were once mutants must now face a life as a baseline human. For some, this is a release from a life of isolation and pain. For others, they will never feel whole again. How this will shape the community and the lives of its residents remains to be seen.

Note: The 11th Precinct no longer exists in New York City and is entirely fictional. It may be no coincidence that the 11th Precinct is also the setting for the TV show, NYPD Blue and the Witchblade comic and TV series.