The inaugural project carried out by the Weapon X Program was, of course, the Adamantium bonding process as applied to subject Logan. Once the Adamantium reservoirs were filled and the tank was prepped, Weapon X field agents retrieved the unwilling Logan from his favorite watering hole and subjected him to the experiment that very night. The project's staff was caught completely off-guard by Logan's healing powers during the procedure, and by the additional drain on the Adamantium reservoirs when it came to the bones in his hands. The Professor had to talk fast to cover up his unfamiliarity with his test subject's capabilities, as he had "selected" Logan when Romulus commanded him to do so, and hadn't run the full background report on the subject he claimed. 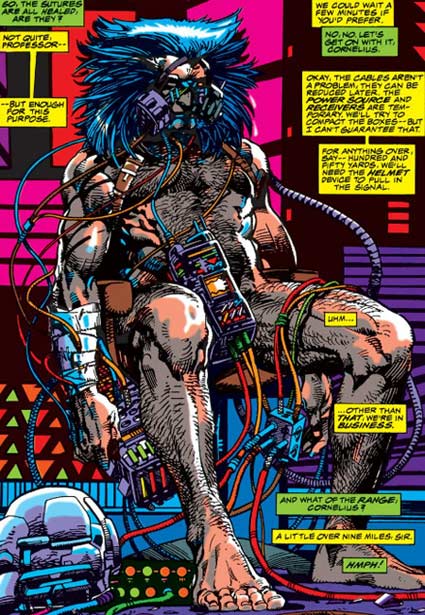 The trauma of the experiment left Logan in a near fugue state, his conscious mind completely withdrawn from reality as his healing factor tried to protect him from the experience he had undergone. In the weeks that followed, the Weapon X Program began installing the behavioral control programming that would allow them to direct their weapon as a killing machine. Early mechanics required Weapon X to be outfitted with a control helmet, wires and battery packs, giving the program command over his actions within a few miles broadcasting perimeter. Psychological conditioning was also carried out, planting commands in his subconscious with subliminal directives.

Weapon X was successfully re-engineered to function as a blunt instrument with minimal effort. Under controlled conditions, within the project's broadcasting range, he could be directed against an enraged grizzly bear and eliminate the threat in a matter of seconds. The control system was cumbersome, however, limiting Weapon X in terms of range, speed and adaptability. The Professor and his staff were in the process of adapting their weapon to overcome these hurtles when they employed a deep-emersion psychological scenario. Logan was allowed to live out a "revenge fantasy," breaking free and hunting down the Professor and his staff before "escaping" in his mind. This mentally embedded scenario (likely executed with the assistance of Aldo Ferro) succeeded in re-engaging Logan's conscious mind from beneath the animal exterior while still leaving Weapon X in control of his actions. 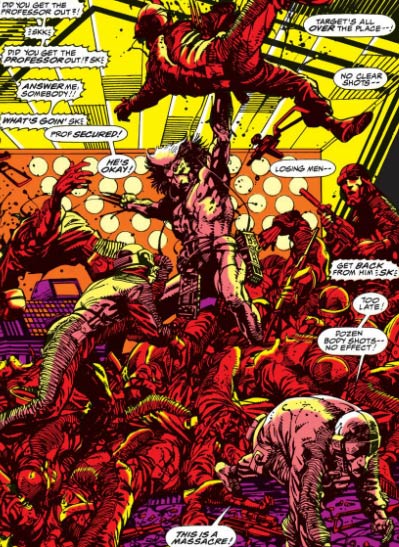 Unfortunately for the Professor, this control didn't last. Thorton's secret backer (unnamed, but almost certainly Romulus) engineered a security failure with the help of his hired agent, the Winter Soldier. He also remotely blocked out the Professor's console from controlling Weapon X's actions, leaving Logan free to carry out his own wishes. (With the enhancement work on Logan completed, Romulus never intended for someone else to have control over his favorite weapon.) In a combined state of both human and animalistic rage over what had been done to him, Logan clawed his way through Weapon X guards and Wranglers into the center of the complex to confront the Professor. He succeeded in removing one of the Professor's hands, but somehow Thorton, Hines and Cornelius managed to escape. Logan continued tearing through anyone and anything in his path until he reached the outer perimeter and escaped into the Alberta wilderness.