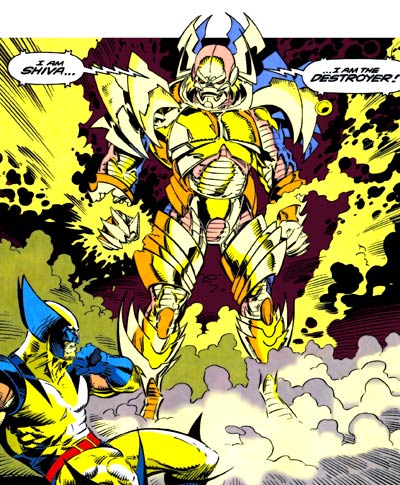 Although the government appreciated the idea of super-soldiers, programmable assassins and the "ultimate weapon," they had concerns about the Professor's ability to control his subjects. To appease their supervisors, the Weapon X project created the Shiva program as a failsafe against the experiments running amok. Anticipating that their sleeper agents in the field might somehow stumble across evidence of their own compromised memories, Weapon X covered their tracks with a deliberate trail of clues through government databanks and the experiments' own memory implants to lead them to Shiva. If the subject's search for answers dead-ended or if they gave up before finding Shiva, then the project security was still considered acceptably secure. If they made it as far as locating Shiva, however, project security was at risk and the Shiva program would activate to sanitize the subject pool.

Shiva was named after the Destroyer of Hindu mythology. It appeared in the form of an android warrior, covered in razor sharp blades and possessing tremendous physical strength and resistance to physical injury. In actuality, though, Shiva was not the android but the program running the android. Shiva utilized a tactically adaptive programming matrix that assessed each combat situation and adjusted its attack pattern accordingly. In other words, Shiva could not be beaten the same way twice. Shiva maintained a series of android bodies in storage which the program could customize and improve after each defeat. 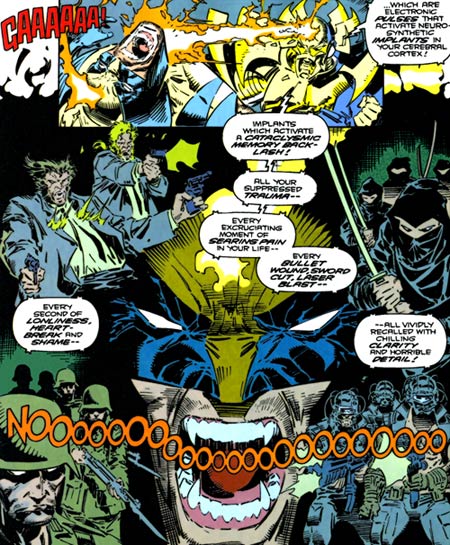 Besides its adaptability, Shiva's greatest asset against the Weapon X subjects was access to the memory triggers. An electro-encephalographic beam keyed to the neuro-synthetic implants of the agent could be emitted by the Shiva android, triggering a memory flashback. Shiva could force particular memories or cover identities to rise to the surface, or overwhelm the subject by forcing them to relive every physically or emotionally painful memory the Weapon X project was privy to, causing every pain the subject ever experienced to strike them all at once.

After the Weapon X Program went dark, Shiva was mothballed for over a decade before any of the subjects uncovered the secrets of the program. It was Wolverine who first unleashed the Shiva android after uncovering the Weapon X storehouse in Windsor, Ontario. A struggle between Silver Fox and the Professor in the central command center ended up causing the Shiva program to reboot and skip forward to the next name on its list of termination parameters: Sabretooth. Shiva androids were later seen pursuing both Sabretooth and Vole, and another was reactivated years later by agents of Romulus to eliminate one of his assets in the White House.