Part of the value of using Team X agents as test subjects is that Weapon X was able to build upon the existing memory implants of the agents. By "inheriting" the old Team X program's memory triggers and resources, Weapon X could pick up where they left off with new overlapping implants and cover identities programmed into their subjects. Weapon X employed various sets and sound stages to construct the memories they planned to imprint, and then physically place the subjects "on scene" in order to make the implants seem more realistic. Sets were reused to save money, and so Silver Fox's apartment in San Francisco was also the scene of a federal bust on grass-roots revolutionaries in Windsor. 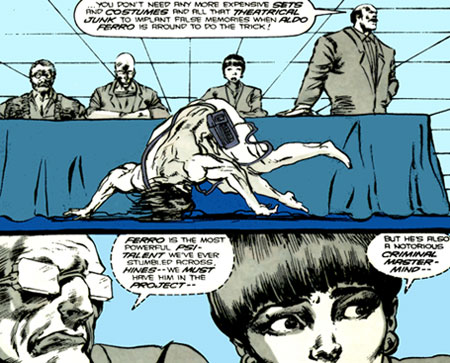 During the development of the memory implant procedures, the Weapon X Program recruited an outside contractor to improve the process. Aldo Ferro, the Sicilian Mouse, was a mutant telepath and crime boss who lent his psychic skills to the program in exchange for sampling the age suppression factor they extracted from their agents' healing factors. Ferro's assistance renovated and revolutionized the memory implants, as his psychic abilities enabled Weapon X to imprint the false memories directly onto the subject's mind. 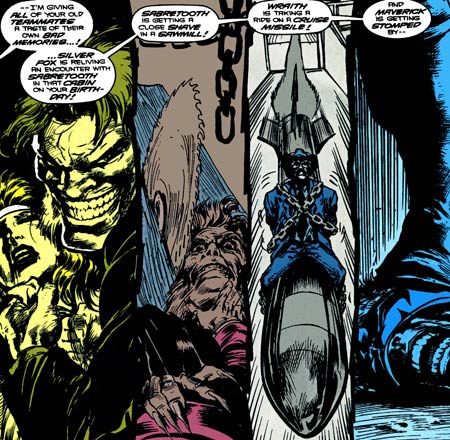 Sadistic by nature, Ferro cooked up some pseudo-psychological reasoning to explain his interest in grafting the memory implants onto the pain centers of the subject's brain. He created a process of using genuine moments of physical or emotional trauma as a starting point for his implants, constructing the false memories around that moment to make them seem more realistic. The Weapon X Program could then trigger that particular memory implant by forcing the subject to recollect the trauma Ferro associated with that set of false memories.

By this point, Weapon X subjects could have at least four different set of memories for a given period in their life: their original memories, the Team X implants, the first round of Weapon X implants, and then the new implants constructed by Aldo Ferro. After the Weapon X Program's funding was cut back and the agents were released back into the general public, the program had few resources left over for monitoring and maintaining the subjects' progress. For the most part, they only had authorization to act if the program itself was in jeopardy of being discovered. Either by deliberate betrayal or simple lack of resources, the Weapon X Program never provided Aldo Ferro with the age suppression factor, forcing him to make his own arrangements to survive as the cybernetically reconstructed Psi-Borg.