The development of Weapon X is closely tied with another, initially unconnected program called Team X. Founded in the 1960's by the American Major Arthur Fredrick Barrington, Team X was a joint task force serving American and Canadian interests on black ops missions, particularly anti-Communist endeavors during the Cold War. Agents were culled from a variety of backgrounds and outfitted with experimental memory implants to ensure maximum deniability for missions. Team X operatives could be mentally "adjusted" to forget certain operations when not on duty, or remember missions that never actually happened to feed the enemy false information in case they were captured and tortured.

Behind the scenes, Team X was being manipulated by the international power broker known as Romulus. The full extent of his involvement in the genesis and maintenance of Team X is unknown, but Romulus often used Team X operations as a cover for his own interests. Two of Romulus' favorite pawns were field agents for Team X: Logan and Creed. The field work and memory implants were just the latest stage in Romulus' decades-long effort to shape Logan into the ultimate weapon, and Creed was his personal handler. Romulus had performed his own conditioning on Logan and his memories over the years, and so Creed was responsible for keeping Logan on task. 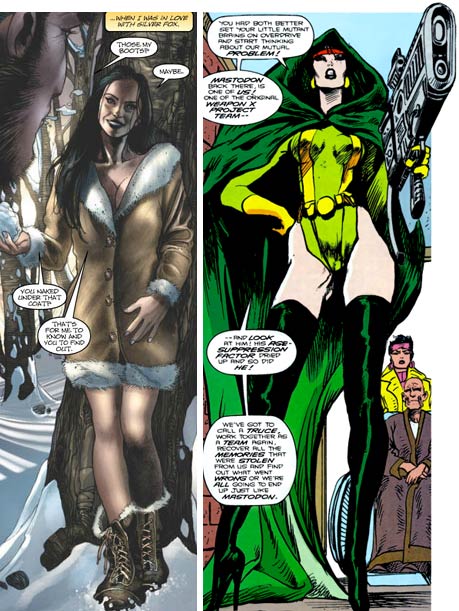 Although he was occasionally conscious of his status as a double agent, Logan was unaware of the extent of Romulus and Creed's involvement in his life at this point. Before Team X, Logan mostly remembered Creed as the man who killed his lover, Silver Fox, back when the three of them were living in the mining town of Mount Logan. And yet, Silver Fox was an active member of Team X as well. This discrepancy has never been fully explained. On the one hand, after having his full memory restored in House of M, Logan confirmed Silver Fox was killed by Sabretooth back on Mount Logan. On the other hand, a woman answering to Silver Fox appeared claiming to be a former member of Team X from decades after her alleged death. Although her actual presence among Team X in the 1960's hasn't been confirmed by a trustworthy source with trustworthy memories, there's no denying she exists—the woman appeared in the modern era, interacting with Jubilee and other characters unaffected by Weapon X's manipulations. So if Silver Fox died on Mount Logan, who was this woman? 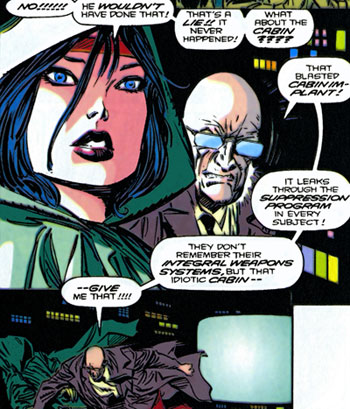 The following is pure speculation, but also the best answer available to us given the facts. Team X is confirmed to have used memory implants on its agents. Altering Logan and Creed's memories of Mount Logan would be within their power. It would also be convenient for Team X to prevent its top two field agents from trying to kill each other all the time, so altering any memories of their past grudge would be beneficial to Team X's agenda. Team X then introduced a body double of the original Silver Fox. This woman either naturally or surgically resembled the original Silver Fox, and her presence on Team X would have helped Logan and Creed accept their new recollections and at least partially ignore the instinctive hatred they felt for each other. With their memory implant technology, Team X could have easily made Silver Fox 2.0 believe she was the original to complete the illusion. This would explain why the Professor once referred to this Silver Fox's memory of the cabin as an "implant," despite the fact that the location actually existed.

Besides Logan, Creed and Silver Fox, Team X also employed agents named North, Wraith and Mastodon. David North was a former West German freedom fighter and a personal friend of Major Barrington's, recruited to Team X after he was forced to kill his own wife, a deep cover spy for the Russians. John Wraith was a company man, a CIA expediter and extraction specialist. By coincidence or the designs of Barrington or Romulus, both North and Wraith were also mutants. Little is known about the man codenamed Mastodon. Details about his background, mutant status and missions with the team haven't been revealed.

Team X is known to have been active between 1963 and 1968, well before the Weapon Plus program reached its tenth iteration. Why they ultimately disbanded has not been disclosed. The members mostly went their separate ways, but what they couldn't know is that their government files would be inherited by other agencies, and eventually used to bring them back together under the control of Weapon X.