Around the same time, Sean rekindled his relationship with Theresa somewhat. Visiting X-Force, he suggested that possibly it was too much to ask for to build a father-daughter bond but perhaps they could aim for a close friendship instead. Theresa happily accepted.

Only shortly afterwards, their paths crossed again. Black Tom Cassidy had been infected with a virus that slowly transformed his body into wood and only Deadpool’s healing factor seemed like a possible cure. While Siryn helped Deadpool in the conflict, Sean asked his old Interpol pal, Daniel Peyer, by now a high ranking officer, for some clue on their whereabouts. He didn’t suspect Peyer to still hold a grudge about the spoiled Almadovar job and his supposed-friend set him up, claiming to know nothing. Eventually, though, Banshee figured it out and not only helped his daughter rescue Deadpool, but also arranged that Black Tom got the required treatment before he was sent back to prison. [X-Force (1st series) #35, Deadpool (1st series) #1-4] 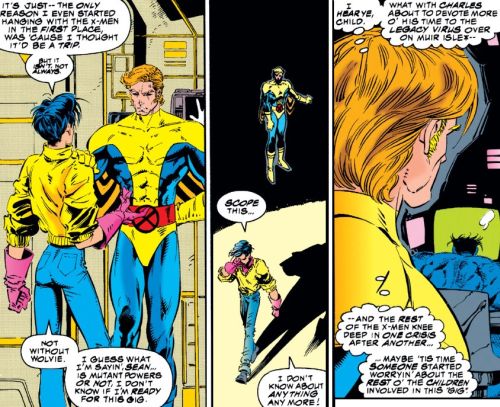 Back with the X-Men, Banshee noted that Jubilee was having troubles fitting in. With Wolverine having left, the youngster had lost her mentor and, between their missions, the other X-Men seemed too busy to care for the minor.

Sean was also around when Emma Frost finally awakened from her yearlong coma and learned of the death of her original students, the Hellions. Not having been a member of the X-Men when they battled her as the Hellfire Club’s White Queen time and again, Sean managed to gain some measure of empathy for the woman and her loss. [Uncanny X-Men (1st series) #313-314]

A couple of days later, after returning from another trip, Banshee noticed the X-Men’s suspicious behavior and found out that they had been abducted and replaced by the Phalanx. Freeing the few non-Phalanx left in the mansion, he had to team up with the unlikely partners of Emma Frost, Sabretooth and Jubilee to save a group of young new mutants the Phalanx were experimenting on.

Together, they tracked the youngsters to a freighter but, there, they ended up trapped by the techno-organic creature, who had kidnapped the teenagers. One of them, Blink, a teleporter, effectively dealt with the Phalanx but she was caught in the effect of her own power and Banshee found himself unable to save the girl. He helplessly watched, as her cascading waves of teleportational energy seemed to cut her apart and teleport her away. [The Phalanx Covenant - Generation Next]

In the aftermath of the battle, it was decided that Sean and Emma would share headmaster duties at the new Xavier’s school in Massachusetts, which the 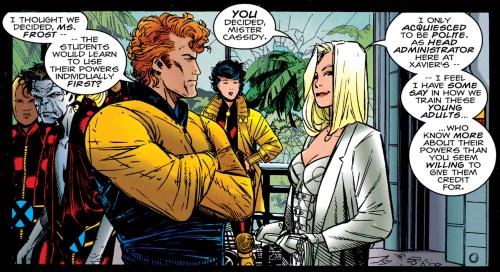 newly found young mutants and Jubilee would then attend. Despite the bizarre nature of the adventures that were to come, Sean enjoyed his new role as teacher, even though there soon developed some considerable friction between him and Emma, as none of them were happy with each other’s teaching methods, not to mention that Sean still distrusted Emma, fearing she’d misuse her telepathic powers. So, he warned her to stay out of his mind. However, slowly, they managed to develop a grudging friendly working relationship, based on mutual respect. [Generation X (1st series) #1-2]

Within the first months in Massachusetts, Sean was attacked by Omega Red irrationally seeking revenge for Sean’s involvement into his becoming the monster he now was. Sean was comatose and left for dead. It took the White Queen’s telepathic power to hold Sean’s mental energies together, while their charges of Generation X hunted down the villain, with Chamber eventually besting Omega Red. [Generation X (1st series) #10-11] 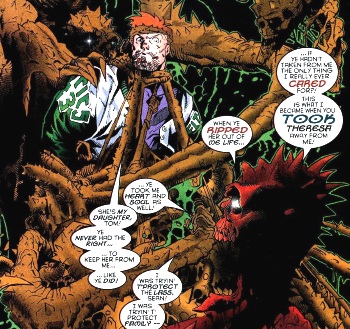 Some time later, Generation X were attacked by Sean’s cousin Black Tom, who, after having escaped from prison, had undergone a horrible change: more powerful than ever, after conducting experiments on himself, he was now more plant than human and had infiltrated Generation X with a spy - Mondo. The mentally unhinged Tom wanted revenge on Sean for “taking” away Theresa, so Tom figured he’d now take away Sean’s “kids.” Playing mindgames with Banshee, he ordered him to either kill Emma or lose the children. Not wanting to be responsible for the death of another group of children, Emma forced Sean to use his sonic scream on her. Tom was content but revealed he had been lying. He had no intention of returning the children and had long sent them away. Penance, the only student not captured by Black Tom, finally used her powers to get rid of Tom, and for the moment, saved Sean. [Generation X (1st series) #25] 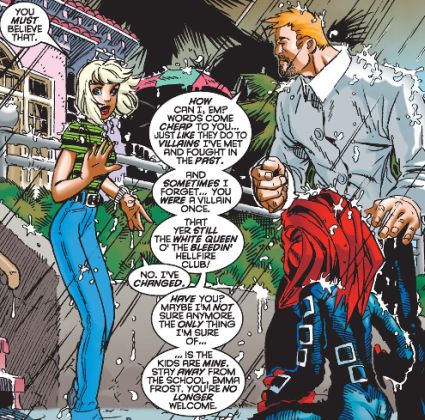 Fortunately, Emma survived, as she had only faked her death and, together, they tried to look for their missing students, an undertaking that was complicated as Operation Zero Tolerance, a mutant hunting operation by the government was in full swing at that moment, forcing Sean, Emma and Penance into hiding. Without any resources at their hands and the X-Men not answering their distress call, Sean and Emma were finally offered a deal by their enemy, Emplate - the location of the others if they returned Penance to him. Sean refused, while Emma was willing to play Emplate, not really intending to trade away Penance either. Sean’s distrust welled up again. He crashed the deal and told Emma to keep away from the school for now on. [Generation X (1st series) #26-31] 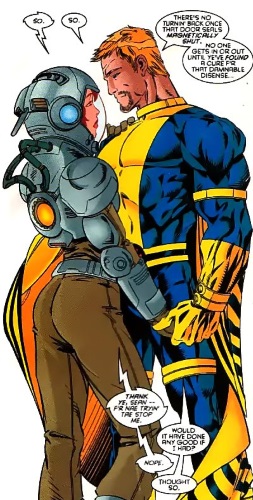 The children, in the meantime, safely returned, having managed to free themselves. Banshee paid a rare visit to Muir Island and his ladylove, Moira, who was now the only known non-mutant suffering from the Legacy Virus. Sean managed to coax her from her non-stop work for a bit, as they enjoyed some rare quality time together. However, only days later, the stubborn woman decided to quarantine herself in her own lab, with a pre-set locking mechanism that would only let her out once the cure was found. As Sean realized that he couldn’t talk Moira out of it, he did the only thing he could, encouraged her and promised her that he would wait. [Generation X (1st series) #32, Excalibur (1st series) #115]

When Sean returned to the school, Emma let him have a piece of her mind for the way he had treated her and hit him in the face. Eventually, they made up, though, and the two headmasters continued their supervision of their teenage charges’ through several bizarre adventures. [Generation X (1st series) #33-34] Upon learning that Siryn had lost her fight, her vocal cords being severed in a fight with Feral, Banshee rushed to X-Force’s new headquarters in San Francisco to stand by her side, but he found that his daughter wanted to spend some time alone to deal with her loss. Instead of turning to him, who once had gone through the same ordeal, she went to live with a distant aunt. [X-Force (1st series) #91]

At some point around Christmas, Black Tom and Juggernaut attacked them with their newest charge, the real Mondo (as opposed to the clone that had been living with Generation X for some time).