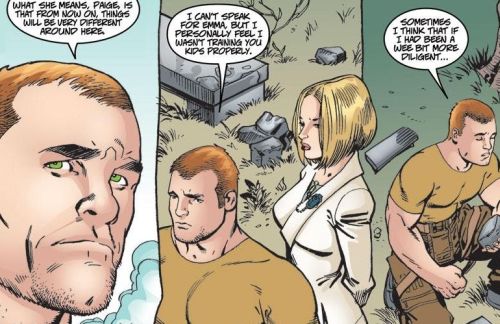 When Emma was broke, the school had been opened up to human students as well to raise some money. However, in the long run, this wasn’t working, as anti-mutant hysteria started among the students egged on by Emma’s mad sister, Adrienne, who had blackmailed Emma and Sean into granting her refuge. It ended in tragedy, as Adrienne had set explosives within the school.

One of the Generation X teenagers, Synch, died defusing one of them and, after that wake-up call, Sean and Emma decided they’d have to go about training the kids differently and give them a chance to become more proactive. [Generation X (1st series) #67-70] 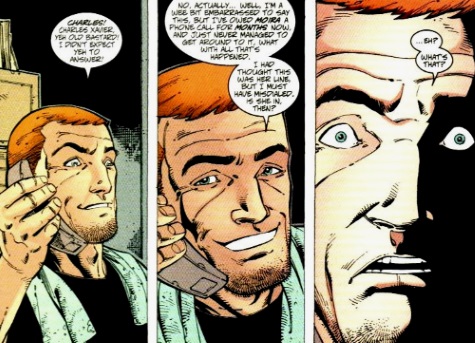 Soon thereafter, Sean’s life was about to utterly fall apart. Although Moira had been broken out of her quarantine station by the efforts of Excalibur, life had been rather busy for both of them and they had not seen each other for months. Now wanting to renew their relationship, Sean tried to call her but he was redirected to the Xavier Institute. The Professor told him that Moira MacTaggert had been killed only mere days ago, when the mutant terrorist Mystique blew up her lab complex. Sean almost died in an adventure after that, being unable to use all his wits and had to be saved by one of his students, Skin. [Generation X (1st series) #73]

In the following weeks, Sean succumbed to alcohol. In addition to that, Emma’s behavior became nastier and, when one of Generation X, Chamber, graduated to X-Man status, the other students felt that they really couldn’t learn anything at the Massachusetts Academy anymore. They told 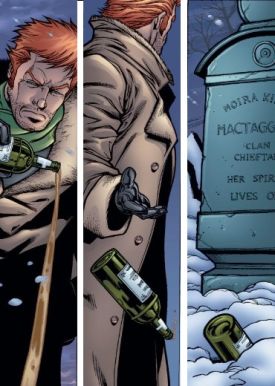 Sean that they’d decided to leave. Surprisingly, Sean took it well, telling them he was aware that he wasn’t handling his current situation well and that he’d decided to go on a vacation to Ireland. Telling them they were like his own children, he wished them all the best. [Generation X (1st series) #75]

After a lot of soul-searching, Sean finally vowed to give up the alcohol at Moira’s grave and came up with an idea of how to make his life worthwhile again. He founded X-Corps, a new paramilitary mutant police force with its headquarters based in Paris. X-Corps was meant to police the mutant population, making sure that mutants played nice with each other. The organization consisted of both volunteers, among them several former Generation X’ers who had decided to keep an eye on Banshee, and criminals, like the Blob and Avalanche, whom Sean forced into working alongside them, thanks to the telepathic powers of the imprisoned female Mastermind. [Uncanny X-Men (1st series) #401-403] 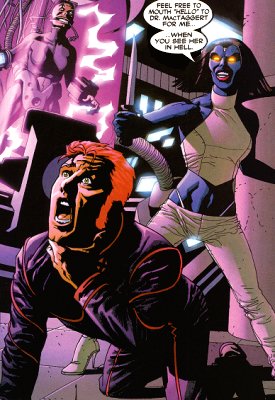 Sean seemed driven, much to the distrust of one squad of X-Men, who were wary about both Sean’s methods and the people he was working with. Turned out they were right, as his organization had been infiltrated by the shapechanging terrorist, Mystique. Mastermind and the other villains had been working for her all along. Mystique slit Cassidy’s throat and intended to use the organization he had built for her own terrorist goals, starting with the destruction of Paris. Banshee managed to stay conscious long enough to release one of their newest recruits, Abyss, who then sucked Mystique into his body - a dimensional portal, while the X-Men and the other X-Corps members prevented the destruction of Paris. While Sean was taken to a hospital to recover from both his injuries and his recent failures, X-Corps was effectively finished, its remains being absorbed into Xavier’s new X-Corporation. [Uncanny X-Men (1st series) #404-406]

Over the course of months, Sean’s throat healed enough for him to regain speech, though it seemed that he could no longer use his mutant powers. When Professor Xavier had gone missing, the X-Men asked Sean to travel to Muir Island in order to search through Moira MacTaggert's data for potential hide-outs of Xavier that his students didn’t know about. 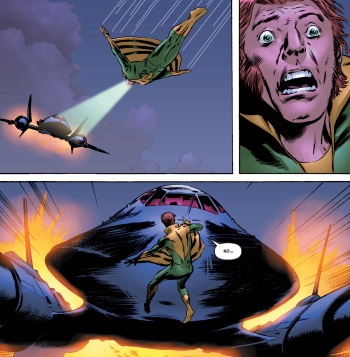 While Sean couldn’t find anything in that regard, he happened upon a quite disturbing file; apparently there had been another team of X-Men. Even though they weren’t ready for field duty, Xavier had sent them to rescue the original X-Men from Krakoa, but they failed. Sean considered this information too important to tell the X-Men on the phone about it, so he booked a flight to Westchester. However, the sole survivor of this secret X-Men team, Vulcan, didn’t want the X-Men to learn of his existence just yet. He stole the X-Men’s Blackbird and directed it towards the plane that Banshee was on. Trying to save the other passengers, Sean jumped out of the plane and, while he did manage to get out a sonic scream, it lacked the substance to stop or even slow down the approaching jet. He was crushed between the two aircrafts when they crashed into each other. In light of Vulcan later revealing the existence of the second X-Men group himself, Sean’s tragic death seems even more pointless. He was buried in the memorial garden of the Xavier estate. [X-Men: Deadly Genesis #1-3, 6]

Still, death was not the end of Banshee and forces would bring him back to the world of the living a number of times. In the first instance, when Selene used the transmode virus to resurrect thousands of dead mutants, Sean found himself under the sorceress’ control and was forced to attack his friends amongst the X-Men. While he managed briefly to regain his free will, Selene’s control was too strong. He was returned to death when Selene’s plans were thwarted. [Necrosha crossover]

Sean’s rest however was brief. During the events of the Chaos War, the gates of the underworld were opened and Banshee found himself alive once more, alongside a number of other deceased X-Men at the X-mansion. As a bonus, he was also reunited with his late love, Moira McTaggart. 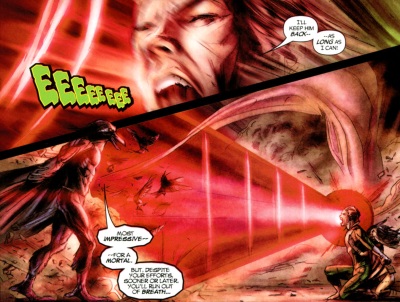 Searching for clues to their situation, they were attacked by a servant of the Chaos King, known as the Carrion Crow, before fleeing to Muir Island, losing some comrades on the way.

Banshee was forced to watch as his love Moira transformed into Destiny, a side effect of touching the diary. Her personality now dominant, Destiny explained her plan to use lay lines to summon the primordial spirits of the Earth to Muir Island to fight the Chaos King. To protect her while they enacted their plan, Banshee unleashed a powerful scream to destroy the Carrion Crow’s portal. Seconds away from being killed by the Carrion Crow, the pair were saved by Thunderbird, who had been empowered by his namesake deity with extra powers. After the Chaos War ended, Banshee and the others were returned to the afterlife. [Chaos War: X-Men #1-2]

Later, Sean’s body was abducted by the Apocalypse Twins and resurrected using a Celestial Death Seed. Brainwashed by the twins and imbued with great power, he became one of the twins’ Four Horsemen of Death. Bitter over his death at the hands of a Summers (Vulcan), as well as Cyclops’ recent murder of Charles Xavier, the brainwashed Sean eagerly attacked Havok and his fellow Avengers Unity Squad members on behalf of his masters. 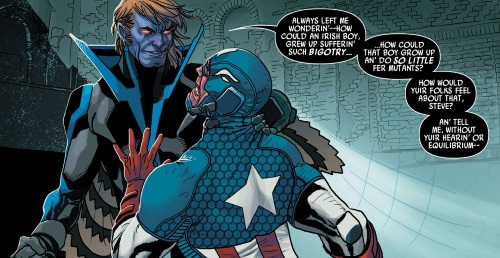 Banshee also felt particular animosity towards Captain America, who he felt should have done more for mutant kind, having experienced persecution himself as a child of Irish immigrants. With his enhanced powers, Banshee made short work of both Havok and Captain America, until Wasp flew into his mouth and blasted his throat open from this inside. Havok’s Avengers squad took custody of Sean’s inert body and placed it in a curative stasis chamber that will gradually expunge the influence of the Death Seed. [Uncanny Avengers (1st series) #9-13, #24]

Only time will tell if Sean will return to the land of the living again. However, with the combined efforts of the Avengers and the X-Men, and his track recording for escaping death, it's likely Sean won’t be gone forever.