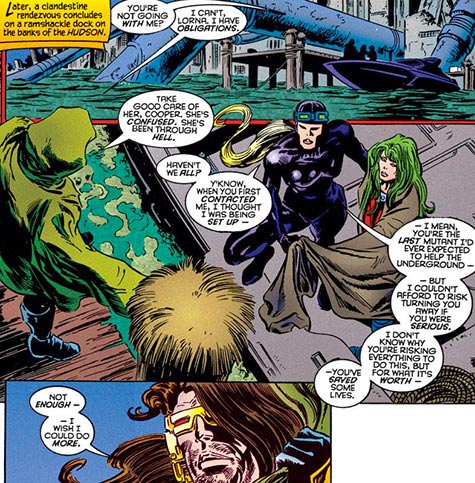 In the Age of Apocalypse, a dire reality ruled by the tyrannical mutant, Val Cooper was a member of Underground, a secret organization of human rebels who helped smuggle mutants from Apocalypse's Manhattan domain. She was surprised to receive a call for help from Cyclops, one of Sinister's adopted sons, who had rescued Polaris from Sinister's breeding pens. Val meet with Cyclops on the Hudson River and took Polaris to safety.

In a reality where Val Cooper was elected president of the United States, her first act in this new pro-mutant America was to end the trade embargo with Genosha and call for peace between mutants and humans. Unfortunately for mutant kind, Val, along with Magneto and Quicksilver, was assassinated by the Friends of Humanity. Val's vice-president, Carl Denti, followed in Val's political stance against the wishes of his cabinet, pushing to continue to lead the pro-mutant America, despite further threats from the Friends of Humanity. [X-Men: Millennial Visions] 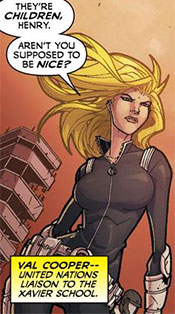 In the reality known as The End, Val Cooper was Secretary of Homeland Security. She was apparently killed and subsequently impersonated by a Warskrull, who attempted to kill the mutant Sage. The Warskrull was defeated by members of the XSE and then killed by Sage. It's not clear whether (despite apparent confirmation of death) Val's death was a cover-up or if she was somehow resurrected, as some years later she was working in another high-powered government role within SHIELD as United Nations liaison to the Xavier School. She showed up at the X-Men's home early one morning, concerned about the possible danger that might arise by the mutant No-Name being missing. Val later took the mutant criminals Shadow-X into custody and gave the Beast some advice about the young mutants in his charge.

In the Ultimate Universe, Valerie also worked within the United States government in the role of “Special Advisor to the president on Superhuman and Mutant Affairs.” Val was having a catch-up with a reporter, who revealed that she had acquired a file about the history of mutants and that she was going to air with her report that day. Val played it cool, but left the meeting and tried to contact the president to let him know that the world was about to find out the United States government created mutants. In the fallout of the announcement going public, Val fielded questions at a tense press conference. 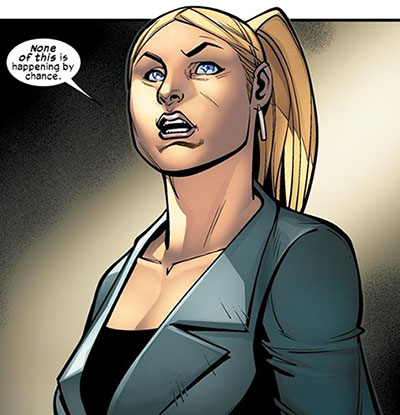 Afterwards, an unimpressed Val was met by Quicksilver, who warned her that there was going to be a lot of trouble now that the information about mutants' origins was public, and suggested to her that the United States government might handle this trouble using the mutant-tracking Cerebra technology. When William Stryker Jr. launched an attack in New York, Quicksilver persuaded the president that he needed the Cerebra technology to deal with these threats. Despite Val's urgings, the president agreed. Val believed that what was transpiring couldn't be a coincidence and decided to look into Stryker’s past, soon discovering that Stryker himself was a mutant – with the ability to control machines. Though he was killed during the battle with his Sentinels, Stryker’s consciousness was transferred to the Nimrods. Val scolded the president for his actions. When the Stryker-Sentinels launched an all-out attack on the United States, Val was in the White House and could only watch on in horror.