Fresh out of college and eager to begin her career in government, a young Valerie Cooper was recruited by a group she believed to be a government organization, who told her they were developing international policy on what they called “the emerging trend of the world's expanding mutant population.” Although she had no deep interest in mutants, the pay was good, so Val accepted. Her first project for the organization was to work with a young mutant named Kyle Gibney. As Kyle’s uncontrollable abilities seemed tied to his emotions, Val was tasked with getting him in touch with them. As she had been told that Kyle had been brought to the department by his parents, who were seeking treatment for him, Valerie didn't believe Kyle's story that he had actually been kidnapped.

In fact, Kyle had been telling the truth and the department heads were only interested in turning Kyle into a savage killer. Val slowly built a rapport with Kyle, eventually befriending him. Val's work with Kyle proved successful, at least in the eyes of the organization, when Kyle became the feral beast they wanted. The department immediately took Kyle away and Val was only told that he was shipped to Canada for intensive psychotherapy. [X-Factor (1st series) #142]

Around this time, Val Cooper was earning her PhD at college where she met with Julia Cornwall, an undergraduate, and the two played tennis together. [Avengers West Coast (2nd series) #84] Soon after, Val moved on to her next job, this time working for the United States government. However, during this time, she learned that the organization she used to work for was called the Secret Empire and had shipped Kyle back to the States to be shown off to “interested parties.” Val snuck into their facility to see him, but Kyle had been completely transformed into a savage creature and she knew she could do nothing to help him. Soon after, Val married a fellow government agent, Edmound Atkinson, but their marriage did not last long, as their careers drew them in separate directions. [X-Factor (1st series) #142] 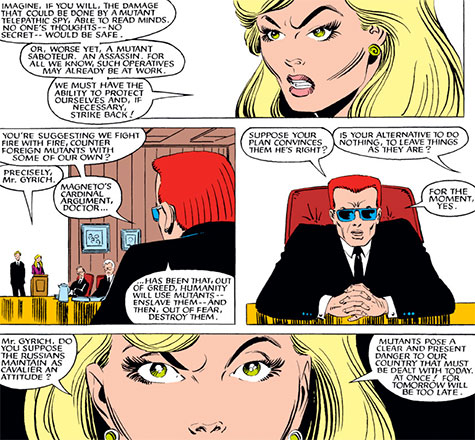 In her first job for the U.S. Government, Val was appointed Special Assistant to the United States president's National Security Adviser. She made a stellar debut at a meeting of important government officials, where she demonstrated a somewhat harder attitude than she previously had in dealing with Kyle Gibney. Val was now of the belief that super-beings posed a danger to the safety of humankind. In particular, Val's concern was with mutants. She urged the officials that the United States' government must have the ability to protect themselves, and strike back if necessary. It was during this meeting that Val met, and debated with, Henry Peter Gyrich. [Uncanny X-Men (1st series) #176]

Mutants weren't Val's only focus in her important role. As she was of the view that superhumans who battled crime without the government's approval were a problem, she turned her attention to developing super-beings that the government could control. 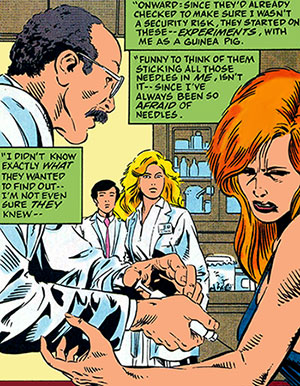 As such, Valerie began her career-long stint with the Commission on Superhuman Activity and so, early in her career, was appointed the acting head of the Commission. Working with an elite team, Val began a project to create a team of super-heroes that reported to the government. When Val's team was sent to the Amazon to extract serum from special plants, Val had a test-subject for this serum in mind – her old college pal, Julia Carpenter née Cornwall, now divorced with a daughter and in some financial strife. Val arranged to meet with Julia and offered her a job in Washington.Julia accepted and, once she had been injected with the serum, Val's elite team subjected her to a barrage of tests. However, it wasn't the serum from the Amazon plant that imbued Julia with extraordinary abilities, but a lab error. Injected with a spider serum instead, Julia gained spider-related powers and was thus dubbed the new Spider-Woman. As such, Julia was Val's first successful project and was under the employ of the Commission. [Avengers West Coast #84, Spider-Woman (2nd series) #2]

Valerie's time in the National Security Council and Commission on Superhuman Activity also coincided during the early days of Senator Robert Kelly's Mutant Affairs Bill. Around this time, Valerie began working alongside Raven Darkholme, deputy director of the Defense Advanced Research Planning Agency. Unknown to Val and all of her colleagues, though, Raven was actually Mystique, leader of the Brotherhood of Evil Mutants, who had infiltrated DARPA for her own ends. When Valerie made her views on mutants very plain to her, Raven/Mystique saw Val as a threat, one that she would destroy. 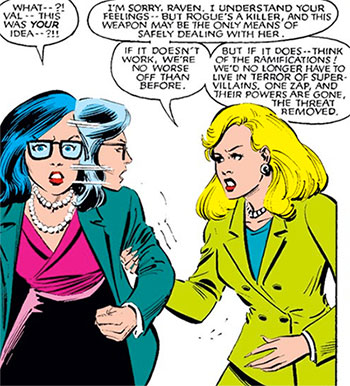 It was through Raven that Val was introduced to the inventor called Forge, who was given an assignment to create a weapon that would neutralize the superhuman abilities of paranormals, mutant or otherwise. However, upon completion, the untested weapon was taken by the National Security Agency, who planned to use it on the X-Man Rogue, whom they deemed a major threat. Val tried to reiterate the benefits of the untested weapon to an upset Raven, who of course tried to hide her concern for Rogue's safety. Despite Raven objections over the untested weapon, Val and the NSA went ahead with their plan and tracked down Rogue at her home in Mississippi. Val accompanied Henry Gyrich and his team on their mission, though things went awry when Rogue’s fellow X-Man, Storm, interfered and it was she, not Rogue, who was shot by Gyrich and had her powers neutralized. [Uncanny X-Men (1st series) #183-185]

Despite his error, Gyrich’s hunt was still on for Rogue. When Val met with National Security Council agent Phillip Rosen, her dislike of Gyrich became evident when she hoped that Rogue and Gyrich would kill each other. Rosen thought to himself that the mishap with the neutralizer assignment would probably cost Val her career but he would never learn whether he was correct, as he was slain soon thereafter by one of the Dire Wraiths, an alien race that were planning to infiltrate the world's governments by killing important figures and taking their form. The Wraiths saw Val as one such important figure and, after one of them took the form of Phil and went to Val's hotel room, the Wraiths revealed themselves and attacked her. Fortunately for Val, Rogue was nearby and she engaged the Wraiths, while Val fought the Wraith who had taken Rosen's form. Val knew that once Rogue was done with the Wraiths, she would come after her, so she got some quick answers from the Wraith posing as Phil, before shooting it and rushing out into the night. Fleeing to her car and

away from Rogue, Val heard a scream and wondered if the Wraith had killed the X-Man. In fact, Rogue had destroyed the Wraiths and even took on part of the Wraiths' persona, due to prolonged physical contact. Though Val sped away in her car, Rogue caught up with her and Val was knocked out when Rogue touched her, absorbing some of Val's memories, including how she was the intended target of Forge's neutralizer. Rogue left Val alive, but vowed to come back for her if Storm was dead. [Uncanny X-Men (1st series) #186]

When Kulan Gath transformed part of Manhattan into the barbaric state of the ancient and forgotten Hyborian Age, Val chaired a meeting of the National Security Council who were discussing the threat. Not only did the transformation threaten to spread further across New York, but among the transformed population were the city's super heroes, who were possibly the only chance of saving reality. It was during this meeting that Val expressed a softer side towards mutants, grouping members of the X-Men alongside Avengers, who had been spotted in the transformed Manhattan. She told her colleagues that the world was looking to them to sort this situation out before it spread – even if that meant hoping the mutants would give them a second chance and help save reality. Eventually, the heroes managed to defeat Kulan Gath and the transformation of the city was undone. [Uncanny X-Men (1st series) #190]

One evening, Val arrived home to discover herself sitting on the sofa. In fact, it was a disguised Mystique, who had come to see Val with a proposition. Mystique, as Raven, knew of Val's desire for a team of super beings that the government could control and suggested to her that her Brotherhood of Evil Mutants change their “evil” ways and start to work for her, as Freedom Force. Mystique assured Val that Freedom Force would work for her and the president, and that they would do as they were told. Val was intrigued by the idea and offered Mystique and her teammates a full pardon, but on several conditions. She also proposed a trial run and enlisted Mystique and Freedom Force to capture Magneto. [Uncanny X-Men (1st series) #199] 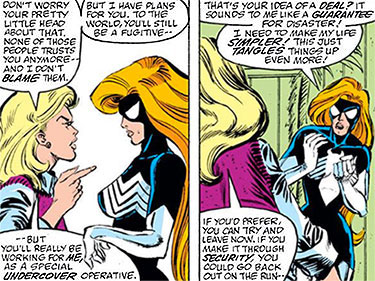 Furious at the betrayal of her pet agent, Val cleverly convinced Iron Man to track Spider-Woman down, explaining to him that Spider-Woman had to pay for what she did and that her family and friends were under surveillance. Val believed Spider-Woman might seek refuge with the Avengers and warned Iron Man that there was a bounty on her head and that if Freedom Force were to seek out their old teammate, they may not be forgiving. When Spider-Woman eventually turned herself in, Val gave her a new assignment, working as a special undercover operative, not that Spider-Woman had any choice in the matter. [Iron Man (1st series) #214]

When the Commission on Superhuman Activity began to take issue with Captain America, specifically the fact that he would not agree to being under the direction of the US government, the star spangled Avenger surprised them all by resigning. Shocked at this move, the Commission was at odds with each other over how to move forward. Some wanted Steve Rogers brought up on charges, while Val pushed for finding a new Captain America so that the Commission would avoid bad publicity. It was Val who suggested John Walker, the new hero known as Super-Patriot. Walker was intrigued by the offer Val made to him and accepted.

In an attempt to control him and forge him into the Captain America that the Commission wanted as their employee, Val acted as Walker's handler as he transitioned into the role of the new Captain America. Some duties were easy, such as pitting him against Freedom Force for training, while others were less pleasant, such as having to deal with his creepy ex-manager, Ethan Thurm. She was eventually instructed to continue in this role overseeing John Walker on behalf of the Commission. During this time, Val found herself admiring Walker's dedication to his new role. [Captain America (1st series) #334-335]

Aside from her duties with Walker, Val still maintained control of Freedom Force, at least administratively. This was much to the annoyance of Mystique, who continued to maintain her secret, dual identity as Raven Darkholme. When Val inducted three new members into Freedom Force, Mystique reminded Val about the trouble her last recruit into the team caused, a charge for which Val accepted responsibility. At a press conference to introduce the new members of Freedom Force, Val was queried by a reporter as to why all of Freedom Force were former criminals. Val explained that she “set the fox to catch other foxes” and re-iterated that superhuman vigilantes were not a law unto themselves and must be regulated. [Uncanny X-Men (1st series) #223-224]