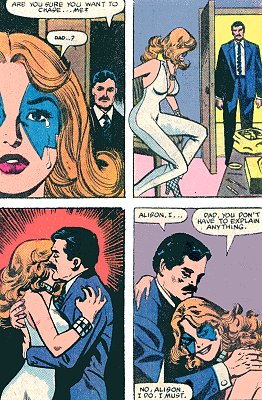 Angel tried to find out about Dazzler’s mother by talking to Bella Blaire, her grandmother, but she refused to give the family secret away. Instead, she told him that Carter Blaire could not handle that his daughter abandoned him. He was sitting alone in his room, brooding, and none other than Alison could snap him out of it. Once Warren took Alison home, she and her father had a talk and they got into another argument. Carter finally admitted that he forbade Alison to get involved with music, as he wanted to prevent her from becoming like her mother, who left her family for her career. Alison refused to believe him and left in tears.

Returning home, she was quite surprised to find out that Harry Osgood had arranged a gig at Carnegie Hall for her. Although it slightly bothered her that for the charity event she had to ask her superhero friends to appear, Dazzler couldn’t resist this chance in a lifetime. Shortly before the concert, Carter came to see her behind the stage. Father and daughter made up with each other as he realized that, if he continued to push her away, he would loose Ali forever. Dazzler, in turn, put on her coat, ready to turn her back on the entertainment business. She was annoyed by people that offered her drugs and that she only got the gig because of being good friends with the Avengers. 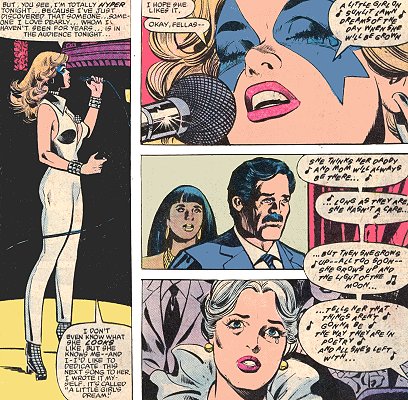 However, Vanessa, a fellow singer and good friend of Ali, stopped her from leaving. She had recently discovered that her singing teacher, Barbara London, was nobody else than Dazzler’s missing mum. After she had left Carter Blaire, she had become entangled with another man and became pregnant again. When this Nick Brown started to drink and take drugs, she left him and started her life over from scratch, choosing a new identity and pursuing a music career - though not on stage but as a teacher. Vanessa explained that Dazzler’s mother was too afraid to see her in person, but she convinced her to attend the concert. Alison knew that she had no other chance to reach out to her than by getting on the stage and perform. She dedicated her last song, called “A Little Girl’s Dream,“ to her and, after the event, Barbara met with Carter and Ali and they sorted out their differences. [Dazzler #21]

With her big-time debut a major success, Ali soon had her first recording session. She spent long, straining hours in the studio and, in the end, was quite proud of what she and her band had accomplished. However, she wondered why her boyfriend, Ken, had not come to the studio like he promised. Later that night, they had an argument about it, Alison thinking that Ken didn’t support her enough, only thinking of his own career as a lawyer instead.

Needing somebody with whom to talk, Alison contacted Warren, whom she considered a good friend and he took her for a flight. Wanting revenge on the X-Men for having spoiled their plan to assassinate Senator Kelly, Mystique and her partners assaulted them, as the Angel was the only X-Man whose identity was publicly known. During the fight, Rogue was supposed to absorb the knowledge of the X-Men’s whereabouts from Worthington’s mind but Rogue freaked out. She did not want to use her powers on him, as the wings were a physical mutation and Rogue feared what effect that would have on her. 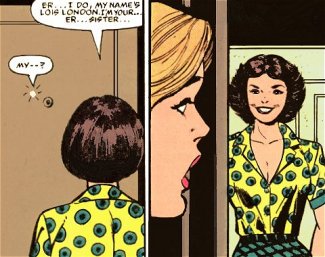 While distracted with their own problems, Dazzler took Rogue and Mystique by surprise with her light powers. Rogue then developed a grudge against Dazzler, the woman who had everything that she wanted. Having been a fan of her music before, she now saw that Alison Blaire had also a controllable mutant power and a beautiful boyfriend. She fought Dazzler various times, even endangering Dazzler’s half-sister, Lois London, who was visiting from college. [Dazzler #22-24] 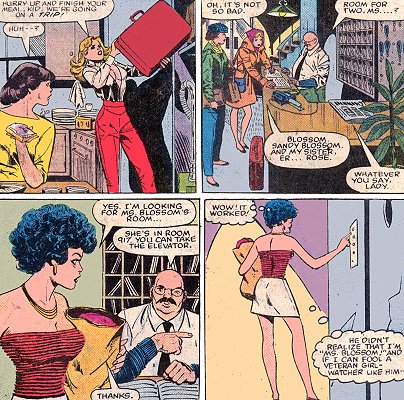 Over the next weeks, Lois‘ had various headaches and even fainted a few times. Finally, as she took a walk to get some air while Alison performed in a club, Lois was attacked by a would-be mugger. She panicked, her hand started to glow and the mugger died. Lois went to Dazzler for help and Ali, with memories of her own murder trial still fresh, didn't think Lois would be treated fairly. The sisters decided to hit the road and travel to California. As people kept recognizing Ali, she disguised herself with a black wig. However, they were still followed, as somebody blackmailed them with photos of Lois and the mugger. 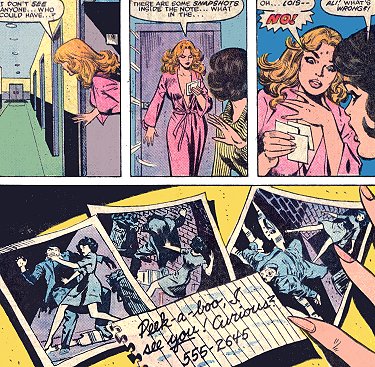 When Ali called the phone number attached to the pictures, she was told that they had to break into a certain house and kill the man sleeping inside. Dazzler pretended to go through with the crime, but secretly she called Warren Worthington for back-up. At night, they broke into the house and, after a short fight, it turned out that the owner was Nick Brown, Lois‘ father. After becoming a successful agent and financier, he had been paying his butler to track down Lois. The butler witnessed the death of the mugger and it was he who blackmailed the sisters into trying to kill his master, as he wanted to steal Brown’s fortune. Thanks to Angel's timely arrival, the crime was prevented and, with the pictures, Lois was easily cleared of all charges. They showed that she was actually defending herself and, fortunately, the crackling aura of energy was not even seen on the photos. [Dazzler #26-28]

During the time of their escape, Alison’s record had become a hit and was played on the radio. Nick decided to help her with his media connections and, soon, she was doing publicity stills all over Los Angeles. He even introduced Dazzler to Roman Nekobah, a famous but aging singer and actor. Nekobah’s last record was a flop and the plan was to boost Alison’s career with his name, while he would profit from being seen with a beautiful new talent. Roman took Ali for a flight in his private jet, but they were attacked and only barely survived thanks to Dazzler’s light powers. 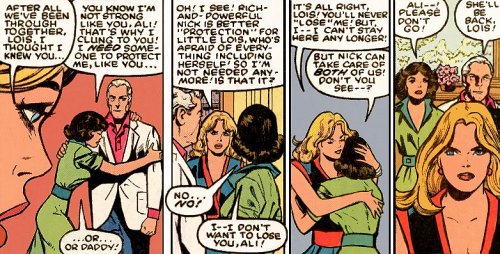 When Alison returned home from the hospital, Nick blamed her for not taking advantage of the free publicity. He would have exploited the incident with headlines about the promising singer being in critical condition. Alison and Nick argued and, finally, when he admitted that, if he had had the idea, he would have sent the killer after them himself, just to create a good media scenario, she decided to leave the Brown estate. Alison thought that Lois would leave as well, but she couldn’t. She felt that she needed somebody to protect her and Nick seemed the best choice. [Dazzler #29-30]