Wade found a new home renting out an abandoned warehouse in Red Hook, Brooklyn. He was approached by a cop named Fred Pierson who wanted Deadpool to eliminate six crime bosses before Pierson had to testify against them, putting his family at risk. Deadpool took the job with a $50,000 down payment and met with Pierson's contact, a tattoo artist named Anna working for the mob who pointed Wade at the targets. Wade and Anna became involved, but the whole job turned out to be a scam. Anna had seduced Pierson into arranging for the hits on her mob boyfriends so they could kill his wife and collect one million in life insurance money to run off together. When Pierson tried to keep some of the money for himself, Anna turned on him. Anna tried to convince Deadpool she really loved him but, after she murdered Fred and lied to him multiple times, Wade couldn't trust her, and shot her. [Deadpool (2nd series) #46-48]

Wilson was feeling down about his love life and job prospects after that, but soon had a surprising run of good luck. He helped an old lady named Patricia Muggins to the hospital and they inspired each other with their stories of battling cancer. In short order, Wade also scored with a nurse named Veronica, a club girl named Debbie, an out-of-towner new neighbor named Marguerite and even a random delivery girl named Amy. Wade was feeling pretty good about himself after all this. In fact, however, all five women were Vanessa, trying to reestablish herself in Wade's life. [Deadpool (2nd series) #49]

Over the next weeks, Deadpool had an eventful time taking jobs in New York. He failed to shoot 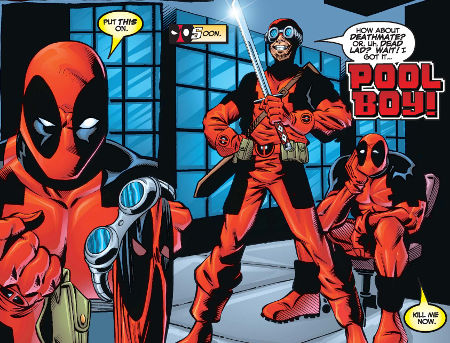 Maxy Millions before the mobster killed his client, John Cassera. Deadpool was forced to take in Christopher Cassera, John's teenaged son, as they tried to complete the contract on Millions. Chris began calling himself Kid Deadpool, or Pool Boy, before leaving to find his own way. Wade also got caught between the Punisher and the Gnucci crime family, as well as stopping the serial killing Switchblade Sisters. [Deadpool (2nd series) #50-55] 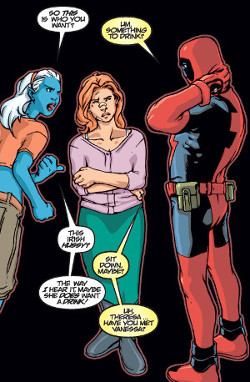 Deadpool eventually let Vanessa know he was in on her various disguises, and the two of them tried to restore their relationship. There was a deep lack of trust between them, however, only exacerbated by Vanessa's increasingly erratic behavior. When Theresa called and asked Wade to meet her for a date, Vanessa erased the message and went instead. She brutally beat Siryn while disguised as Deadpool, leading Theresa to blame Wade for her injuries. Vanessa left Wade as well, convinced he was in love with Theresa and would never be loyal to her. Deadpool's Red Hook warehouse was then blown up, once again leaving him without a home, a job or support. [Deadpool (2nd series) #56]

A new Weapon X Program had emerged in Deadpool's absence, and their Director was interested in reacquiring his services. Sabretooth interrupted Wilson on one of his jobs and "made him an offer he couldn't refuse." Deadpool met with the Director, ready to tell him where he could shove his offer, when they revealed that 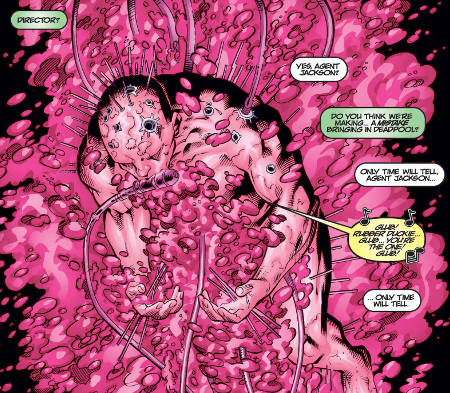 Weapon X scientists had the means of improving his abilities. A single injection supercharged Wade's healing factor for an hour, giving him unprecedented regenerative powers and even eliminating his scar tissue. After an hour out in public without a mask to consider his options, Deadpool decided the perks of the job were too tempting to pass up. He agreed to sign up and took the full treatment to juice up his healing factor and restore his face. [Deadpool (2nd series) #57] 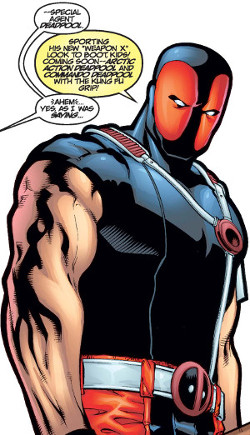 Wade soon recognized how despicable the Director and his program were, however. Sabretooth was bad enough, but Garrison Kane had also joined the program and tossed away any soul or heroism he possessed before. After a mission to contain a hostile mutant led to Kane mercilessly shooting the pubescent kid in the head, Wade tried to quit. Well, he tried to kill the Director and THEN quit, only to find out a behavioral implant prevented him from doing either. As punishment for his insubordination, the Director sent him out to kill another renegade agent from the program... Vanessa. Turns out her return into Wade's life had been part of an earlier recruitment effort that went bad after she became increasingly unstable. [Deadpool (2nd series) #58] Naturally, Deadpool planned to ignore his orders and spirit Copycat to safety, but the Director sent Kane to finish the job. Deadpool beat Kane, but the distraction allowed Sabretooth to track Vanessa and murder her while Wade was otherwise occupied. Creed painted the walls with Vanessa’s blood as a calling card for Deadpool to find. [Deadpool (2nd series) #59]

Unwilling to let this stand, Wade prepared for a final strike on the Weapon X Program. He cut out the inhibitor chip which prevented him from attacking Weapon X superiors and said good-bye to his beautiful mug. Deadpool disabled a large number of Weapon X's special agents and troops in the field before teleporting his way into the main facility. He confronted Sabretooth, but their fight 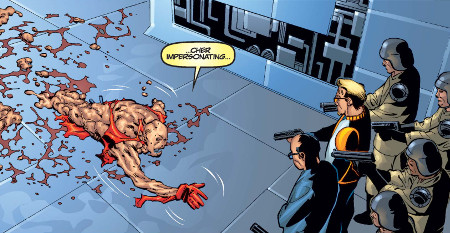 was interrupted by a catalytic gas agent from the vents that neutralized his enhanced healing factor, effectively causing Wilson to liquefy. Sabretooth had no problem with the pudding-ized Deadpool, and a final barrage of gunfire scattered and dispersed Wade's body. All that was left of Deadpool to bury was a single hand, defiantly giving the finger to the Director as his final act. [Deadpool (2nd series) #60]

A funeral ceremony was held by those who cared for Wade Wilson (or who wanted to make sure he was really dead). Before Deadpool's spirit could fully depart his body and enter the afterlife, however, T-Ray returned. Using the power of the Gemini Star, T-Ray resurrected Deadpool. His

body fully regenerated out of the remaining hand, but his mind was incomplete. T-Ray had used the Star to make aspects of Wade Wilson's personality manifest independently, creating new Deadpools reflecting the hero, the killer, the comedian and the lunatic inside Wade.

Deadpool was initially left homeless and amnesiac on the streets until Weasel happened to find him. Putting aside their differences, he helped Wade regain his memories before setting off to confront his doppelgangers. T-Ray revealed his part in the chaos, creating even more Deadpool spin-offs to flood the market. Eventually, the power of the Gemini Star was disrupted, causing T-Ray to absorb the disparate aspects of Deadpool's personality into himself. Unknown to Deadpool, T-Ray's power had come from Thanos, who hated Deadpool for receiving the love of Mistress Death, and cursed him with immortal life to forever keep them apart. [Deadpool (2nd series) #61-64]

Returning to work as a mercenary, Deadpool took on a major hit targeting one of the Four Winds, a quartet of major underworld crime bosses. Staking out one of their meetings, Wilson crashed 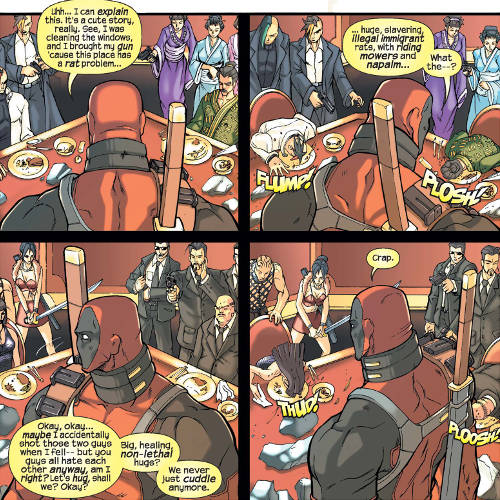 through the skylight and, miraculously, apparently shot all four bosses through the heart while tumbling through the air onto their table. The style and caliber of the hit turned Deadpool into a celebrity, instantly making him the most famous mercenary in the world. He began courting a higher class of clientele and even afforded his own office and his own executive assistant, Sandi Brandenberg, under the stylings of DP, Inc. Unfortunately, Deadpool's fame also brought new enemies. A fellow mercenary named Black Swan began working with Nijo, brother of one of the murdered Four Winds, to bring Wilson down. [Deadpool (2nd series) #65]

The Swan used his mutant abilities to infect Deadpool with a psychic virus that began debilitating him, causing headaches, aphasia and completely wrecking his aim. Deadpool continued to work

in spite of his impairments, as his unique brain chemistry fought off the Black Swan's virus more than a normal person's would. He became involved in a marital squabble between a billionaire and his trophy wife over using powdered rhino horn as an aphrodesiac... specifically the horn of THE Rhino, a Hulk-class super-villain. Wade survived the encounter by turning some shrinking gas on Rhino, making him into an adorable sidekick and keychain. [Deadpool (2nd series) #66]

Wade continued with his work, acting as a bodyguard to Dazzler when she returned to her disco tour and getting hired to end a feud between two bickering businessmen. The brain damage caused by the virus was only getting worse, however. Taskmaster turned up information about the Black Swan, alerting Deadpool to who his opponent was and what he could do. [Deadpool (2nd series) #67-68]

Deadpool parachuted in to confront Black Swan and Nijo at his castle in Germany. The Swan revealed he was the one who actually made the Four Winds shots, and his fury came from Deadpool taking the credit. Black Swan stabbed Nijo through the chest as he revealed he was the one truly responsible for the death of Nijo's brother, then turned his attentions on Deadpool. However, Wade had come with a suitcase bomb clasped to his wrist, putting the Swan in danger 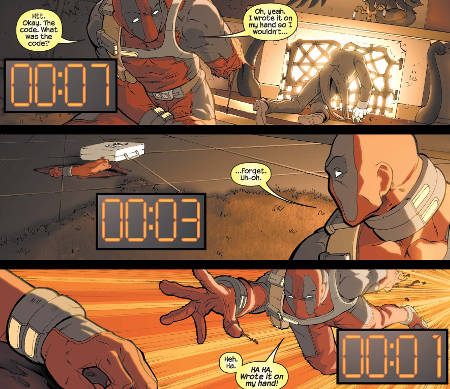 of going out with his target. During their fight, the Black Swan severed Deadpool's arm but was unable to extract the deactivation code from his mind, despite forging a psychic link. Wilson used his own madness as a weapon, deliberately letting the Swan deeper into his mind to overwhelm him with Deadpool's insanity. With the Swan down, Deadpool prepared to deactivate the bomb using the code he wrote down on his hand without memorizing. The severed hand... which was on the other side of the room. [Deadpool (2nd series) #69]

Deadpool and the Black Swan were believed dead for months after the explosion consumed the Swan's castle in Germany. Sandi moved on by finding a mysterious amnesiac man with a healing factor who answered to the name Alex Hayden. Thinking he might be Deadpool underneath the new scars, Sandi and Taskmaster helped turn him into a mercenary named Agent X. [Agent X #1]

In fact, the truth was sooo much more complicated. The psychic link between Deadpool and Black Swan at the moment of their deaths pushed Swan's powers to unexpected heights. Deadpool's 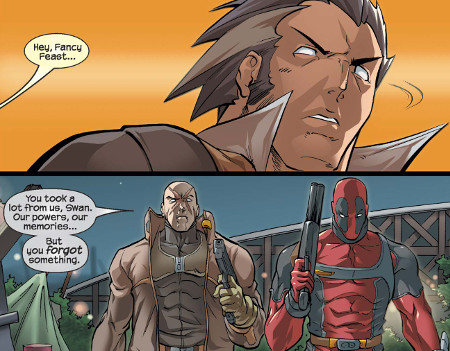 healing factor contained a mental aspect that turned out to be transferable by Swan's powers. The two men and the dead body of Nijo exchanged and congregated traits through the psychic link. "Alex Hayden" was the body of Nijo reanimated by Deadpool's healing factor, deriving personality traits from the three men. Deadpool survived but as a mental invalid, while the Black Swan found himself benefiting from Wilson's healing factor but tormented by Nijo's strict sense of honor and detestable love of Radiohead.

With Deadpool by his side, the Black Swan reconnected with Agent X, in the hopes of using his abilities to put everything of the three men back where it belonged. Hayden and his friends Taskmaster, Outlaw and Sandi agreed to the procedure as Swan gave his word no one would be harmed. Of course, once the swap was completed, the Black Swan no longer had a sense of

honor that compelled him to keep his word. He turned on the other participants using his now augmented mental powers. Deadpool was still restored by the process, though, and he teamed up with Agent X and the others to lay the smackdown on Black Swan. Deadpool was offered a job with Agency X, but Wade decided to go his own way instead, although he remained on good terms with Hayden and the others. [Agent X #13-15]