In the Age of Apocalypse, Paige was a member of Generation Next. Originally Husk was found by Sinister along with her sister, Elizabeth, and brother, Sam. However, unlike them, Paige chose to rebel 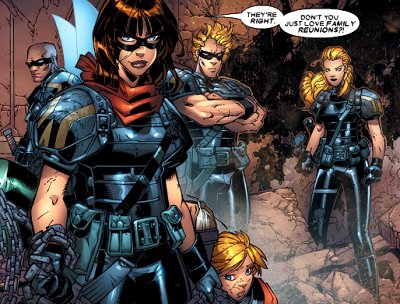 against Apocalypse and joined Magneto’s cause. This version of Paige was a lot more aggressive and violent than her counterpart of the main universe. She also had greater control over her abilities, as she was able to transform only parts of her body, and even capable of adopting liquid and gaseous states. When all of Generation X were sent on a mission to retrieve Colossus’s sister, Illyana, from a prison plant, she ended up captured and was left for dead by Colossus. However, she was later saved by her brothers and sister, who convinced Paige to switch sides. Disguising herself as Xorn, she infiltrated the X-Men and waited for the perfect opportunity to strike. When she finally revealed herself and the Guthrie siblings fought the X-Men, they all ended up dead. 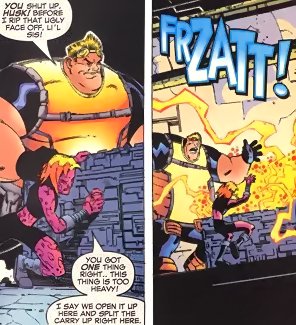 The Mutant X universe version of Paige was also on the wrong side of the law. This Husk was a member of Jubilee’s Marauders, and constantly bickering with her older brother and teammate, Cannonball. The extent of her powers is unknown, though Husk was apparently stuck in some hideous form, unable to revert back. After failing a mission for their mysterious employer, the Marauders tried to escape into the Morlock tunnels. Their final fate was left unrevealed. 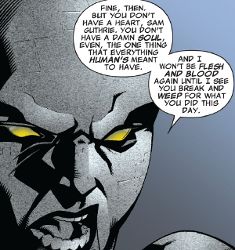 During Legion’s warped reality the Age of X, Husk had been known as a terrorist. When mutants and mutant gene carriers were rounded up and sent to internment camps during Operation Clean Sweep, their families and mutants supporters were also sent to camps or mass murdered. Husk escaped capture with a price on her head, and when she was found, she killed all the men who encountered her. In tow of the State of Kentucky Department of Corrections transport trucks, Paige found the bodies of their family in a dump truck. This trauma caused her vow vengeance upon the humans and created a rift between her and Sam, who vowed to protect and lead the remaining mutants and gene carriers to safety instead of properly mourn his family. A husked Paige promised to never return to her normal skin until he shed a tear for their family. Together, they formed X-Force, a mutant combat cell, in which Sam was the face and leader of the group and Paige the brains and gall behind it. Henry Gyrich suspected Paige to have killed Copycat, an Anti-Mutant Task Force spy. Eventually, Paige and Sam joined up with Magneto and made their way to Fortress X. Paige and Sam apparently made amends, as she is shown in flesh, fighting side by side with her brother.

In the Ultimate Universe, An escapee from the internment camp, Husk is found by Kitty, Rogue, Jimmy, and Bobby. She is Kitty’s key in freeing the mutants from the camps and gathering an army of the mutants in nearby former military bunkers, telling her the layouts and guard locations. Husk was an obvious asset to Kitty’s army, as some of her forms are invisible to technological trackers. Husk told Kitty that they need to worry more about William Stryker being dangerous than the guards at the camps, despite Kitty’s protest that she killed Stryker. Husk was pivotal in freeing the interned mutants, having the knowledge of entering the facilities and inspiring the interned mutants to revolt.

While in line for the mutant cure, Bobby and Paige discussed taking the cure. Paige insisted that she’ll take it because she was tired of her disgusting power. But Bobby liked who she was and would ask her out anyway. Paige sends Bobby away to get her a bottle of water and says to herself that he deserves better. She proceeds to set off a bomb taped to her torso, killing five and wounding seventeen. Kitty learns that Husk had been Stryker’s plant all along, undermining the mutant message of peace by provoking violence. Having survived the blast, Husk screamed as she was arrested that Stryker was right and that mutants must be exterminated. However, the doctors who examined her concluded that she had been brainwashed. While Bobby was depressed over Paige’s mindwarped traitorous ways, Kitty took to never feeling sorry for her again.

Later, Husk appears from the desert, dehydrated and weak, much to the wariness of the X-Men. She informs Kitty that more mutants are on their way to Utopia. Bobby couldn’t wait to see Paige. He was her only comfort in a place where no one trusted her. This led Paige to follow Nomi in a split of mutant ideologies between her and Kitty, and she persuaded Bobby to follow. Nomi’s X-Men combined forces with Kitty’s X-Men to fend off their biggest threat yet: Jean Grey. Husk questioned Kitty’s decision during this time to make Colossus leader of Utopia, as he was a known murderer and his boyfriend was a human. What has happened to Husk since the fall of Jean Grey and Galactus after is unknown.