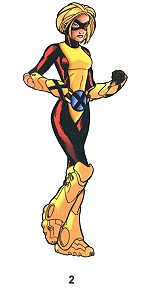 1) Paige’s first costume was the standard Generation X uniform: a red bodysuit with yellow elbow pads, gloves, boots, and belt with a blue X on it. [Generation X #1]

2) When the Massachusetts Academy was reopened to the public and a large number of human students enrolled, Generation X adopted new costumes to keep their identities secret. Besides the addition of facemasks, these costumes had a more equal red-and-yellow color scheme. [Generation X #51]

3) Following the school’s secret of harboring mutants being outed, Generation X redesigned their costumes again. Paige’s new costume consisted of tight red cargo pants, a red tube top with a stylized red and yellow X on the chest, and separate red shoulders and sleeves with large red and yellow X’s on the shoulders. [Generation X #63]

-) A short time later, the team members received customized reddish-brown uniforms made of a smart material. However, the team disbanded before Paige had a chance to wear her new uniform. [Generation X #71] 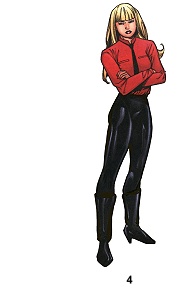 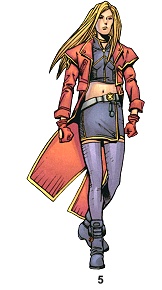 4) While working with Banshee’s X-Corps, Husk had two different uniforms to chose from. Just like her old teammate, Jubilee, she chose the more business-like outfit: a black suit with a red shirt and black tie, with red trim in different areas. [Uncanny X-Men (1st series) #403]

5) After Paige joined the X-Men she started wearing an all new costume. It consisted of a gray top and mini skirt with an exposed midriff, boots in the same color and lavender stockings. On top of it, Paige wears a red leather coat, with X-symbols on the shoulders and gray stripes running down each arm. Nearly all parts of the ensemble feature yellow trim. A gray belt, red gloves and a yellow choker complete the uniform. [Uncanny X-Men (1st series) #417] Not surprisingly, the color scheme of this outfit was a perfect match for the uniform of her lover, Archangel.

-) On Utopia, Husk was mainly seen wearing a red and gold version of the standard blue and gold X-Men uniform. [X-Men Legacy (1st series) #231] However, on occasion, she reverted back to her mini-skirt costume with the red trench coat. [New Mutants (3rd series) #25]

7) At the Jean Grey School for Higher Learning, Husk took to wearing a new yellow costume that consists of a yellow tank top with white straps over the shoulders and on the edge of the sleeves, matching yellow gloves, hot pants with a white belt that has several pouches attached to it. She also wore thigh-high yellow boots with white on the feet and on the knee. She sometimes wears yellow goggles, and often has a large hood with which she covers her face.