Paige is the second of ten children born to Thomas Zebulon and Lucinda Guthrie in Cumberland, Kentucky. By the time she had turned thirteen, Paige had learned that not only was her older brother Sam a mutant but that he was also the a 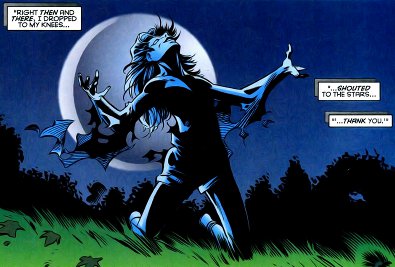 member of the New Mutants, Cannonball. Being the oldest child after Sam, Paige assumed that she was next in line to develop a mutant power. Despite her mother explaining to Paige that there are some things a body can’t rush (or possibly because of it), she tested herself for a range of mutant powers. Finally, in a fit of frustration, Paige turned towards the sky and yelled “If’n ya is gonna make me inta a mutant do it soon, or ah swear ah’m gonna tear right outta muh own skin!” As she stood shivering in the cold night, Paige did tear right out of her skin. Even though Paige did not fully understand her mutant abilities she immediately fell to her knees in joy and thanked the stars. [Generation X #24]

Paige would spend many long months trying to understand her mutant powers while envying her brother’s life at Xavier’s. On one visit to Kentucky, Sam brought his teammate and girlfriend, Tabitha, home with him. Paige was secretly spying on them when they were attacked by the Upstart Sienna Blaze during the so-called “Younghunt,” where the members of the Upstarts attempted to capture the former members of the New Mutants and the Hellions that were still alive. 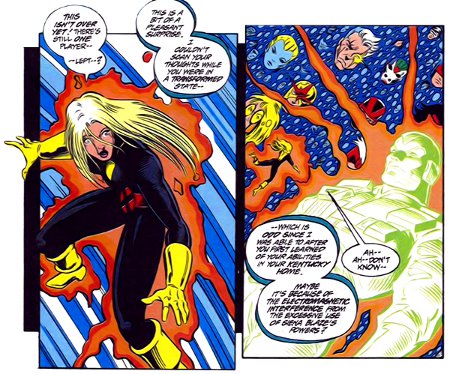 Paige attempted to use her powers to save them but, as she later confessed to Cable as she recounted her story, she was too scared to husk into a useful form. When X-Force went after their missing teammates and friends, Paige volunteered to go along with them, but Cable forbade it since Paige was too much of a novice. Despite his warnings, Paige followed X-Force through Cable’s portal. She was able to morph into a form that allowed her to remain hidden from the Gamesmaster until both X-Force and the New Warriors were beaten by the Upstarts. Fearing for her brother’s life, Paige confronted the Gamesmaster. Paige was able to defeat the Upstarts by convincing the Gamesmaster that, instead of destroying the next generation of mutants, he should attempt to train them. [X-Force (1st series) #32-33, New Warriors (1st series) #46]

Following the battle, Paige briefly stayed with X-Force in Shinobi Shaw’s Swiss Chalet before they returned her to Kentucky. Despite being exposed to the realities and dangers of the super hero lifestyle, Paige made it clear that she wanted to be trained in the use of her powers. 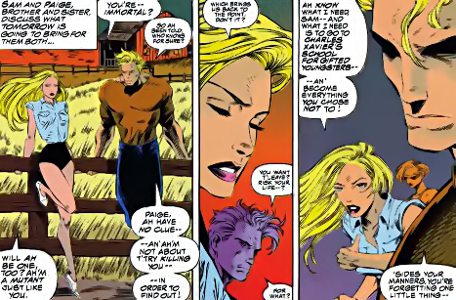 When Cable began to explain that he didn’t have the resources to train her, Paige told Cable that she wasn’t interested in his teachings, but that she wanted to be trained by Charles Xavier. Sam and Tabitha brought Paige back home, where she got to learn more about Sam’s life, including the fact that he was, or at least it was believed at that time, an immortal. Sam had hoped to dissuade his sister from following in his footsteps, but Paige explained to him that she thought leaving Xavier’s was the dumbest thing he ever did and that she was going to become the X-Man Sam could have been, even though Xavier wasn’t exactly training new mutants anymore. [X-Force (1st series) #34-35]

A short time later, Paige was attacked and kidnapped by the techno-organic creatures called the Phalanx. Along with several other young mutants, she was being analyzed by the Phalanx for a way to assimilate mutants as easily as they could assimilate humans. From the moment she was captured, Paige was confident that the X-Men would come to rescue her and the others.

She even remained optimistic when parts of her skin turned techno-organic, a clear indication of her being infected with the transmode virus. Fortunately, Banshee and the White Queen went after the captured teenagers together with mansion “guest,“ Sabretooth, and Jubilee. Paige was saved from the infection by Sabretooth, who shredded her outer layer of infected skin, activating her powers and creating a new, uninfected skin. The Phalanx still endangering the entire group, another of the captured mutants, Clarice “Blink” Ferguson, sacrificed herself to save her new friends, even though Paige begged her not to. [X-Men (2nd series) #36-37, Uncanny X-Men (1st series) #317]

Following the incident with the Phalanx, Xavier decided to open a new class for mutants in training, though not at his mansion. While the mansion in Westchester was renamed to the “Xavier Institute for Higher Learning“, the new “Xavier’s School for Gifted Youngsters“ was opened up at the old 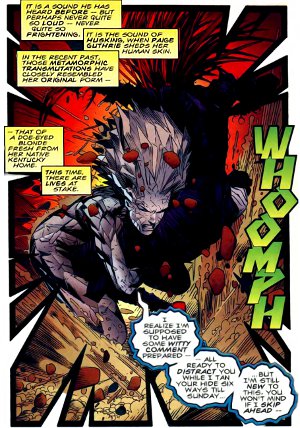 From her first day at Xavier’s, Husk, as Paige was now calling herself, aspired to lead Generation X. She worked hard to be the best she could be - physically, academically, and even socially by working to get rid of her Kentucky accent. However, she was a bit overeager in her attempts to prove herself capable. While searching for the mysterious Penance, Paige took on the dangerous mutant one-on-one. Underestimating the sharpness of Penance’s razor-sharp skin, Page was easily beaten and left her with some bad gashes in her arm, which required medical attention after Paige changed back to her normal form. [Generation X #1-3]

Paige’s once idealist vision of the life of the mutant hero was once more shattered when she learned of the Legacy Virus. 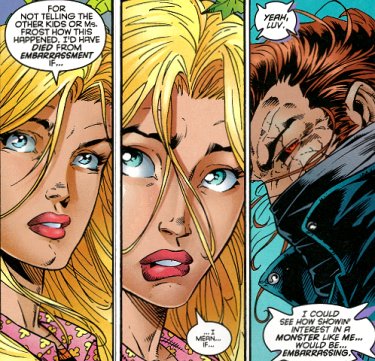 Coping with this news, Paige got drunk while most of Generation X was in New York. She was found by Chamber who helped to sober her up. Paige, who had developed an attraction to Jonothon, and either out of drunkenness or despair, attempted to kiss him. Jono was startled and lost control of his powers, destroying the girls’ dormitory. Luckily neither of them were hurt. Jonothon chose not to tell the others about Paige’s involvement in the incident. Paige was grateful to be spared the embarrassment of being a part of the dormitory explosion, but Jono misunderstood her, thinking she was embarrassed that the others would find out about her feelings for a “monster” like him. [Generation X #4-7] 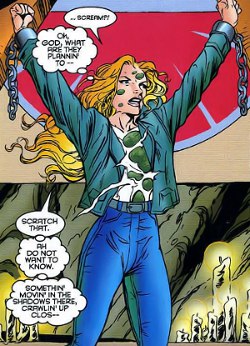 When Paige’s younger sister, Joelle, got involved with Humanity’s Last Stand, Sam brought Paige along with him and some of the X-Men to investigate, much to the surprise of Mrs. Guthrie, who hadn’t expected to see Paige home so soon. While infiltrating the organization, Paige was attacked and taken hostage. She attempted to pretend that she wasn’t scared when Sam and the X-Men eventually rescued her but, based on the sudden reemergence of Paige’s accent, Sam knew better. When Joelle saw what Humanity’s Last Stand was really about, she came back to her senses and left the organization. [Uncanny X-Men Annual ‘95]