Inhabiting Polaris' body, Malice battled Havok and the X-Men several times and not even Psylocke’s telepathy could overcome the mental hold over Lorna. Malice toyed around with the X-Men, knowing that they would not dare to harm Lorna’s body, but she herself had no such restrictions and used her magnetic powers without hesitation. [Uncanny X-Men (1st series) #221-222]

Weeks later, Malice stormed into Sinister’s room, as she had discovered that she was somehow permanently bonded to Lorna’s body. Much to her surprise, 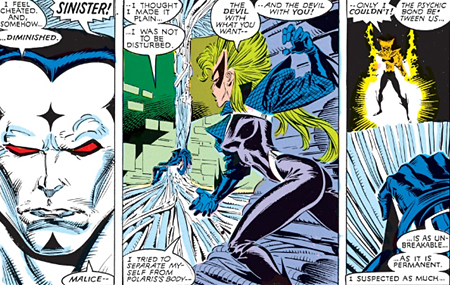 Sinister had predicted this effect, as their individual energy matrixes were of such frequencies that they would interact with each other. Malice was quite angry, as she was now stuck and could no longer possess other people. However, she calmed a bit down when Mr. Sinister explained that she was priceless to him. She was now unique and, unlike the rest of the Marauders, not cloneable. Yet, at the same time, Sinister warned Malice to never speak to him in such tone again. [Uncanny X-Men (1st series) #239]

After Mister Sinister was seemingly killed during the crisis known as Inferno, Malice’s hold over Polaris weakened. The two psyches struggled for dominance and, briefly gaining the upper hand, Lorna was able to contact the X-Men for help. However, in their Australian base, there was nobody present to pick up the call, besides Jubilee, who lived there secretly.

She answered the phone and left Havok a note, which was only discovered somewhat later. When the X-Men finally arrived in South America, to where Malice had fled, it was too late, as Lorna had already been captured by the Savage Land Mutates who had been chasing her. [Uncanny X-Men (1st series) #249]

Zaladane, the leader of the Mutates, claimed to be Lorna’s sister and had something rather special in mind for her. Once they returned to their base within the Savage Land, Lorna was placed on a machine that could transfer powers. The device was one of the things the High Evolutionary had left behind and it was operated by Brainchild of the 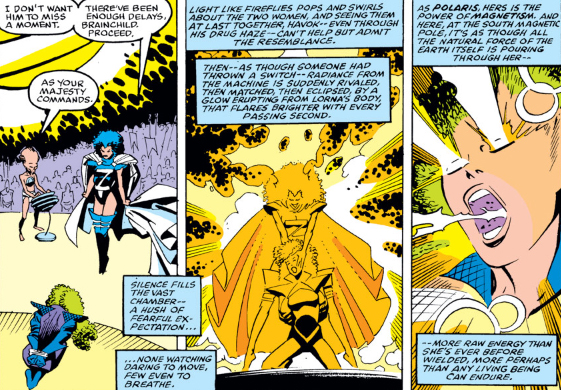 Savage Land Mutates. Although Havok had followed in the guise of one of Zaladane’s troops, he could not prevent Zaladane from using a device and transferring the magnetic powers from Lorna to herself. As an unexpected side-effect, the psychic entity Malice was finally purged of Polaris‘ body.

Lorna and Alex were put into a prison cell within Zaladane’s citadel. There, the Savage Land Mutates started to act wilder than usual and, strangely, 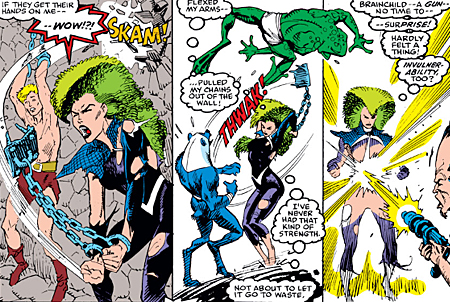 Lorna grew a few inches and developed super-strength and nigh-invulnerability. With ease, she broke the chains that were holding her and she helped the invading X-Men against Zaladane’s troops. To everyone’s surprise, Lorna’s strength levels seemed to be on par with those of Colossus. Still, in all the confusion, Zaladane escaped. As the fighting was over, the X-Men found themselves teleported back to Australia by their strange ally Gateway, leaving Lorna behind. [Uncanny X-Men (1st series) #250] 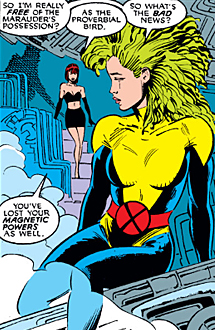 No longer capable of flight, Lorna had to return the civilization the old-fashioned way. She found a freighter leaving Antarctica and was allowed to come aboard. However, during the journey, everyone aboard the ship started to act weird and crazy. Finally, the sailors started fighting each other and Lorna was even shot at. Once again, she grew in size and the bullets bounced off her skin, the negative emotional energies around her apparently fueling her powers. Lorna made her way to the bridge and, having nowhere else to turn, radioed to Muir Island for help. Eventually, she managed to convince Banshee of no longer being under the spell of Malice and he picked her up somewhere in the Atlantic, while the sailors aboard had caused the ship‘s destruction. On Muir Island, Lorna was examined by Moira MacTaggert, whose tests confirmed not only that Malice was no longer in her head, but also that her magnetic powers were now dormant and could not be accessed. Moira theorized that Lorna’s offspring could inherit and manifest that potential though. [Uncanny X-Men (1st series) #253-254]

While Lorna was still trying to get to terms with her new set of powers, Muir Island was attack by the Reavers. Naturally, she helped to fight the invading cyborgs off, and reveled in her new abilities. She no longer felt like a pushover who had to fight opponents from afar, 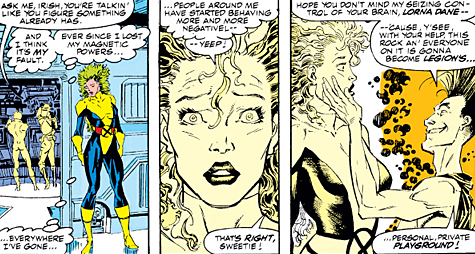 but could clash things out up front and personal - with her bare hands. Unfortunately, a few days after the Reavers had been fought off, the people on Muir Island started to act suspiciously too and Lorna realized that she was not only drawing her strength from other people’s anger and rage, but that she was somehow inducing this behavior. She was now a nexus for negative emotional energies. Before she could alarm anybody to her discovery, though, Polaris was captured by Legion and placed in a secure holding cell of the complex. [Uncanny X-Men (1st series) #257-258] 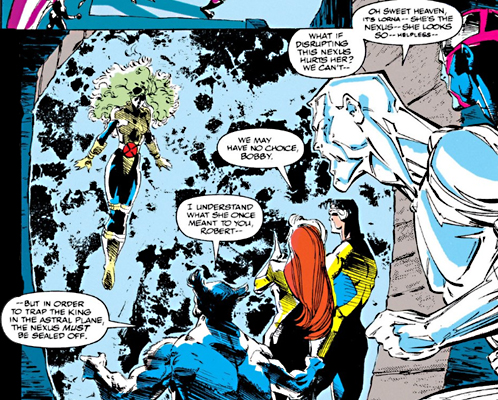 However, as it turned out, it was not actually the mentally imbalanced boy who was responsible for her imprisonment, but the Shadow King, who had been manipulating him. As he no longer possessed a physical body, the old archenemy of Professor Xavier wanted to explore Lorna’s new status as a gateway between the mortal realm and the astral plane. [Uncanny X-Men (1st series) #269] Sending waves extreme hatred all around the world, the Shadow King fueled his own power to near unlimited level with the trapped Polaris absorbing the negative emotional energy for him. It took the combined might of the X-Men and X-Factor to battle the Shadow King from two sides, one half fighting him on the astral plane whereas the others kept his physical host, Legion, busy.

In the end, Forge pushed Psylocke’s psychic blade into Polaris’ head, disrupting the nexus and the Shadow King’s power source. Though Legion was rendered comatose and Xavier severely injured,