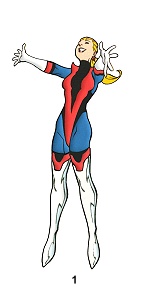 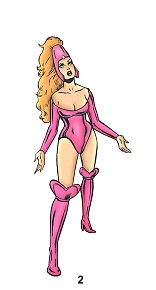 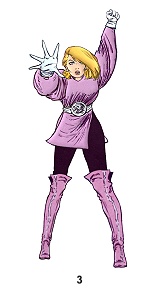 1) While working as trapeze artists, Kurt and Jimaine wore similar outfits. Nightcrawler later wore this as his first costume as an X-Man. [Excalibur (1st series) #minus 1]

2) When Amanda revealed herself to be Jimaine, she was wearing this pink outfit, including a strange headpiece of unknown significance. [Uncanny X-Men Annual (1st series) #4] 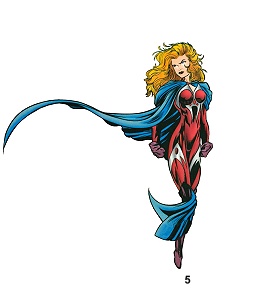 4) As part of the makeshift team defending Muir Island from the attacking Reavers, Amanda was given the basic X-uniform to wear, much to her disgust. [Uncanny X-Men (1st series) #254]

5) Upon joining Excalibur, Daytripper presented this new costume, along with her new codename. [Excalibur (1st series) #75]

6) Shortly afterwards she changed the costume’s coloring, but the basic design remained the same. Sometimes though, she wore a short jacket instead of the long dark cape. [Excalibur (1st series) #84] 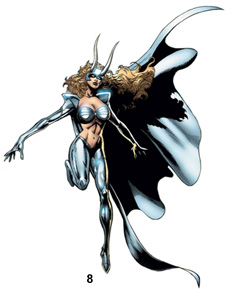 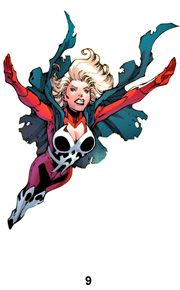 7) As ruler of Limbo, Amanda took on Illyana Rasputin's moniker Magik and presents herself in a similar looking shiny armor with horn accessories. [X-Men: Black Sun #1]

8) Amanda soon replaced the white and gold armor with a silver two-piece armor that left her stomach bare. The armor originally had large knee-pads but these were later streamlined. This outfit originally retained the horns and cloak of the previous costume, although later versions had the cloak replaced by a cape and large shoulder pads. [X-Men: Magik #1]

9) No longer ruling Limbo, Amanda has been wearing a modified version of her original Excalibur costume. This version has dark blue panels on her inner thighs, and a larger silver design across her chest. [Nightcrawler (4th series) #1]