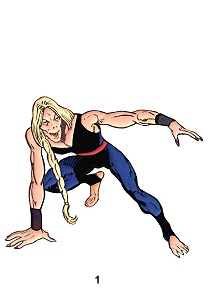 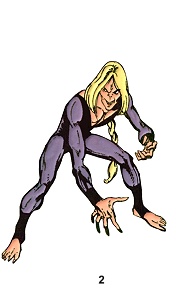 1) Upon joining the Flight program of Department H, Kyle received a modified version of the team’s blue and red training uniforms. Wild Child’s suit had no sleeves, gloves or boots, to allow for more freedom of movement and to let him use his claws. [Alpha Flight (1st series) #1]

2) Already early in training, Kyle was given his own costume, a purple and black suit, again with no gloves or boots. This is the costume Wild Child has been wearing for the longest time, while he was a training member of Gamma Flight, recruited for the villainous Omega Flight, or the re-organized new official Gamma Flight. [Alpha Flight (1st series) #11] 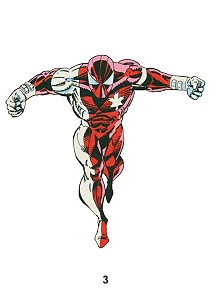 3) Pardoned of his crimes and apparently cured of his bestial nature, Kyle joined Alpha Flight under the identity of Weapon Omega and received the default uniform of the group. He wore the face mask to hide his true identity from the media. The Spider-Man style full face mask was later modified into a half-mask with tassles, closer to Iron Fist. [Alpha Flight (1st series) #104]

4) Coming to terms with his mysterious past, Kyle called himself Wildheart and also adopted a new look. While the design was still that of Alpha Flight’s team look, the color scheme gray and red was that of the training team Beta Flight. Apparently, this was his way to express that, while the government considered him cured, he knew he had still a lot to learn. [Alpha Flight (1st series) #118-119] 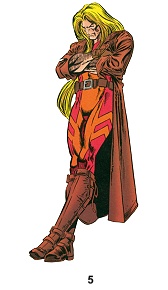 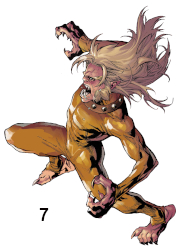 5) When Kyle decided to fully join X-Factor, already reverted back to his ugly looks, he adopted a new costume as he no longer could wear the one of Canada’s official hero group. Kyle came up with an orange and brown, sleeveless suit. In public, he often wore a hat and trench coat over it to hide his ugly features. [X-Factor (1st series) #114]

6) While the similarities of their looks was a coincidence when they were members of X-Factor, Wild Child and Sabretooth were apparently given the same costume on purpose by Weapon X. Both are wearing blue bodysuits, with metallic, tooth-shaped shoulder pads. [Weapon X: The Draft - Wild Child]

-) In the service of Romulus, Wild Child is wearing an full body suit made of black leather with several straps, spikes and zippers on it. If they do serve another purpose than being purely ornamental, it has yet to be revealed. Somewhat matching the applications of his costume, Kyle is now also sporting numerous facial piercings. [Wolverine (3rd series) #53]

7) Following his resurrection, Wild Child wore a dark yellow or light brown spandex one-piece that covered his entire body except his feet and hands which remained bare. Around his neck, he wore a large, brown collar with several spiked studs and with a chain occasionally attached to the collar. [Hellions #1]

-) After his second resurrection when he was killed on Arakko, Wild Child briefly wore a modified version of his costume, slightly darker brown in color, with a gray spiked collar, a gray belt around his waist, gray metal cuffs around his wrists and metal panels on gloves that covered his hands, leaving his claws exposed. [Hellions #7]

-) Kyle has since returned to wearing his first Krakoan-era costume.