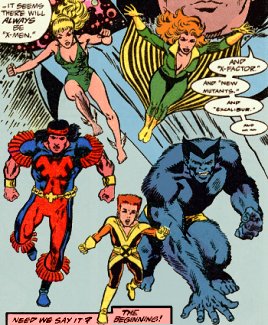 On Earth E105709, depicted in What if (2nd series) #9, both the old and new X-Men perished in their battle against Krakoa, leaving only Professor Xavier and former X-Man Beast. Hank asked Moira MacTaggert to visit the Professor, due to his depression. Moira brought along Rahne Sinclair, as she couldn’t bear the way the child was treated by her loveless guardian, Reverend Craig. Just as in the main universe, Count Nefaria soon threatened the world and the Beast used a machine to contact several mutants and teleport them to Nefaria. Despite not yet having manifested her mutant power, Rahne was recognized by Cerebro and inadvertently teleported along as well. When the battle was in favor of Nefaria’s Ani-Men, Xavier used his telepathy to prematurely awaken Rahne’s wolf powers, which turned the tide. Afterwards, Rahne joined the newly-formed X-Men. 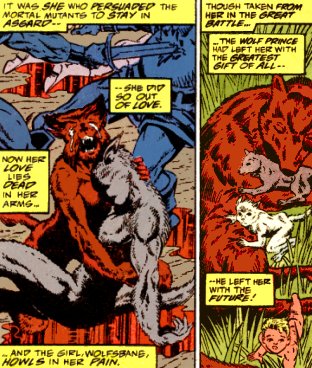 When the New Mutants and X-Men were in Asgard, Loki forced them to vote on whether they’d all stay or all leave. Although she yearned to be with wolf prince, Hrimhari, for the sake of her friends, Rahne could not stay. As shown in What if (2nd series) #12, in another timeline, Loki allowed all of the assembled mutants to make an individual choice whether the would want to stay or not. Quite many of them accepted the offer and started new lives in Asgard. For a time, Rahne was happy with her wolf prince but, eventually, a war broke out between Norn Queen Karnilla, the death goddess Hela and the rest of Asgard. The wolves fought on behalf of Asgard but their prince was slain in battle. The war at an end, Rahne gave birth to three children/cubs her lover had given her. Just like she was now considered the queen of the wolves, several other mutants had become rulers of other factions in Asgard and, for the first time in centuries, all Nine Worlds of Asgard were at a lasting peace. 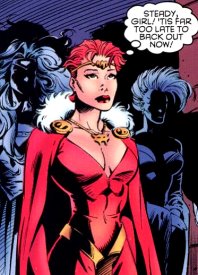 A very different counterpart, not even having mutant powers, is Queen Rain of another dimension called Geshem, some sort of medieval place with lots of magic involved. The counterparts of several other New Mutants and X-Men are serving as her maids or guards and, later on, Rain married one of her underlings, Douglas Ramsey.

Ancient prophecies foretold that Rain would be consumed by “the Beast” at her sixteenth birthday, which is why a sorcerer caused her and the main universe’s Rahne to trade places, until the beast (actually Wolverine who had been summoned by a rivaling magician) was soothed. However, it later turned out that the prophecy was meant metaphorically, Queen Rain having to face and come to terms with her inner beast. That not having happened, she was slowly going insane, also affecting the land to which she was magically connected. She was sent to the main universe a second time, so that Professor Xavier could help her get to terms with herself. In the meantime, Rahne filled in for her counterpart as Geshem’s queen. 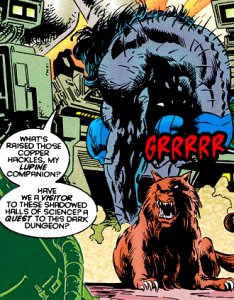 In the Age of Apocalypse, Rahne is only briefly glimpsed in Sinister’s citadel, where hundreds of people were held to await torture and genetic experimentation. Her human personality completely submerged under the wolf, one can assume that either Sinister and the Dark Beast had performed experiments on Rahne for her to be that way, or that she found reality too hard to bear and gave up her humanity. 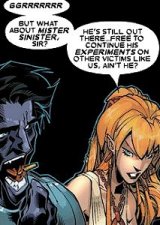 After the fall of Apocalypse, Rahne returned to the Institute and became an X-Man, helping them hunt down Apocalypse’s surviving allies. Rahne’s whereabouts and status are unknown after Weapon X had taken over where Apocalypse left off. 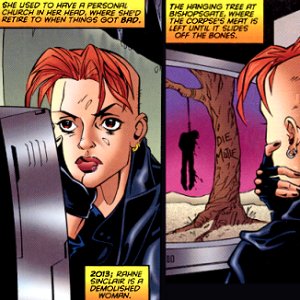 In one version of the apocalyptic future called Days of Future Past, Rahne was a broken woman, staying with the remnants of Excalibur led by Pete Wisdom. While in the United States, the X-Men and most other superheroes were already killed or captured by the Sentinels, Great Britain faced problems of their own. Wisdom sent Excalibur on a mission to save Douglock from Black Air, the evil, secret organization that had taken over the country, but the team found themselves lured into a trap – as Douglock had become Black Air’s major weapon. Though not shown, it seemed that none of the group survived the mission. 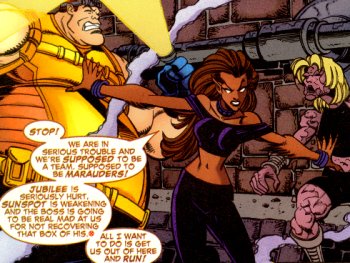 The Wolfsbane of the Mutant X universe doesn’t seem to be too different from the one from the main universe. However, she was part of a group calling themselves the Marauders. With constant bickering and arguing with each other, Rahne seemed the most reasonable member and had never actually wanted to join them, apparently having been forced to do so. When the Marauders stole a huge box for their mysterious employer only to have it stolen from them in return, they feared their employer’s wrath and tried to escape in the Morlock Tunnels, but Rahne sensed that he was already after them. Their fate remained unclear. 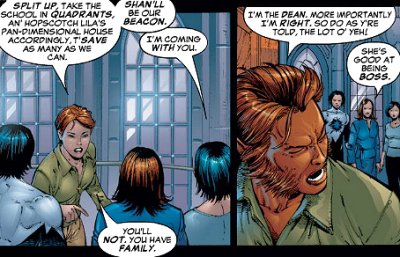 In the alternate future depicted in X-Men: The End, Rahne was the Dean of Students at the Institute, which was being run by Scott and Emma. Being Scott’s right-hand woman, she was in charge of the students’ welfare. When the school was attacked by three Warskrulls posing as some of the X-Men’s deadliest (and deceased) enemies, she and Northstar set about rescuing as many of the children as they could, taking them through a portal to the safety of Lila Cheney’s home. When the anti-matter fusion reactor that powered the mansion was damaged and about to explode, Rahne quickly ordered Lila’s home sealed, though she was left outside of it. When the mansion exploded, Rahne was killed instantly.

In the Ultimate Universe, Rahne was first seen as a freak show attraction in a traveling circus before being recruited by Stryfe to serve in the Mutant Liberation Front. After the group was defeated by the X-Men, Wolfsbane disappeared and resurfaced some time later as a member of Alpha Flight. She now went by the codename Sasquatch. She and her team used the power-enhancing drug called “Banshee.” Claiming Northstar was Department H property, Alpha Flight abducted him from the Institute. When the “Banshee”-riddled X-Men finally went to rescue him, a fight ensued and Rahne had her arm accidentally teleported off by Nightcrawler. 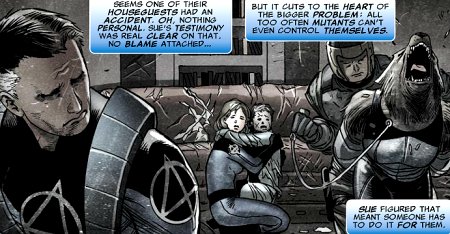 In the warped reality called the Age of X, Rahne was being harbored by the Fantastic Four to keep her safe from the government watchdogs. At some point, however, she hurt Franklin Richards. This was too much for Sue Richards, who was against her being there in the first place. She alerted the authorities to her presence and Rahne was arrested, along with the other members of the Fantastic Four. This family tragedy led Sue to join the anti-mutant superhuman forces led by Captain America. 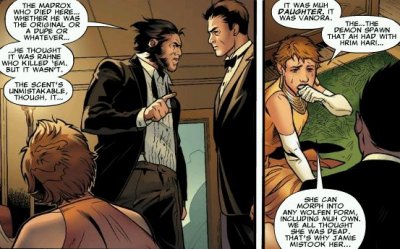 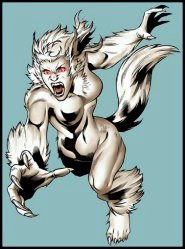 In the future reality first shown in X-Factor #229, Rahne gave birth to a daughter, Vanora and raised her in Asgard. Unfortunately, the child turned out to be evil just the same and was evidently hired by Layla Miller to kill Jamie Madrox and herself on their wedding night. Later, Vanora was sucked through a portal and ended up in the 616 universe. She has since encountered this reality's version of her mother and her "brother" Tier.

Click the image of Vanora above for a larger image 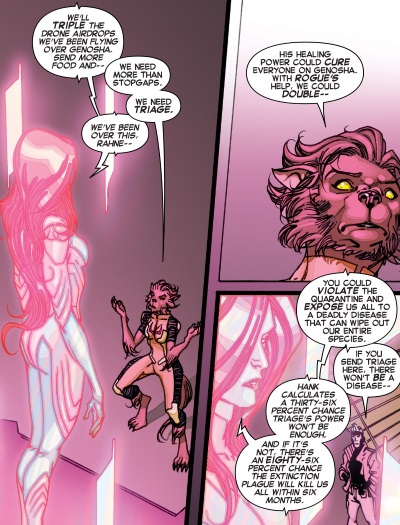 On the Battleworld domain that depicted events a few years after the X-Tinction Agenda event, Wolfsbane had chosen to remain on Genosha to look after the mutates. Becoming romantically involved with Havok, the two were the de-facto leaders of the island but they soon ran into trouble when a disease broke out that only affected mutants. The island was quarantined and the inhabitants were left to suffer. Wolfsbane and Havok were so desperate they broke quarantine to kidnap the mutant healer Triage, as well as Rogue, so they could help the sick. The assault on the X-Mansion worked and Triage was able to heal many of the sick, with the help of Rogue. The X-Men staged a counter-strike to get their kidnapped friends back but during the assault they discovered that one of Genosha's scientists had used Triage to resurrect Cameron Hodge. Wolfsbane and Havok ended up sacrificing their lives to save the inhabitants of Genosha from the evil cyborg.

On another Battleworld realm, that of K'un Lun, Wolfsbane was a member of a group of outcasts who lived in the sewers. She was originally a part of the wolf clan of martial artists, but was exiled from them for falling in love with Cy, a rival from another school of training.

With her studies incomplete she remained in her half-human, half-wolf form and eventually banded together with other outcasts for survival. When the Emperor's disgraced son, Shang Chi, came back to the city the outcasts took him in and taught him all they knew. Shang Chi went on to challange his father for leadership of K'un Lun and he won. Rahne and the other outcasts were no longer shunned by the other clans as they were now part of the Emperor's inner circle.