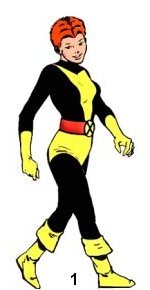 1) Like all New Mutants, Rahne started with the standard black and yellow training uniform with a red belt and X buckle. Her suit was made of unstable molecules and disappeared when she changed into her transitional or wolf form. [Marvel Graphic Novel #4]

2) After their traumatic experiences at the Beyonder’s hands, Wolfsbane and her teammates were sent to Emma Frost for help and briefly joined her Hellions and wore their typical uniform: a tight, v-necked suit in two shades of magenta with a white triangle symbol over the heart. [New Mutants (1st series) #39-40]

3) The New Mutants sneaked out, using their intended graduation costumes (which, unlike their standard uniforms, had masks) only a few times. Rahne’s uniform consisted of an orange leotard with navy blue sleeves and tights, an X-belt, simple orange boots and gloves and a fitted mask which left the top of her hair free. [Uncanny X-Men Annual (1st series) #10, New Mutants (1st series) #54-55]

4) After the tragic death of Cypher and believing the X-Men to have died as well, the New Mutants decided to graduate and put together individual, albeit somewhat ragtag, costumes. Rahne’s uniform was basically a one-piece, dark brown leotard with boots, gloves and a pattern in lighter brown. [New Mutants (1st series) #61] 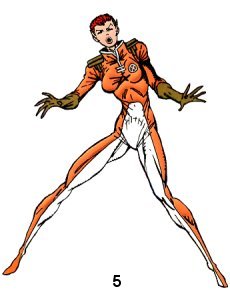 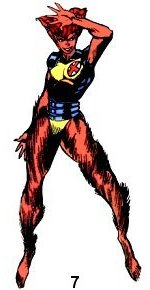 5) Boom-Boom redesigned everyone’s outfit after a stay in Asgard, so that they’d all have individual, yet similar costumes. Rahne’s outfit was an orange-brown suit with white inner thighs (all uniforms had that in common), white gloves, shoulder pads and an X-symbol on the chest. [New Mutants (1st series) #90]

6) As a Genoshan prisoner, Rahne was made to wear one of their skinsuits, in shades of brown and orange with her number 490 emblazoned on it. Later, her head was shaved and this number was tattooed on her forehead. During the mutate bonding process, the suit was fused to her skin and could no longer be removed. Fortunately, it was not visible whenever Rahne was in wolf-form or a transitional state. [New Mutants (1st series) #96]

7) All X-Factor members wore individual blue and gold designs. Rahne’s was a short leotard, which left her legs and arms free and had a huge X-symbol on her chest, combined with clunky dark blue boots. When Rahne was able to switch back to her human form again, she sometimes added light blue tights against the cold, though they would disappear whenever she was in furry form. [X-Factor (1st series) #72, 102] Rahne continued wearing the outfit, even after she left X-Factor to join Excalibur. 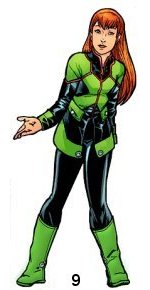 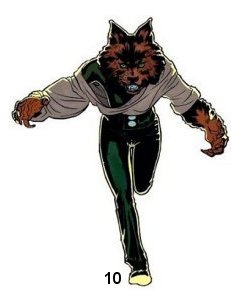 8) After Excalibur disbanded, Rahne was seen wearing a couple of non-descript bodysuits before temporarily losing her powers. When she regained her powers and first worked with X-Factor Investigations, she wore a simple bathing suit styled costume. The dark blue suit zipped up the front and had a narrow triangle of yellow from the neckline to the center of her bust. A yellow X symbol adorned the right side. [Madrox #4}

9) As a teacher at the Xavier Institute, Rahne wore a uniform that coordinated with her team, the Paragons. This look was primarily green and black and included a mid-length black jacket with a large, green X across the front descending from the shoulders with green cuffs and trim on the bottom of the jacket. Red piping accented the jacket. With this, Rahne wore black leggings and green boots. [New X-Men (2nd series) #12]

10) As a full-time member of X-Factor Investigations, Rahne wore a simple costume that echoed elements of team leader, Madrox's costume. She wore dark green leather pants with six silver buttons in two rows of three down the front and a matching, form-fitting scoop neck top with long sleeves. Over this, she wore a loose-fitting, light grey top that fell off the shoulder. She often wore the team's distinctive molded X belt and a cross. [X-Factor (3rd series) #1] 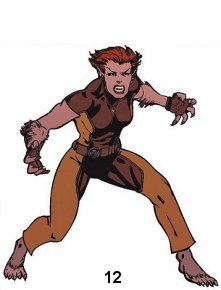 11) When she joined the X-Men's kill squad X-Force, Rahne began wearing a much darker and fearsome outfit. This form-fitting bodysuit was black with gray along the outer part of the top and the legs at the thighs. Lighter grey stripes on the shoulders and thighs added a bit of detail and looked like slash marks, fitting given that the members of X-Force mostly had claws or used blades. There were cutouts on the underarms that ran along the inside of her sleeves leaving her flesh or fur exposed. There were similar cutouts toward the back of her calves. With this she wore a slim, black utility belt with a red X symbol. The most bizarre feature was a full black face mask that completely obscured Rahne's face and hair. It was fitted with red lenses that enhanced her sight. When she transformed into her wolf form, this mask stretched to cover her lupine snout as if it was made of sleek black latex. [X-Force (3rd series) #1]

12) After giving birth, Wolfsbane rejoined X-Factor Investigations. She adopted a new look that matched the team's costume motif. The top was tight and short-sleeved in brown with tan panels that ran down the sides of her torso. This pattern continued to the leggings which were tan with brown on the inner legs. These pants were open and flared at the ankle. Rahne wore brown fingerless gloves, a brown X belt with X-Factor's distinctive molded X buckle and a simple gold cross necklace. [X-Factor (1st series) #226]