Rahne Sinclair was born and raised in the wild northwest highlands of Kinross, Scotland by her adoptive father, Reverend Craig. Craig was a stern Presbyterian reverend of the hellfire-and-brimstone school, who had made saving the soul of Rahne’s mother a project of his. Unknown to all, Craig was the one who impregnated Rahne’s mother, a lady of the night. Rahne’s mother died during childbirth and Craig took the child as a ward of the church, never admitting to anyone the truth of her parentage. Rahne’s upbringing was cold and loveless and she was raised to live in the fear of the Lord. 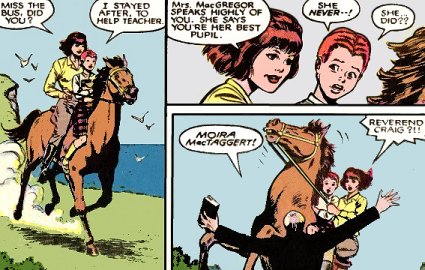 Rahne took on the role as the church’s caretaker where the good Reverend could keep an eye on her. He kept telling her she was a product of sin, the child of a sinner. He made her feel ashamed of her roots and guilt-ridden about her urges, which affected Rahne deeply and shaped her personality for most of her life.

One day when Rahne missed the school bus, she was noticed by Moira MacTaggert, who offered to take her home on her horse. Rahne gratefully accepted, which infuriated the Revered Craig when he found out. [Classic X-Men #2] 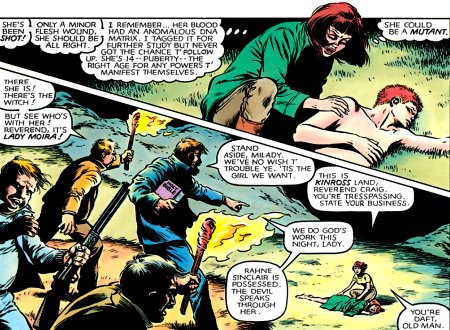 At the age of thirteen, Rahne discovered her mutant power of lycanthropic shape shifting from human to wolf or into a transitional form. Hatred and fear led Craig to assemble an angry lynch mob to kill the child he had raised. Believing her the devil’s creation, he and his mob chased her across the slopes of An Morag, where she was shot and eventually stumbled off a small embankment. Luckily, she was found by Dr. Moira MacTaggert, who recognized the injured girl. Moira defended her from the mob, as they were now trespassing on her land. Moira then became Rahne’s legal guardian.

Moira took Rahne to Charles Xavier’s School for Gifted Youngsters, where Rahne met Professor Xavier and another new student, Xi’An Coy Manh. Xavier, at the time, believed his students, the X-Men, dead and was reluctant to take on new students, but circumstances left him little choice, as the villain Donald Pierce was trying to kill young mutants. Xavier’s new students fought him and triumphed. During that adventure, it was also hinted at that Rahne possessed a form of healing factor (though in no way as impressive as Wolverine’s), as she quickly recovered from what seemed to be a lethal wound. [Marvel Graphic Novel #4]

Rahne was given a uniform of unstable molecules, which would disappear when she shifted to wolf form or her transitional form. Given the codename Wolfsbane, Rahne became a founding member of the New Mutants. Rahne quickly learned that, while in wolf form, she had a psychic rapport with Danielle Moonstar, who could communicate with animals. Dani soon became her best friend and acted as something of an elder sister to the needy young girl.

Rahne was a study in contrast. Thanks to her upbringing, she was painfully shy but, at the same, fierce in her emotions. She loved being a wolf, sometimes moreso than being a human, but was afraid this meant she was evil. Being a young teenager, she also had a big crush on her teammate, Sam Guthrie, who treated her kindly but was oblivious to her true feelings. [New Mutants (1st series) #1]

While at a local arcade, the New Mutants ran into trouble with a gang who mistook the team for normal teens. After a brief display of their powers, the mutants were chased by an angry mob, and eventually saved by Cloak and Dagger. Unfortunately it was not before both Wolfsbane and Sunspot were injured and kidnapped by a gang who planned to use on them the same drug that

transformed Cloak & Dagger into what they were. The New Mutants, Cloak & Dagger and Spider-Man arrived too late. They found Wolfsbane and Sunspot monstrously transformed, with Rahne, more feral than usual, slamming the mobster unconscious. Dagger used her light powers to drain the drug’s effect from the youths, and displaced it inside of Cloak. Rahne and Roberto seemed healed but this adventure would, nevertheless, have consequences. [Marvel Team-Up Annual #6]

After the supposed death of their teammate, Karma, Rahne accompanied her teammates on an expedition led by Nina DaCosta into the jungles of the Amazon. They were attacked by a group of native girls 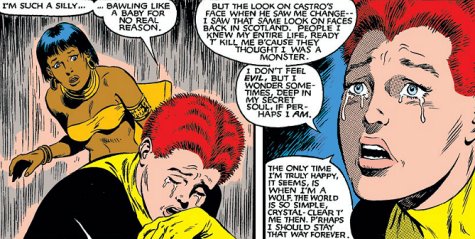 but defeated them, taking one hostage for examination. Rahne would later pour her heart out about all her fears and using this native girl, Amara, as a sounding board, believing that Amara could not understand a word she was saying. She told her things she did not share with the others, such as her confused feelings about Reverend Craig and herself. Later, Rahne found out that Amara was in disguise and not the Indio girl she pretended to be but capable of understanding English. It took Rahne some time to forgive the other girl for that deception. 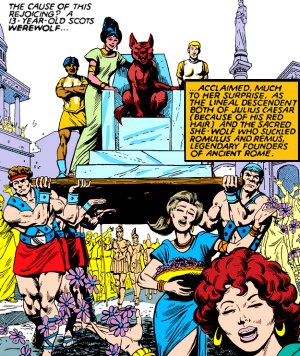 During their stay in Nova Roma, Rahne was flattered that she was treated like a goddess reborn, the Nova Romans thinking her a direct descendant of the wolf that had raised Romulus and Remus, the two brothers who, according to myth, built Rome. Rahne’s anger at Amara blinded her to the evil of Senator Gallio, enemy of Amara’s father and the true bad guy. She later regretted her rashness and, once more, plagued by self-doubts, wondered if her friends truly cared about her as a person or only because she was a mutant. [New Mutants (1st series) #8-12]

Upon returning to Xavier’s school, another new recruit to the New Mutants troubled her as well in the form of Illyana Rasputin. Illyana was a demon sorceress and Rahne did not trust her, let alone feel comfortable around her. Rahne’s strong religious beliefs put her at distance from Illyana, whom she believed was Devil-spawn. She felt similar about the X-Men’s Nightcrawler, due to his demonic appearance. All this time, she still could not rid herself of Craig’s words, that she herself was a product of the devil, despite her teammates protests the opposite. This inner conflict would trouble her for years. During that adventure, she also met and befriended Catseye, a catlike shapeshifter on the enemy team, the Hellions. [New Mutants (1st series) #15-17] 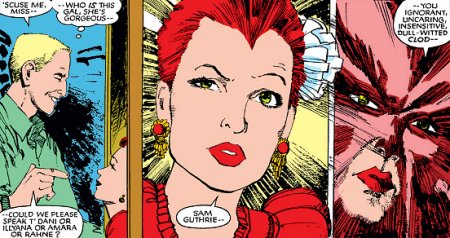 After the team’s excruciating fight against the Demon Bear, the girls of the Mutants hosted a slumber party where they invited some neighborhood girls they met recently. Illyana and the others tackled Rahne and made her over, turning the plain girl into a true beauty with make-up and dress, so well in fact that Cannonball did not even recognize her, leading to her to be angry at her crush once more, for what she mistook as a practical joke.

That night, the party was interrupted by an alien known as Warlock, who was near death after fleeing from his home-planet. Rahne understood his feelings of being alone and was the first among the New Mutants to reach out to this creature and try calm him. Rahne's compassion and understanding led to Warlock becoming their latest team member. [New Mutants (1st series) #21]