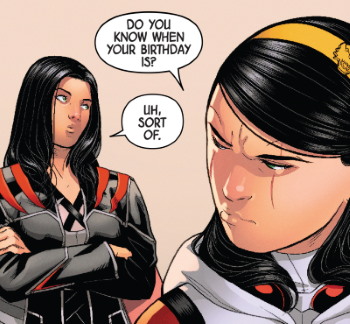 After recent events, Laura felt her time as Wolverine had come to an end and decided to reclaim her role as X-23 once more. Her relationship with Angel also petered out, as both found themselves working far away from each other and they barely had time to talk. After learning that numerous samples of Wolverine’s DNA had made it on to the black market, she knew she had to hunt them down before they were used to create more super soldiers. Laura worked closely with Gabby to hunt down anyone who had access to the samples, and the two worked well as a team. It was not without issue though, as Gabby was more carefree than Laura and desired to know things, such as when their birthdays were. As a clone, Laura struggled with the concept of birthdays and did her best to avoid the subject with Gabby.

When Beast asked X-23 to look into the disappearance of a scientist who had ties to studies on mutants and regeneration, Laura ended up finding the answers much closer to home than she wanted. She managed to track the scientist down to an abandoned church but, once inside, discovered she had walked into a trap set by her former teammates, the Stepford Cuckoos. After dealing with the sisters’ psychic illusions, she discovered that it was merely a distraction so they could kidnap Gabby. X-23 quizzed the scientist and found out that the Cuckoos had resurrected their two dead sisters but the process was flawed and the clone bodies were unstable, with Sophie dying once again. They intended on using Gabby as a host, into which they would imprint Esme’s psyche. 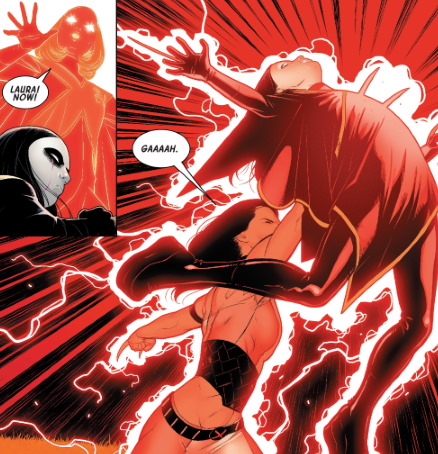 Laura managed to track the Cuckoos down and found Gabby and Esme strapped into a psychic transfer machine. She attempted to destroy it but was moments too late and the process was complete. In the chaos, Laura destroyed the machine but was severely injured by the subsequent blast. As she recovered, she heard a voice in her head and quickly realized that it was Sophie, the seemingly dead Cuckoo. Sophie revealed that Esme had actually murdered her and would probably do the same to her other sisters, so X-23 joined forces with her to stop her. Laura was forced to fight against an Esme-possessed-Gabby, whilst Sophie and the other Cuckoos turned on their sister and fought her psychically. Esme was purged from Gabby’s mind and sent back to the grave once more, allowing Laura to reunite with her sister again. [X-23 (3rd series) #1-5]

A new mission soon came in when several scientists studying genetic degradation were all found murdered. Laura and Gabby were called to investigate and they soon identified another potential 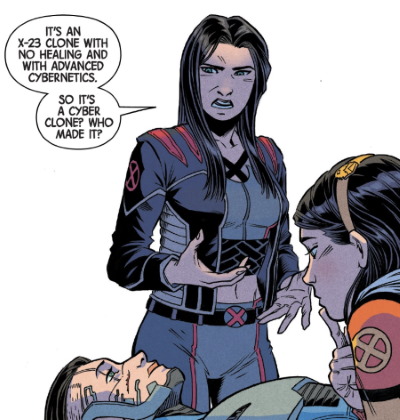 victim who was working on the same issue. Laura ambushed the killer and was shocked to discover it was yet another clone of her, only this one was a cyborg. After capturing the clone, she consulted with Beast, who confirmed it was created from a damaged sample of her DNA. Unlike Gabby, this new clone was unable to heal and so whoever created her had used advanced cybernetics to make up for it. Whilst Gabby was happy at having a new member of the family, Laura was more concerned, as she had been through this all before, only this time she had a feeling it would end badly. Laura tracked the designers of the clone down to a company called Medi-X-Tronics and found out that they were mass producing cyborg clones of her.

Things began to fall into place when she realized the mastermind behind it all was Dr. Chandler, the man who created Gabby and her sisters. After Laura spared his life previously, he had escaped custody and began working for Med-X-Tronics on his latest version of X-23’s clones. Unrepentant, he set an army of cyborg clones on Laura, forcing her to destroy his handiwork as he escaped. She caught up with him as he was fleeing in a helicopter and she leapt on to it to 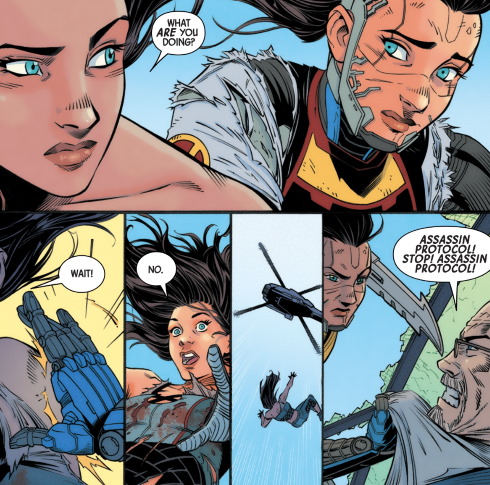 stop him. She was surprised by the arrival of the original cyborg clone, whom Gabby had befriended and led to the complex. The clone attacked Chandler and pushed Laura off the helicopter to safety, before purposefully crashing it killing them both. Afterwards, Laura managed to destroy some of Dr. Chandler’s research, but she knew a large part of it was still out there. [X-23 (3rd series) #7-10] 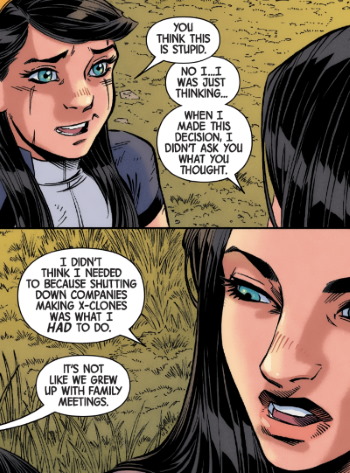 Laura was determined to track down any company using her DNA to make clones in a bid to shut them down permanently. Her single-minded attitude towards the mission began to cause a rift between her and Gabby, as the young girl wanted to help any new clones instead of destroying them. After a particularly heated argument with Gabby, her sister stormed out on her own and didn’t come home. After tracking her with a locator beacon, Laura found Gabby hijacking a private train full of cloned turkeys. The turkeys had X-23 genetic material implanted into them and Gabby was determined to protect them, no matter the cost. Laura relented and decided to help Gabby rather than fight against her, and so the two joined up to save the turkeys. Afterwards, X-23 and Gabby had a heart-to-heart and Laura realized she hadn’t been considering her sister’s feelings about destroying clones. [X-23 (3rd series) #11-12]

Laura was one of the many X-Men who joined together to take on the threat of Nate Grey when he used his immense powers to try and shape the world in his image. When Nate merged with the even more powerful Legion, he warped reality to create the Age of X-Man, a world where emotional connections to one another were outlawed. In this new world Laura's memories were wiped to the point she didn't know about Gabby. Nate's influence started to faulter as time went on and Laura's memories began to return up to the point she could remember everything from her previous life. Once again, Laura and the X-Men fought Nate and finally defeated him, returning the world to normal once more. [Uncanny X-Men (5th series) #1-10, Age of X-Man crossover] 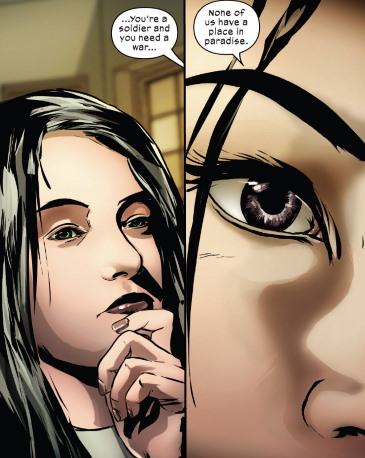 The X-Men, and the mutant race as a whole, went through a monumental shift in their status-quo. Setting up home on the mutant island of Krakoa, Laura and the X-Men, led by the resurrected Professor X, asserted their position to the whole human race. With a series of protocols that allowed any deceased mutant to be resurrected again, there was less danger in being a mutant now. The apparent security of Krakoa started to wear thin on Laura, who wasn't used to feeling relatively safe. Soon enough she was approached by Kwannon, who was looking for help with a personal issue of her own. Seeing that Laura was getting bored on the island, as well as needing her skill-set, Kwannon enlisted her in helping to stop a newly created drug called Overclock from being released to the world. Laura relished in the opportunity to throw herself into danger once again, stopping a drug ring and saving a group of children in the process. [Fallen Angels (2nd series) #1-6]

With the relative safety of Krakoa under threat, it seems Laura will still have a place as one of the mutant race's deadliest champions.