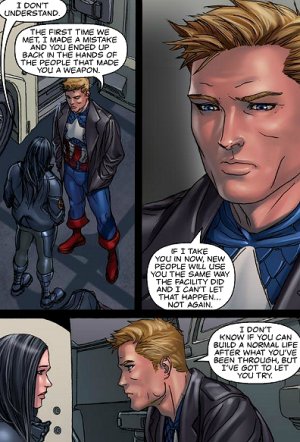 Before turning X-23 over to SHIELD for her many crimes, Cap brought in Daredevil in his civilian guise to help him determine if she was telling the truth. The two heroes listened in horror as Laura told them her story and the many details of her training, torture and assignments for the Facility. They also learned of her attempts to build a normal life in San Francisco and all that she had sacrificed to keep Debbie and Megan safe. In the end, Daredevil advised Cap that X-23 had been used, that her mother's letter made it clear that others were responsible for her actions and that, if he turned her over to SHIELD, they too would use her as a weapon. Initially, Cap's own feelings of guilt urged him to turn her in to the authorities, but ultimately he heeded Daredevil's advice and gave X-23 her freedom and a second chance. He urged her to find Logan and try to find a life and purpose with the X-Men. [X-23: Target X #1-6]

Unfortunately, Laura did not heed Captain America's advice. She made her way to New York and soon found herself a new master of sorts. After a life of abuse and control, X-23 was used to having someone else calling the shots. She found this again as a prostitute in the service of a pimp called Zebra Daddy. X-23's special attributes made her especially popular among clients who were looking for physical abuse in addition to sex. She rarely spoke but performed her tricks with her typical diligence. However, she continued to cut herself as she did while at the Facility.

Things only got worse when one of her regular masochistic johns committed suicide in front of her. This event drew the attention of the homeless young mutant Kiden Nixon, who was experiencing visions that led her to X-23. Kiden and her teacher tried to help X-23 and, along with some other wayward mutants, they formed a small, desperate group. When Laura's pimp came after her, she was at first willing to go with him until he ordered his thugs to kill Kiden and her other new friends. X-23 fought back, killing his men and eventually Zebra Daddy himself in defense of her new family. [NYX #3-7]

After Zebra Daddy's death, X-23 and her new friends sought refuge in District X. Laura found legitimate employment as a waitress at a theme bar in Distrct X called Wannabees, where staff and patrons dressed as mutants. When an investigation into local killings led the XSE to the club, the X-Men soon realized that X-23 was the mutant they were hunting, though she was not involved in the way they suspected. The dead men had been thugs killed by Laura after they had threatened new friends of hers in the District. During this encounter, Logan learned more about X-23's history and origins, which only served to deepen his feelings of responsibility for the girl. He was now determined to bring her to the Xavier Institute. [Uncanny X-Men (1st series) #450-451]

X-23 left behind her friends in District X to start a new life among the mutants at Xavier's. Wolverine kept close tabs on her, taking her on field missions and having her room with Kitty 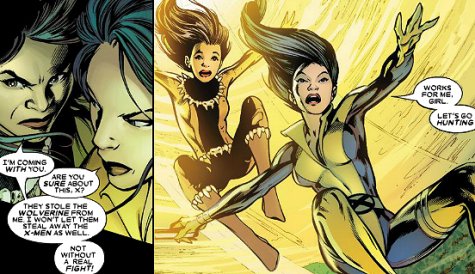 Pryde and Rachel Grey to help her adjust to life as an X-Man. It took some time for X-23 to adjust to thinking for herself and not just reacting on instinct or obeying orders. She was eager to prove herself and find her place though, pulling unnecessary monitor duty and following up on minor alerts. This led her to a brief encounter with Spider-Man, whose banter she found distracting and annoying. [Marvel Team-Up (3rd series) #5-6]

X-23 chafed under Cyclops' strictness and she found herself on edge in this new setting. She spent time observing Wolverine, on occasion being overprotective of him. She followed him when he went on a solo mission, getting tangled up in senior X-Men business in the Savage Land. During this mission, X-23 found herself teamed with the newly resurrected Psylocke in an effort to rescue Logan and the others. The two hit it off instantly, with X-23 carefully observing and mimicking Betsy in her efforts to fit in. [X-Men (2nd series) #165, Uncanny X-Men (1st series) #455-460]

Struggling to find her place amongst the X-Men, X-23 left the Institute and returned to the streets. Still drawn to help those in need, she came to the aid of a group of teenagers who were having an altercation with some undercover A.I.M. agents. During the fight, she was suddenly possessed by

the Uni-Power and transformed into Captain Universe, the very phenomenon for which the A.I.M. agents had been searching. When the Uni-Power enlisted her help to destroy any records that A.I.M. had on it, the story resonated with X-23’s own past and she agreed to help. With the help of a S.H.I.E.L.D. agent called Scorpion, X-23 entered the nearby A.I.M. base and destroyed all records of the Uni-Power. With the data destroyed, the Uni-Power thanked her for her assistance and left her, returning her to her normal self. [Captain Universe/X-23 #1]

After M-Day hit, causing most of the world’s mutants to lose their powers, X-23 was one of the 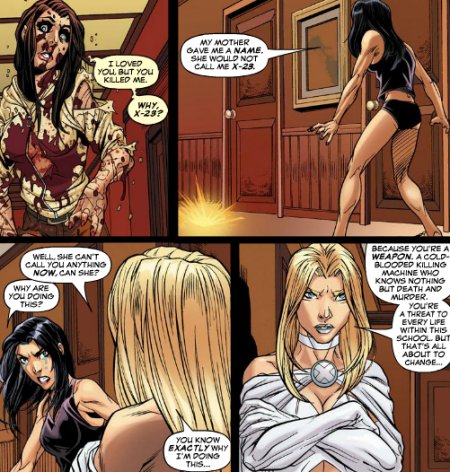 fortunate few to keep theirs. With the world an even more dangerous place for mutants, Wolverine persuaded X-23 to return to the Institute, though she didn’t receive a welcoming reception. The student body had been reduced to a fraction of its size after M-Day and the remaining students were taking their frustrations out on each other. Rockslide and Hellion, two of the more outspoken students, made no effort to hide the fact she wasn’t wanted there. It wasn’t just the students who took issue with X-23. After penetrating X-23’s mental shields and seeing all the things the young girl had done, Headmistress Emma Frost became vocal in her dislike for her and even went as far as to cast illusions of X-23’s mother into her mind as she slept in a bid to drive her away. Fortunately, not everyone was so cruel to Laura and her new roommate Dust happily welcomed her, although she was uncomfortable when she learned that X-23 had killed people. [New X-Men (2nd series) #20-22] 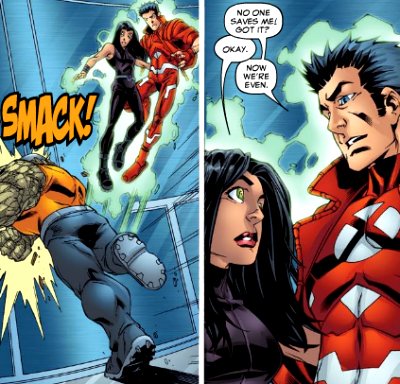 When the school held a competition to determine who would be put in the New X-Men squad, Emma telepathically told Hellion to take out X-23 and during the battle she entered X-23's mind and stopped her from moving. Hellion was going to go in for the winning blow but, when he saw Onyxx charging straight at X-23, he had a change of heart and saved her from harm. Emma was annoyed and out of spite she left X-23 off the final squad, though she was overruled by Cyclops, much to Emma’s disdain. [New X-Men (2nd series) #23]

Conflict from within was soon dwarfed by conflict from without when Reverend William Stryker and his Purifiers attacked the school. Armed with knowledge obtained from a Nimrod Sentinel from the future, Stryker sought to identify and kill mutants that would one day be a direct threat to him. X-23’s roommate, Dust, was one such threat and so Stryker used Icarus, a boy on whom she 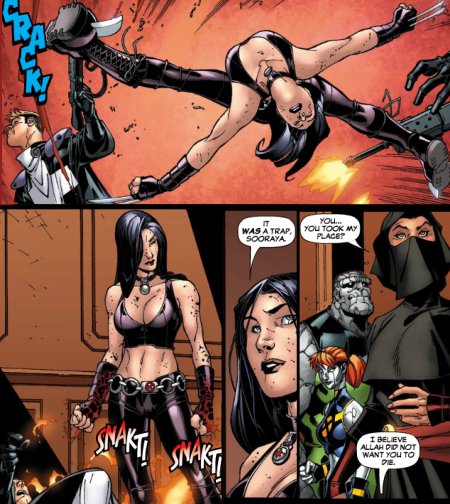 had a crush, to draw her away from the school so she could be killed. Having smelled death on the young man, X-23 attempted to warn Dust, but was ignored. Taking matters into her own hands, X-23 knocked out Dust and took her place. Dressed in her abayat and niq’b, she went to the location where Icarus told Dust to go and sure enough she was gunned down by the Purifiers. Surviving due to her healing factor, X-23 took out the gunmen and returned to the school in time to help the X-Men fight Stryker and his Purifiers. She arrived in time to see Elixir, another student, kill Stryker himself. [New X-Men (2nd series) #24-27]

Though Stryker was dead, his damaged Nimrod unit still functioned and sought out Forge in Dallas to force him to enact repairs. Unknown to Nimrod, Forge secretly alerted the X-Men by using a device hidden in Surge’s gauntlets. Instead of alerting the X-Men, though, X-23 and the rest of her team decided to get revenge for their fallen teammates and took the X-Men’s jet to Dallas. By the time the team arrived, the Nimrod unit had forced Forge to build it a new body even more powerful than before. It took a combined effort of X-23, Mercury and Surge to beat it. 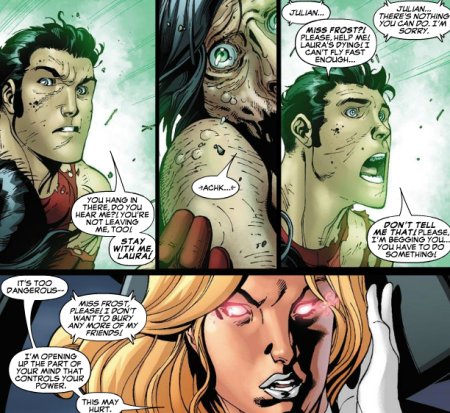 During the battle, X-23 had been gravely hurt, her skin greatly charred, and worse her healing factor didn’t seem to be working properly. With the jet damaged and needing to get her help quickly, Hellion became distraught and decided to fly her back to the Institute on his own. Carrying her body, Hellion telepathically pleaded for help from Emma, who opened up his powers, allowing him to fly faster. He made it back to the Institute just in time for Elixir to save X-23 with his healing touch. Seeing X-23 safe, Hellion collapsed and, when he briefly woke up 34 hours later, he found X-23 watching over him. [New X-Men (2nd series) #28-32]