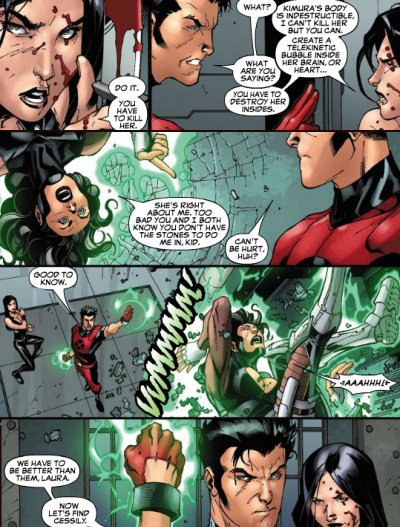 him, often watching him when he wasn’t aware. Her feelings towards him didn’t go unnoticed and X-23’s teammate, Mercury, took her for bonding session at a local café where they could talk in private. While there, the two girls were attacked by X-23’s old handler, Kimura, and a squad of soldiers. X-23 assumed they were there to capture her but their target was actually Mercury and, after a brief scuffle, Kimura escaped with her captive. X-23 planned to rescue Mercury on her own but was noticed by Hellion, who insisted on joining her. Eventually, the trail led to the Facility’s main base, where they confronted Kimura. At first, Kimura gained the upper hand but, when Hellion turned the tables, X-23 urged him to kill her, something which she herself could not do. As he had maintained during their search, Hellion explained that they had to be better than their foes, so he settled for launching her out of the building instead.

They eventually found Mercury, as well as the reason for her capture. Before he died, Reverend Stryker had paid the Facility to create an indestructible beast that could hunt and eat even the most powerful of mutants and the Facility had used Mercury’s skin to make these creatures more durable. Sure enough, the creatures, each designated “Predator X,” were too powerful and the two were only saved by arrival of the X-Men, who had been tracking the missing teens and arrived just in time to turn the tide of the battle. The whole affair altered the perspectives of several involved. While X-23 began to question whether she should have left the school, Mercury broke down after realizing that her experience was just a hint of what X-23 had been forced to endure her whole life. Even Emma had a change of heart and, when Kimura secretly tracked them back to the school and was about to shoot X-23 with a sniper rifle, Emma came to her defense and punished Kimura by removing her only happy memory. [New X-Men (2nd series) #33-37]

There was no rest for X-23 as she and several classmates were soon transported to the demonic realm of Limbo. Belasco, Limbo's occasional overlord, had kidnapped X-23 and a handful of 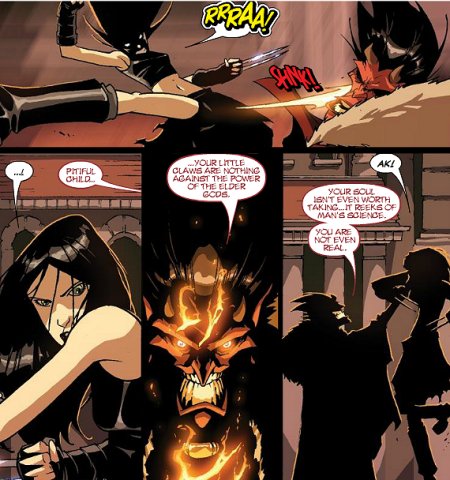 students whom he believed knew the whereabouts of his old pupil, the former New Mutant called Magik. X-23 was no match Belasco’s magic and, after declaring that she stank of "man's science" and had no soul worth taking, he incinerated her, only then to resurrect her to demonstrate his power. Rather than repeat her mistake in a direct attack, X-23 instead freed the Stepford Cuckoos, who used their telepathy to show Belasco the truth that the Magik he wanted was gone forever. Ironically, though Belasco refused to believe them and continued his onslaught, he was eventually defeated by a version of Magik that he himself had created. [New X-Men (2nd series) #38-41]

Though X-23 handled her trauma at the hands of Belasco much better than some of the others, she remained emotionally vulnerable. When she witnessed rather trivial romantic triangle between Surge, Prodigy and Hellion, X-23 grossly overacted by popping her claws and then fled in embarrassment. Afterward, Mercury found Laura cutting herself in one of the bathrooms. In a rare moment of openness, X-23 admitted that she didn’t know what was feeling and was scared she was going to hurt someone. [New X-Men (2nd series) #42-43]

The issues between X-23 and her New X-Men teammates once again took a backseat when the first mutant since M-Day was born. The baby became the target for a number of mutant factions and anti-mutant forces, each with a different agenda and desire to either control or destroy her. When the X-Men began concentrating their resources on finding the baby, X-23 and the New X-Men were not among these teams and felt that they were being sidelined. At first, the team obeyed but, once they realized that the Purifiers were involved, they decided to go after them themselves and tracked them down to a church in Washington D.C. The team was soundly beating the Purifiers but found they were outmatched when Lady Deathstrike and her Reavers showed up. X-23 specifically was infuriated when Deathstrike impaled Hellion through the chest. The group only escaped thanks to Pixie, who teleported them all away to safety. 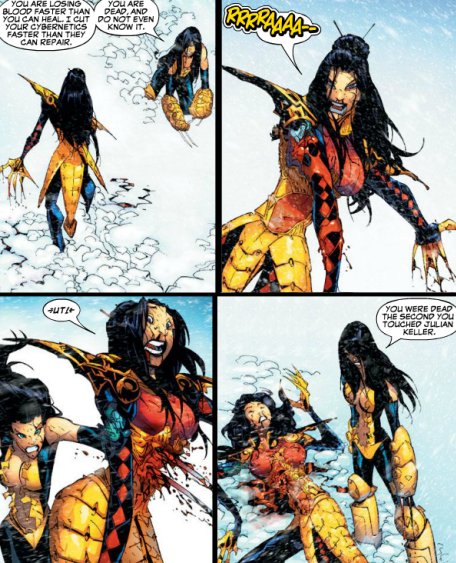 Events took a turn after the X-Men learned that Cable had control of the baby and Cyclops reformed X-Force in a bid to find him. Comprised mainly of trackers, including X-23, this version of X-Force soon located Cable in the mountains of Canada, where they found him under attack by Lady Deathstrike and her Reavers. Deathstrike immediately squared off against her nemesis, but Wolverine decided to pass the fight over to X-23, who had a personal grudge against the cyborg after she maimed Hellion. The two fought a brutal battle with Deathstrike initially gaining the upper hand and downing X-23. However, having again learned from a previous defeat, X-23 used her head (and her senses) to locate a vital part of Deathstrike’s anatomy and used the claw in her foot to make precision slashes which disabled the cybernetics in her arms. With her foe at a disadvantage, X-23 eviscerated Deathstrike and left her corpse in the snow. Later in the greater conflict, X-23 was among the many X-Men present for the final showdown on Muir Island in which Professor X was killed. In the aftermath, Cyclops decided to disband the X-Men altogether and the New X-Men team was forced to go their separate ways. [Messiah Complex crossover]

Though Cyclops had publicly disbanded the X-Men, he secretly continued X-Force, which would be a covert ops squad that would deal decisively with threats to the mutant race before they became serious issues. Among their number was X-23, an obvious choice given her years operating as an assassin and her emotional detachment from killing, though field leader Wolverine was against her involvement in the team. He wanted Laura to have a chance at being more than just a weapon but Cyclops insisted and had already sent her on her first mission. A group of Purifiers had broken into a S.H.I.E.L.D. base and stolen the head of the cyborg Bastion. Sent to investigate, X-23 infiltrated the base and tracked the Purifiers' new leader, Matthew Risman, to the late Reverend Stryker's church in South Dakota. She was soon joined by Warpath and Wolverine and together they found Risman and his Purifiers holding Wolfsbane, another X-Force member, captive. Ultimately, Risman managed to escape with Wolfsbane. X-23 was unapologetic, revealing that her mission was to kill Risman, not rescue Wolfsbane. [X-Force (3rd series) #1-2] 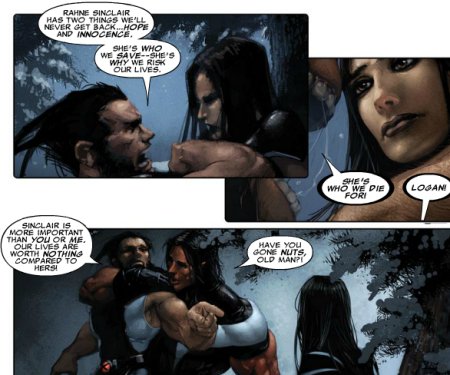 Though Wolfsbane was eventually located and rescued, X-23 sensed something was wrong, given that the Purifiers had not killed Rahne. None of the other team members listened to her and Wolverine even attacked her for being insensitive. He told her X-23 that Wolfsbane was more important than the rest of them and that she was why they risked their lives – she had an innocence and sense of hope that they no longer possessed.

Unfortunately, X-23’s feelings about Wolfsbane were well-founded, as she had been brainwashed by the Purifiers to attack Angel and bring his wings back to Risman. X-23 was the first on scene 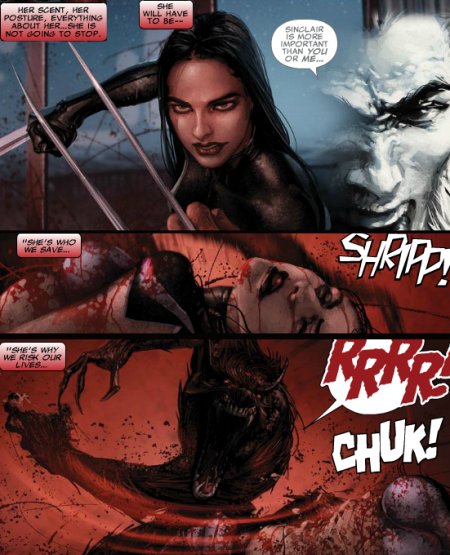 when Rahne mauled Angel and was about to attack Wolfsbane until she remembered Wolverine’s words. Instead of fighting back, X-23 allowed herself to be gutted by her teammate and let Wolfsbane get away rather than hurt her. Thanks to her healing factor, X-23 survived and together with X-Force followed on the trail Angel, who had been transformed by the trauma back into Archangel and was thus drawn to his own wings, which Risman was using for experimentation and implantation in humans. During the ensuing battle against the newly resurrected Bastion and the Purifiers, X-23 opted to fulfill her first (and still outstanding) mission of hunting down Risman. Before she could kill him, however, Risman was killed by the mysterious Eli Bard, who managed to get away before X-23 and Warpath could stop him. [X-Force (3rd series) #3-6]

X-23's former New X-Men teammate Elixir had also become entangled in X-Force's business but wanted nothing to do with the violent hit squad. X-23 decided it would be best if he couldn’t remember anything about the team and went against Wolverine’s wishes by revealing X-Force's existence to the Stepford Cuckoos, asking them to mindwipe Elixir. This never came to pass, however, as Elixir was needed on X-Force's next mission. The Vanisher had stolen a vial of the Legacy Virus from one of Mister Sinister’s labs and X-Force was ordered to track him down. During their efforts to retrieve and destroy all samples of the virus, X-23 became infected and, not wanting to die that way, rushed to commit suicide by leaping into a vat filled with hot molten metal. In a twist of happenstance, she was saved by Elixir, who physically stopped her. Having overheard an earlier comment and surmised that X-23 felt she wasn’t real, he managed to convince her to live and then he used his powers to purge the virus from her system. However, after healing her, he was exhausted and accidentally dropped her into the vat. Luckily, she only hit the side and sustained relatively minor burns (for her). [X-Force (3rd series) #7-10] 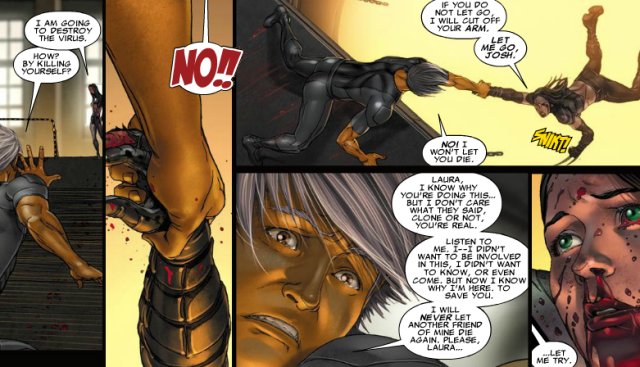