After all the things the two of them had been through recently, as well as switching bodies with an alternate reality Gwen Stacy [All-New Wolverine Annual #1], Laura decided that they needed to go off grid. She and Gabby headed to a remote cabin of Logan’s in the hopes of some peace and quiet. Unfortunately for them, they were being tracked. When Laura went into the nearby town, several airplanes doused the whole area in trigger scent. Laura blacked out and, when she awoke, she saw all the townsfolk had been slaughtered, apparently by her own hands.

When SHIELD happened to arrive just after, Laura knew she was being set up. Nick Fury Jr apprehended her, but he knew something was amiss when some of his nearby fighter jets were shot down by an aircraft with Madripoor’s flag on it. Laura managed to escape from SHIELD and collect Gabby before finding a boat to take her to Madripoor. Knowing that all her usual contacts were being watched by SHIELD, she chose a pirate boat to get her onto the island unnoticed. As they approached Madripoor, a helicopter appeared and Laura knew something was up. She discovered the cargo of the ship was children being illegally brought to the island. Laura was surprised when Bellona jumped down from the helicopter, having struck a deal with the captain of the ship. When Bellona threatened the lives of the children, Laura was left with no alternative but to go with her to meet her boss. 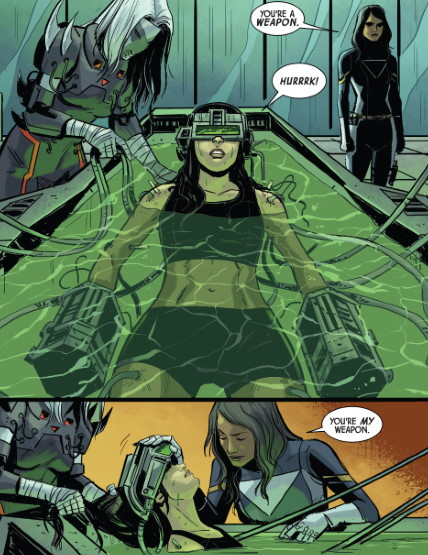 The mastermind behind it all was Laura’s former handler and torturer, Kimura. The sadistic woman delighted in tormenting Laura, explaining that the girl would now be a weapon for her as she attempted to become ruler of Madripoor. Laura declared she would kill herself before working for Kimura again, but the villain was one step ahead and revealed she knew where Laura’s aunt Deborah and cousin Megan were living. If Laura did anything stupid, then the rest of her family would be at Kimura’s mercy. Laura was powerless to do anything as she was tortured until her services were required. Kimura’s first target was the island’s current ruler, Tyger Tiger, who had secretly been doused with the trigger scent. Laura was literally dropped into the building and immediately went into a feral state when she smelled the trigger scent. After destroying a life-model-decoy of Tyger, Laura located the real deal but was stopped by the timely arrival of Gabby, Angel and Gambit. [All-New Wolverine #13-16]

Laura was taken to a bunker belonging to Tyger Tiger, where she recovered from the trigger scent’s effects. Gambit and Angel pointed out that, when she fought through Tyger’s base, she didn’t actually kill any of the guards, despite having ample opportunity to do so. They believed that she was subconsciously resisting the scent’s effects like never before, and they there might be a chance to cure her permanently. Despite Laura objecting to the plan, Gabby locked the two of them in a secure room together and then put a drop of the trigger scent on herself. Laura went into a frenzy, but Jean Grey was on hand to give her some psychic support. For the first time ever, Laura managed to overcome the scent’s effects and snap herself out of it.

It was at this point that SHIELD arrived, having tracked them down. However, no sooner had they met with Fury on his aircraft than it was shot down by Kimura who had followed them. Realizing that Kimura was the bigger threat, Fury Jr. joined forces with Laura’s group and they hatched a plan to take her out. After breaking onto her plane, Laura faced off with Kimura and demonstrated the ineffectiveness of the trigger scent when her nemesis threw a vial of it down. A fight broke out and Kimura was thrown out of the plane, closely followed by Laura. They landed on the beach but, thanks to Kimura’s invulnerability, she got right back up and continued her fight with Laura. 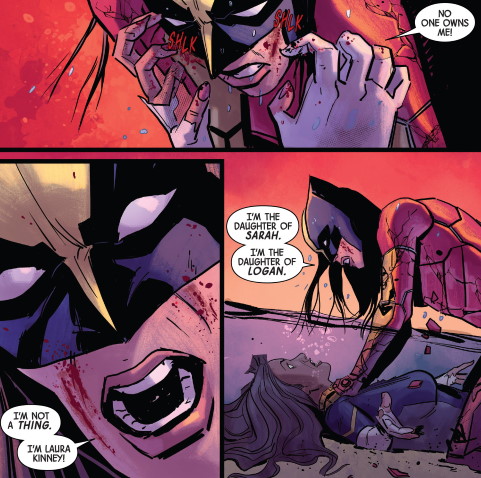 Deciding that Kimura was worth breaking her no-killing policy for, Laura caught the woman off-guard and held her head underwater until she drowned. In a liberating moment, Laura declared herself free from her past and all the tragedy that went with it. Afterwards, she met up with Fury Jr. and the rest of her team and was prepared to go into SHIELD custody for her crimes. In a surprise twist, Bellona revealed that, when the planes had doused the town with trigger scent, Laura had actually stabbed herself in the head rather than kill everyone. It had been Bellona who slaughtered the townsfolk, leaving Laura to take the blame. Laura was a free woman again and so she decided to take Gabby to see the only other family they had left, her aunt and cousin. [All-New Wolverine #17-18]

One day, when Laura and Gabby were on a road trip, they were attacked by a strange alien that managed to assimilate Laura’s healing factor. Amadeus Cho turned up soon after and informed her he was studying it when he managed to escape and copy his super strength. Laura and Cho teamed up and were soon joined by various other heroes, all trying to stop the alien before it became unmanageable. Fortunately, the arrival of the Ghost Rider helped turn the tide of battle and the alien was subdued. [Ghost Rider (8th series) #1-5]

With Gabby proving herself quite capable in combat, Laura started to take her on missions and train her properly. It was just as well, as the two were soon dragged into an intergalactic emergency with Laura at the center. An alien girl carrying a deadly virus had crash landed on Roosevelt Island, infecting anyone who happened to be near her. Before the girl died, she uttered Laura’s name, causing SHIELD to quarantine the area and summon Laura for help. Laura had no idea who the girl was, but it became apparent that her healing factor was the key to solving the situation. After AIM got involved and all the brightest minds on Earth put their heads together, they realized that Laura’s healing factor not only destroyed the virus but it also attracted it too. 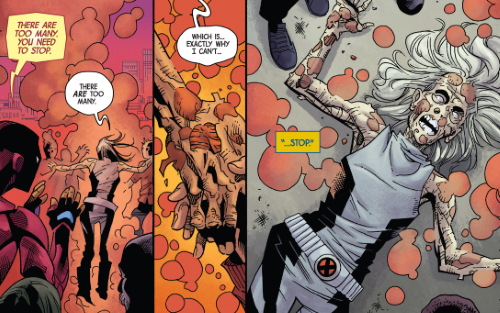 With that knowledge, they used Laura to purge the virus out of bodies of the sick and into her own, where it was destroyed by her healing factor. For once, Laura was able to use her abilities to heal other people instead of hurting them. She set out to heal the population of Roosevelt Island before the virus spread, but it was too much for her to do alone. Fortunately, SHIELD called upon anyone else with a healing factor to help, and so Gabby, Daken, Deadpool and Old Man Logan all leant a hand. One by one, their healing factors were overwhelmed by the virus until Laura was the only one left standing. Despite warnings from the doctors, Laura continued until everyone was cured, at a great cost to herself. [All-New Wolverine #19-21]

The virus had taken an enormous toll on Laura’s body and she remained in a coma for two weeks. When she eventually woke up, she was determined to find out why an alien child flew across the galaxy in search of her in particular. With the help of the Guardians of the Galaxy, Laura and Gabby travelled across the universe to from where the alien girl’s ship originated. Once there, they found a moon with a large facility enclosed in an impenetrable dome. As Laura and the Guardians tried to find a way in, they were attacked by a swarm of Brood, who took Gabby before anyone could stop them. Before they were overwhelmed by the Brood, the group managed to break into the facility, which they discovered was actually a laboratory. Even more surprising was the presence of Fang, the Imperial Guard member Laura met a few months before. The 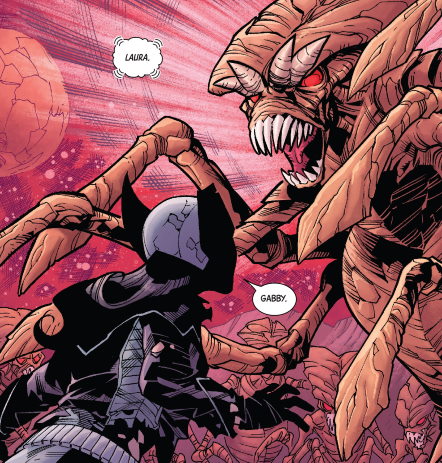 scientists revealed that they were attacked by the Brood and so they created a virus to kill them. However, it didn’t work the way they thought it would and the virus began spreading to the people in the facility. It was Fang’s idea to send for Laura, as he knew about her healing factor.

Laura was angry but more concerned for the welfare of Gabby, who was at the whim of the Brood Queen. Whilst everyone else wanted to escape the planet and destroy the Brood, Laura set off to rescue Gabby. She was devastated to discover that Gabby had been turned into another Brood Queen, but was just as shocked when she saw Brood-Gabby murder the former Brood Queen and take control of the hive. Everyone else knew how deadly the situation had become and tried to convince Laura that Gabby was gone and that they needed to blow up the moon. Laura kept on hearing Gabby’s voice in her head and knew her sister wasn’t completely gone. Setting off on her own, she confronted Brood-Gabby to find her instincts were correct. Gabby had managed to regenerate her body within the Brood Queen’s and she burst out of it, much to Laura’s relief. After rejoining the Guardians and blowing up the moon to stop the spread of the virus-infected Brood, Laura and Gabby headed back to Earth. [All-New Wolverine #22-24]