The story of Adamantium begins with the development of Captain America’s famous indestructible shield. It was actually many decades before Cap’s shield was connected to Adamantium in the comics. In fact, the shield’s composition was originally nothing special. In Avengers (1st series) #34, Captain America’s shield was disintegrated by the Living Laser’s deathtrap, and Cap didn’t bat an eye. After returning to the mansion, Cap returned to battle with shield in hand, the implication being he just grabbed a spare shield off the rack. Years later (and well after the introduction of Adamantium and Wolverine’s claws), 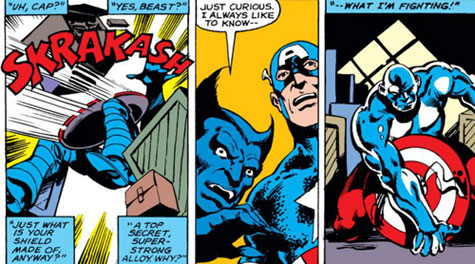 Myron MacLain was a scientist working for the United States government at the start of World War II. During his efforts to create a new, unbreakable alloy for the war effort, he was provided with a sample of Vibranium after the young Captain America’s successful expedition to Wakanda (as seen in Black Panther (3rd series) #30). Using the Vibranium sample, MacLain attempted to combine 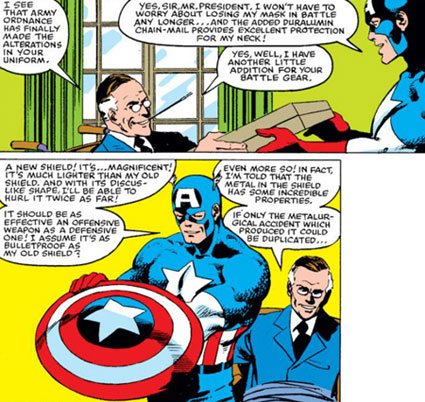 it with a highly-durable steel alloy he had been working on. Unsuccessful and exhausted, MacLain fell asleep at his work bench only to awaken hours later and discover the alloys had combined on their own. An x-factor somehow entered the process while he slept, forging the new metal but leaving MacLain unable to duplicate the process no matter how he tried. MacLain cast the new metal into a disk-shaped mold (based on the hatch lid to a tank), and Captain America’s shield was born.

Myron MacLain would spend decades attempting to recreate the happy accident that resulted in the shield. His best efforts would only create the inferior, but still nigh-unbreakable, alloy known as Adamantium. (Although it hasn’t been addressed directly, the sliding time scale for the Marvel Universe will probably retcon Adamantium’s creation at some point, changing things so that “Myron MacLain III” created Adamantium in modern times based on his grandfather’s notes on his WWII experiments.) To differentiate the two, Captain America’s shield has occasionally been retroactively referred to as Proto-Adamantium, while MacLain’s later creation is referred to as True Adamantium. Despite the name (and certain erroneous accounts from early OHOTMU volumes), the shield does not contain any True Adamantium, or Adamantium of any other kind, only steel and vibranium, as confirmed in Avengers Annual 2001. The formula that creates Adamantium was not discovered by MacLain until his later efforts to recreate the shield’s unique properties. 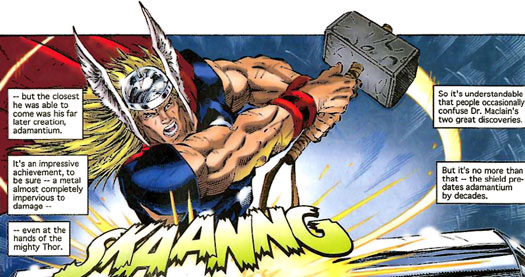