True Adamantium is forged through the bonding of two liquid chemical resins at temperatures greater than 1500 F. These resins were identified as Adamantium Resin X and Y in Avengers (1st series) #201-202, and Adamantium Resin A and B in Avengers (3rd series) #21-22, but otherwise have no official names. Once mixed together, the resins remain fluid and malleable for eight minutes before their molecular structures fully settle and harden into an unbreakable metal form. When Adamantium is fully cooled, it remains set in that shape indefinitely, even when exposed to temperatures over one thousand times higher than the temperature at which it is molded.

True Adamantium is extremely difficult to create, due to both the scarcity of the exotic materials and technical requirements in the forging process itself. Over time, however, many writers in the Marvel Universe began bending the rules when it came to Adamantium’s two most prominent features: that it was both rare and unbreakable. The destruction of Adamantium constructs by the likes of Thor or Hulk was perhaps acceptable, but Wonder Man? Blastaar? Furthermore, Adamantium began to turn up everywhere, from disposable weapons used by glorified cat burglars like the Bombardiers, to Alicia Masters’ studio and sculptures, to an Adamantium chair built for the Hulk by the Defenders. The biggest violator of the rules (literally) was FAUST (Fully-Automated Unit of Structural Technology)…a whole engineering factory and super-computer composed entirely out of Adamantium.

In X-Men (2nd series) #191, Serafina from the Children of the Vault claimed that Adamantium has thirteen allotropic forms, most of which are short-lived and extremely virulent. It’s possible that one of these allotropic forms is the Soviet-designed alloy known as Carbonadium. First referenced in X-Men (2nd series) #5 as “a more malleable form of Adamantium,” Carbonadium was created during the Cold War by the USSR for their Super-Soldier Program. Allegedly an inferior effort to duplicate the formula for True Adamantium, Carbonadium is cheaper to produce and not as strong. (How it compares to Secondary Adamantium is unknown.) Nevertheless, Carbonadium is still tremendously durable and also far more flexible than True Adamantium, allowing for the creation of Omega Red’s elastic and snake-like coils made of pure Carbonadium. 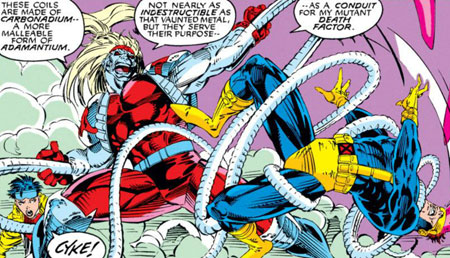 The greatest drawback of Carbonadium, however, is that it is radioactive. Bullets made of Carbonadium substantially slowed Wolverine’s healing factor with their radioactivity. If not for the lifeforce replenishing effect of his death factor, Omega Red would have died of radiation poisoning from his Carbonadium implants years ago. The Carbonadium Synthesizer is a device used to create the alloy, and allegedly would stabilize the Carbonadium in Red’s body. Whether it could neutralize Carbonadium’s radiation in all circumstances or merely in Omega Red’s particular case is unknown.