Several other examples of the Adamantium bonding process have appeared over the years. Romulus orchestrated the transformation of Silas Burr into Cyber as a prototype experiment for the bonding process before it was used on Logan.

Burr did not have Logan’s extreme regenerative powers, so instead of his bones the Adamantium was bonded to his skin, creating an impenetrable outer casing around his body, as shown in Wolverine: Origins #32. After Cyber died and returned to life by possessing a new body, he repeated the bonding process on his new host, employing the criminal scientist the Tinkerer to facilitate the procedure in Wolverine: Origins #12-13. A similar experiment was performed on Weapon Y, codenamed Citadel, who first appeared in Wolverine: First Class #5. Like Bullseye, however, Citadel was apparently not molecularly bonded to his Adamantium skin. Instead, his skin was surgically fused to an outer armor of Adamantium. 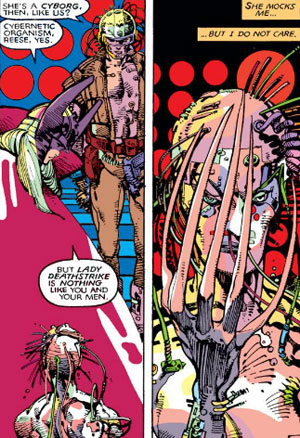 Lady Deathstrike apparently recreated a version of her father’s procedure during her own cybernetic enhancements in Uncanny X-Men (1st series) #205. Because these enhancements were overseen by Spiral in her Body Shoppe, however, the normal rules of the bonding process may not apply. Yuriko is, in essence, a “magic cyborg.” This is likely the explanation for Deathstrike’s otherwise unique applications: in addition to Adamantium-bonded bones, she also demonstrates retractable Adamantium fingernails that can somehow extend several feet in length despite the typical unalterable qualities of the metal.

The Facility apparently recovered notes on the Adamantium bonding process through their spies inside the Weapon X Project. In X-23 (1st series) #2, they selectively used the procedure on Wolverine’s female clone, X-23. Instead of a full skeleton, only X-23’s six claws were bonded to the unbreakable metal.

The Weapon X Program’s notes were also bought on the black market by RoXXon Oil’s Blackguard group to create a team of Adamantium Men mercenaries in Wolverine: Weapon X #1. Blackguard used nano-tech based implants to create a healing factor for their soldiers so they could survive the bonding process. The Blackguard soldiers also possessed retractable Adamantium claws based on Wolverine’s, further charged by laser energy implants.

Finally, the Tinkerer applied the basic principles of Darkwind’s bonding process to fuse Daken’s third claws with the “metal” of the Muramasa blade in Wolverine: Origins #34. Although not real composed of metal, but rather a form of psychoplasmic energy, the Muramasa blade still responded like metal enough for Tinkerer to melt it down and then bond it to Daken. These claws were eventually forcibly extracted from Daken’s body and hidden away by Wolverine in Wolverine: Origins #48.