The Adamantium bonding process is a method by which the metal can be bonded to a set of bones, giving someone a virtually unbreakable skeleton. The work is attributed to Kenji Oyama, Lord Darkwind of Japan, and was famously used on Wolverine, although not by Darkwind himself. 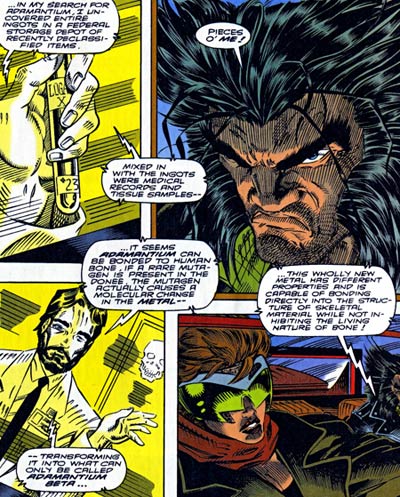 The procedure involves maintaining Adamantium in its liquid state, and then using surgical shunts to flood the still super-heated liquid metal into a subject’s body. As the Adamantium is surgically guided over the subject’s bones, it cools and hardens until it bonds with the skeletal structure at the molecular level. When the Adamantium fully sets, it is as if the subject’s bones were replaced with the super-metal, giving them a permanent, unbreakable Adamantium skeleton. This version of the metal was referred to as Adamantium Beta in Wolverine (2nd series) #80, because it has somehow altered during the process to not impede the normal permeability of bone, while still being unbreakable. Reports that Adamantium Beta is therefore less resistant than True Adamantium, however, are unfounded. 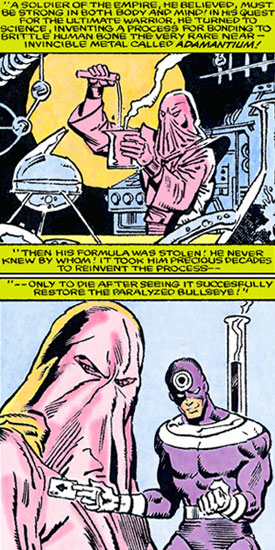 The timeline for Lord Darkwind’s theories requires a little examination. As previously mentioned, Adamantium was supposedly unveiled for the first time in Avengers (1st series) #66. Years later, Wolverine debuted with his Adamantium bones and claws in Incredible Hulk (2nd series) #181. Logan’s origin in the Weapon X Program, however, is confirmed by several sources to take place prior to Fantastic Four (1st series) #1, and the start of the modern Marvel Universe (and, therefore, the Avengers). Furthermore, the Soviets were working to create Carbonadium, a derivative of Adamantium, as far back as 1963. As an explanation, MacLain must have worked on the Adamantium formula for many, many years before giving it its public debut in Avengers (1st series) #66. The United States military and government would have performed countless tests, revisions and evaluations on the “miracle alloy” before showing it off to civilians, even civilian specialists like the Avengers. Lord Darkwind must have become aware of Adamantium and its unique properties at some point during its development in order to form his own theories on its use.

Another irregularity comes from the comparison of the Adamantium bonding process applied to Wolverine, and Lord Darkwind’s own work applying Adamantium to the skeleton of the assassin known as Bullseye. The Weapon X Project considered Logan the perfect subject for the Adamantium bonding process. In fact, many accounts suggest Logan was ONLY able to survive the procedure in the first place because of his healing factor. Analysis of Adamantium Beta in Wolverine (2nd series) #80 indicated the procedure only worked due to an existing mutagen in the test subject, i.e. Logan’s healing factor. And yet Bullseye, an otherwise normal human being, supposedly went through the same process. Bullseye also does not suffer from the “Adamantium poisoning” condition that seems to afflict Wolverine every time he loses his powers. 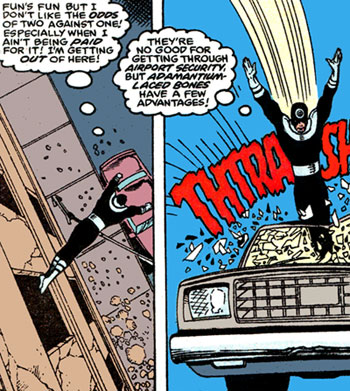 One possibility is that Darkwind understood his own work better than the thieves who stole his notes, and compensated for these problems. What seems more likely based on available evidence, however, is that Bullseye underwent a different process than Wolverine. In the years since his operation, Bullseye has still occasionally suffered from broken bones, indicating that his entire skeleton was not bonded with Adamantium. The process Wolverine underwent fused bones the Weapon X scientists didn't even know he had with Adamantium, so Bullseye could not have had the exact same procedure. Several references have been made to Bullseye receiving “strips” of Adamantium attached to his skeleton. This indicates the assassin underwent a more conventional form of medical procedure (akin to having a metal plate in your head) as opposed to the molecular bonding of metal to his bones that Wolverine did. To tie it all together, one can assume Lord Darkwind envisioned several kinds of Adamantium-based surgical procedures. Bullseye was subjected to a less-invasive form of surgery that merely affixed the metal to the outer surface of his bones, bracing and reinforcing them internally. Darkwind also theorized of a second procedure that would actually bond metal to bone, but never applied his theories because he couldn’t conceive of a man strong enough to survive the process.