Adamantium was first identified on-panel in Avengers (1st series) #66, where Dr. Myron MacLain unveiled his “new” creation (see below) to the Avengers. As a test of the metal’s mettle, the Avengers’ most powerful members turned their strength against it. Iron Man’s repulsor blasts at peak output didn’t even scratch the material, and a Class 100 strength blow from the Mighty Mjolnir left it scarcely dented. 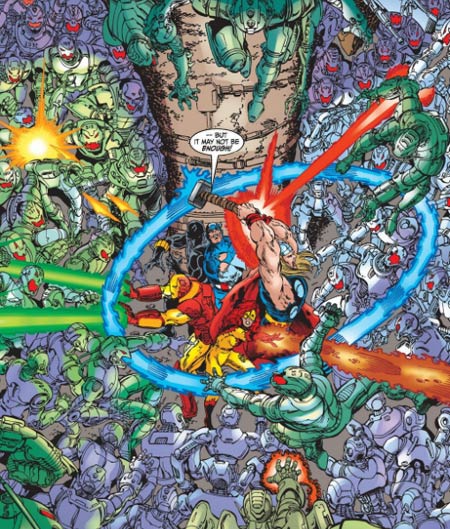 Naturally, it was almost immediately stolen by Ultron. This was Ultron’s first resurrection: his original confrontation with the Avengers was as Ultron-5, and Ultron-6 was the first time he was constructed out of Adamantium. Ultron-7 was a towering giant, and it’s unlikely such a massive frame was composed of True Adamantium, but the subsequent Ultron-8 through Ultron-17 (all appearances between Avengers (1st series) #162 and Avengers: The Ultron Imperative #1) were definitely forged from that unbreakable metal. In Avengers (3rd series) #21-22, Ultron constructed several thousand duplicate bodies for himself, variably composed of titanium steel, Secondary Adamantium and a scarce few of True Adamantium. Although Ultron did not use Adamantium in the construction of his first bride, Jocasta, the second bride Alkhema (aka War Toy) was composed of True Adamantium like her “husband,” and continued using it in her later bodies as well.

Ultron and Alkhema’s mobility is completely dependent on an internal molecular rearranger. Because Adamantium is totally rigid after it settles, a humanoid body composed of the alloy would be impossible to move under normal conditions without leaving exploitable gaps in the armor plating that would accommodate movement systems. Therefore, Ultron uses a molecular rearranger keyed to his internal systems that reshapes the Adamantium of his body moment by moment as he moves. This allows Ultron to employ a solid shell of Adamantium surrounding his entire body that is virtually impossible to penetrate or damage. Each molecular rearranger is specially keyed to the molecular structure of each batch of Adamantium as it forms, making them very rare and unable to affect the molecules or any other structure, Adamantium or otherwise. 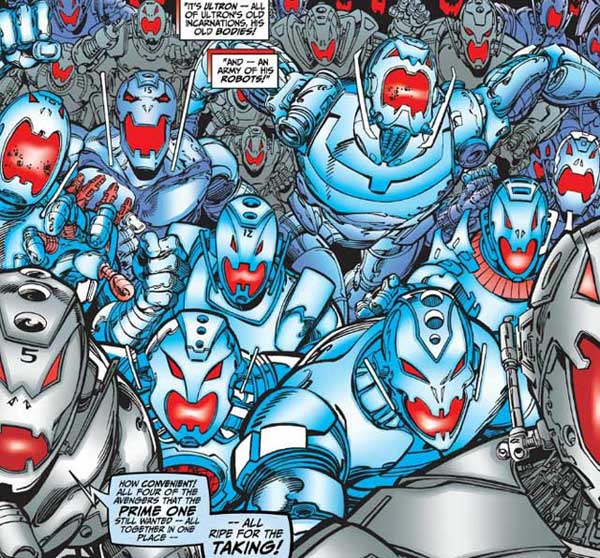