Once True Adamantium is set, only a few things on Earth are confirmed to be able to affect it. The U.S. government employs a specially-focused set of particle beams to cut Adamantium after it sets, which uses up a great deal of power. A molecular rearranger can be used to reshape set Adamantium as well, or even destroy it entirely under a sustained barrage. This method was once used to destroy Doctor Octopus’s Adamantium arms in Lethal Foes of Spider-Man #1.

The Muramasa blade is a weapon introduced in Wolverine (3rd series) #40 able to cut through Adamantium. Muramasa is a possibly immortal Japanese warlord and blacksmith. Through a combination of sorcery and alchemy, he can forge blades out of the pain and darkness of a warrior’s own soul. Although it resembles metal, the Muramasa blade is actually a form of psychoplasmic energy shaped and honed to act like a sword. The blade can not only cut through Adamantium, the wounds it causes cannot be overcome by mutant healing abilities, making it the ultimate weapon in Romulus’s quest to name his successor. It is unclear whether all Muramasa blades have these properties, or if they just relate to the swordsmith’s greatest creation, the blade forged from Wolverine’s own pain and loss. 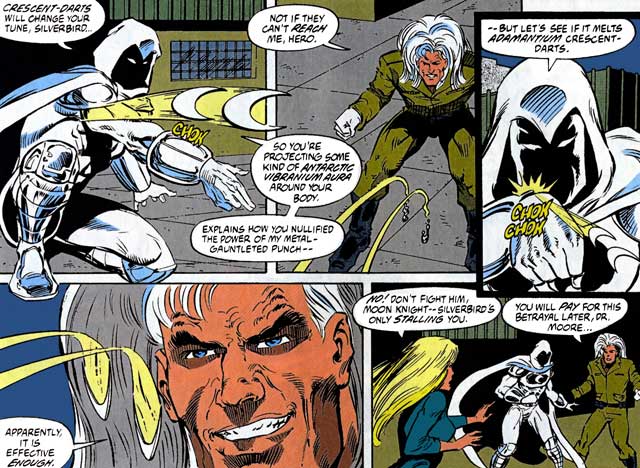 Another way of destroying Adamantium is through the use of Savage Land Vibranium. While the Wakandan Vibranium absorbs vibration, the Savage Land variety produces vibrations that break down the molecular integrity of metal. This “Anti-Metal” is potent enough to liquefy Adamantium. The first confirmed use of Savage Land Vibranium against Adamantium was in Marc Spector: Moon Knight #51, although it’s likely Spector’s crescent darts were only made from Secondary Adamantium. In Avengers (3rd series) #22, Justice conceived of employing Anti-Metal against Ultron, and Giant-Man successfully pounded his creation into submission, using Anti-Metal cylinders in his bare fists to destroy Ultron’s True Adamantium exo-structure. 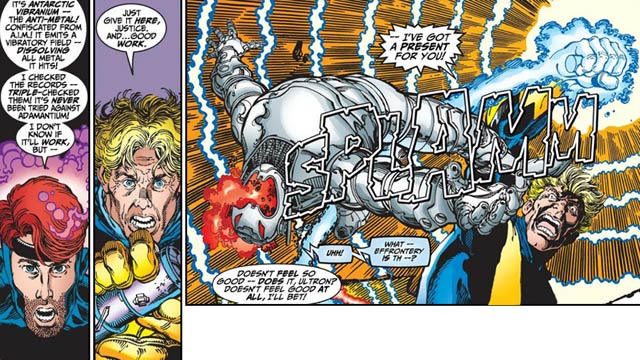 Attacks involving the so-called Wellspring of Power can directly affect Adamantium. The Wellspring of Power is a font of extra-dimensional radiation located in deep space that somehow permeates the fabric of reality. Many superhuman abilities and physics-defying properties of the Marvel Universe are derived through the Wellspring and its effects. Certain metahumans draw power directly from the Wellspring, such as the Squadron Sinister and the Folding Circle. 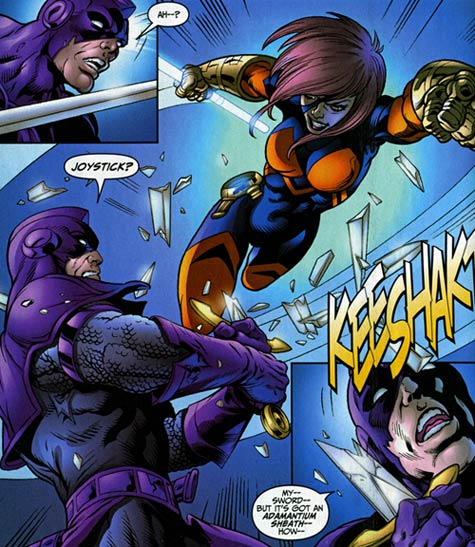 The Wellspring is also responsible for bending the laws of physics throughout the universe to allow exotic substances like Adamantium and Vibranium to manifest their unique properties. An attack that directly struck at the Wellspring’s energies could disrupt those same properties. When the Grandmaster empowered his champion Joystick with the ability to draw from the Wellspring during Thunderbolts (1st series) #102-109, she could not only render the Wellspring-based speedster Speed Demon powerless, but also shattered Swordsman’s Adamantium blade. This is because her energy clubs neutralized the Wellspring’s special properties that made Adamantium unbreakable in the first place.

Finally, by the year 3014, several substances have been discovered which are stronger than Adamantium. One such substance is Dargonite, and a bullet made from that metal pierced the Adamantium woven suit of Vance Astro in Guardians of the Galaxy (1st series) #18. (Based on its name and the date of its creation, the substance may be related to Dargo K’Tor, the Thor of the 26th century.)