SENTINELS - ENGINES OF EVIL: Page 6 of 9

Over the generations of Sentinel models, many aspects of the original design have evolved. While this is an automatic and unavoidable aspect of natural reproduction, it is only accomplished with machines via the adjustment and modification by humans. That is, until one of Bolivar Trask’s designs was left to operate on its own. Some time after the debut of Bolivar’s Sentinels, the designs of Trask’s 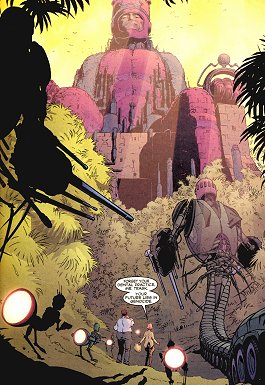 Master Mold unit had been acquired by some division or project funded by the US government, which used the blueprints to secretly build a Master Mold factory in the highlands of Ecuador. Just as did Bolivar, the group provided the Master Mold with an artificial intelligence. However, the intelligence of this unit was much different, as it was precision-engineered to adapt to its environment and programmed to build “Wild Sentinels,” using any and all technology within its radius. The result was a breed of Sentinels which more resembled small, two-legged dinosaurs. Some models displayed serpentine-like lower halves, and yet others resembled giant insects like spiders and locusts.

Just as secret as its construction, so too was its abandonment, for when the facility was finally discovered again it was empty, save for its Sentinel guardians. The reason behind this might have been a programming error that the government team had accidently copied from Bolivar’s schematics. When the entity known as Cassandra Nova discovered the facility, she had also learned that its guardians would only allow entry to someone with the DNA of a Trask - a design the US government would hardly have mandated. If this had been accidently copied into the Master Mold’s artificial intelligence, the first action of the facility might have been to slaughter all humans therein. After such an incident, the government division might have cut their losses, abandoning the project for good. 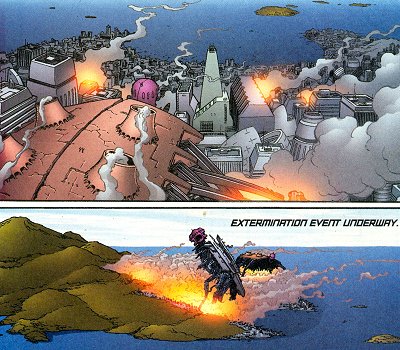 Having knowledge of this design flaw, Cassandra sought out and recruited Donald Trask, a nephew of Bolivar who lived in Albuquerque, happily running his dental practice. With Donald’s presence, Cassandra gained entrance into the facility and convinced him to order the Master Mold unit to construct two immense Mega-Sentinels, which they then sent to the island nation of Genosha. There, home to half of the world’s mutant population, the two Mega-Sentinels annihilated over sixteen million mutants. [New X-Men (1st series) #114-115] Once the assault was completed, it seems that the two Sentinels simply shut down, possibly for the straightforward reason that they had no further orders. One of the two fell into the ocean, submerging beneath its waves and was forgotten. The other settled into the center of the ruins of the capital city, in what was once known as Magda Square. 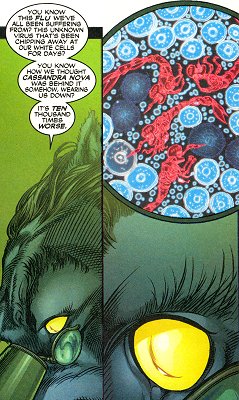 However, the Mega-Sentinels were only the first part in Cassandra Nova’s plan. In contrast to the Mega-Sentinels, Cassandra instructed the Master Mold to build microscopic Nano-Sentinels, which she injected into her own bloodstream. A short while later, once Cyclops and Wolverine arrived, Cassandra allowed herself to be defeated and captured, in order to be taken to the X-Men’s mansion for study. There, right beneath the noses of the X-Men, Cassandra telepathically switched minds with Xavier, after which she shot her own body (now hosting Xavier's mind). [New X-Men (1st series) #116] The infected blood which spattered from her wounds in turn infected the X-Men with Nano-Sentinels, which began to attack their white blood cells, leading to various colds and ailments. Ultimately, the X-Men were saved by their newest recruit, the enigmatic Xorn, who used his apparent powers of healing to deactivate the Nano-Sentinels. [New X-Men (1st series) #123, 126] Though narrowly ended by their threat, the X-Men nevertheless extracted and retained a number of the microscopic robots, presumably for further study.

A couple of weeks later, the X-Men traveled to the ruined Genosha to review the extent of the damages. To their surprise, they discovered that the a few survivors of the initial attack had been joined by other mutants who had taken up residence in the ruins. Working together, some of them were in the process of re-shaping one of the heads of the Mega-Sentinel into a monument to Magneto, who had ruled the island nation during the time of the attack, and who was believed to have been killed by the Sentinels. Having been present during the incident herself, Polaris used her magnetic powers to complete the reshaping of the Sentinel. Later on, when Xavier decided to take an active role in the rebuilding of Genosha, Polaris re-constructed the monument, this time making it a statue of both Magneto and Xavier. [New X-Men (1st series) #132, Uncanny X-Men #442-443]

With the deactivation of both the Mega- and the Nano-Sentinels, it seemed that the threat of the Wild Sentinels factory and its creations was over, as no doubt Wolverine and Cyclops had destroyed the Master Mold in Ecuador following the capture of Cassandra Nova. However, not all of the Wild Sentinels had been destroyed and, without a Master Mold to guide their activities, these Sentinels utilized their own animal-level artificial intelligence as they organized themselves in packs. One group of insectoid Wild Sentinels had built themselves an underground hive near an Ecuadorian village mostly inhabited by mutants. Also capable of creating more Wild Sentinels in their own shape, they waited until their pack had grown to a significant number before attacking the village. The people living there radioed for help but, by the time the American Sentinel Squad O*N*E arrived to answer the distress call, most of them were already dead. The Sentinel pilots managed to destroy their ‘wild” counterparts almost without effort, saving at least the children of the village, who had been hidden in the basement of the local church. [Sentinel Squad O*N*E #5] 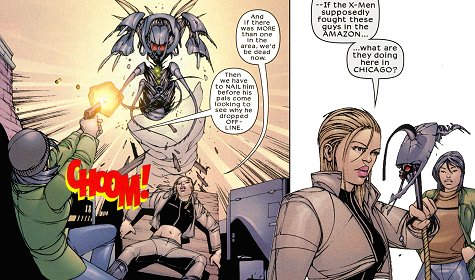 Another pack of Wild Sentinels made its way through the jungle, until it came upon and commandeered the freighter Amazon Belle. Sailing up the South and North American coasts, the ship eventually made its way into Lake Huron and then Lake Michigan, finally coming ashore in Chicago. Having homed in on several mutants and seeking to fulfill their directive, the Wild Sentinels were stopped after being confronted by Kitty Pryde, Karma and the Genoshan mutant Shola Inkosi. Together, the trio was able to obliterate presumably what was the last of the Wild Sentinels. [Mekanix #1-6]

Not long after Kitty Pryde rejoined the X-Men, the team was forced to return to Genosha once again, seeking to protect Professor Xavier. Recent odd occurrences in the Danger Room had led to the revelation that it had gained sentience years before - after the installation of Shi’ar technology.

Now furious with he who had enslaved it for so long, “Danger,” as the entity came to be called, journeyed to Genosha, where Xavier and the X-Men seemingly destroyed it. However, in truth, Danger had simply downloaded its consciousness into the Mega-Sentinel which had lain inert on the ocean floor. Curiously, during the time since the attack, the Mega-Sentinel had become self-aware and it had been necessary for Danger to suppress its memory of the attack. However, when Kitty Pryde managed to convince it to unlock this memory, the Mega-Sentinel turned on Danger and elected to leave the Earth, needing to spend time alone to confront the genocide in which it had taken part. [Astonishing X-Men (3rd series) #11-12]

Though it had left the planet, the Mega-Sentinel did not go far, as it was nearby when the heroes of Earth learned of an impending and approaching threat. A gigantic bullet fired by the people of the Breakworld had been aimed directly for the Earth. When it was surmised that only a direct, head-to-head hit by something might be enough to divert it, the Mega-Sentinel volunteered for the suicide mission. It explained that it had come to understand what life meant and hoped that it might help. Unfortunately, the Mega-Sentinel’s sacrifice was in vain and it was obliterated without impeding the bullet at all. Luckily, the threat of the bullet was later averted by Shadowcat, who phased the projectile safely through the Earth. [Giant-Sized Astonishing X-Men #1]

Some months later, the X-Men's sample of the Nano-Sentinels was apparently stolen and ended up being used against them. During a rather tumultuous time, when the X-Men and several other parties raced to find and recover the first mutant baby born after M-Day, the Sentinels operated by the US government’s Office of National Emergency (abbreviated by some as O*N*E) suddenly turned on and attacked the X-Men and the students of the Xavier Institute. Ostensibly present to protect the world’s remaining mutants from attack, these Sentinels’ controls were instead usurped by their nano 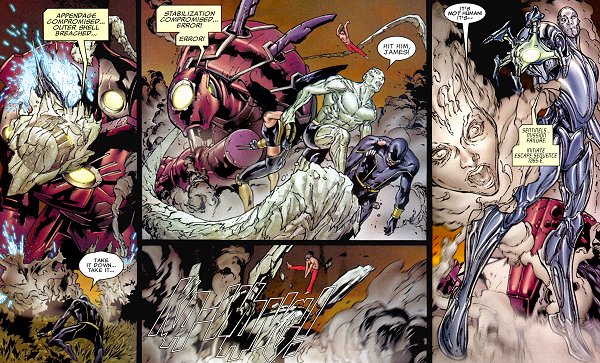 counterparts. Though the X-Men were able to destroy these units, one entity - possibly a humanoid amalgamation of the Nano-Sentinels - emerged from the wreckage and escaped. [X-Men (2nd series) #205, Uncanny X-Men #493] While the X-Men suspected the culprit behind the incident to be Cable, who had been operating counter to the interest of the X-Men during the crisis, they never learned for certain who has behind the incident.