SENTINELS - ENGINES OF EVIL: Page 2 of 9 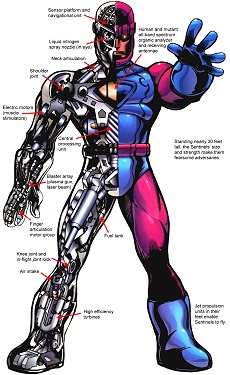 Having been in college at the time, studying engineering, Larry Trask wrongly blamed the X-Men and all mutants in general for his father's death and picked up where Bolivar left off. He rebuilt and improved the Sentinels, adding more weapons and 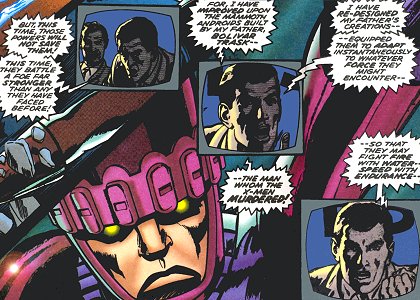 features to the mutant-hunting robots so that they could adapt instantly to whatever force they would be attacked with. To ensure that they would not rebel against humanity again, Larry designed an interface helmet with which he could assume control of any Sentinel and override all other commands, if necessary. Still, once set in motion, the Sentinels mostly followed their own built-in system of logic. Without Larry Trask ordering them to do so, it was the Sentinels themselves who decided to create a hidden mountain base in upstate New York, including a chamber full of stasis tubes to store the mutants they would eventually capture.

Larry was aided in his quest against mutants by a friend of a Trask family, a federal judge named Chalmers. While Larry Trask further studied the Sentinels and marveled at the inventiveness and resourcefulness of his creations, Judge Chalmers founded the Federal Council on Mutant Activities. Even though Chalmers was not as convinced of mutants being a menace, he agreed to the Sentinels being launched. The robots proved to be very effective, singling out opponents and adapting to their powers, and before long they had captured most of the known mutants at the time, both heroes and villains alike. In his mad quest for revenge, Larry eventually ordered the Sentinels to destroy all mutants; which was one step too far for judge Chalmers. He had wanted the prisoners to be treated humanely and for their powers to be removed, but he wouldn't condone to murder.

Knowing the dark secret of the Trasks, Chalmers removed the medallion from Larry's neck, with the Sentinels in the base immediately recognizing him for the mutant he was, as such no longer following his orders. 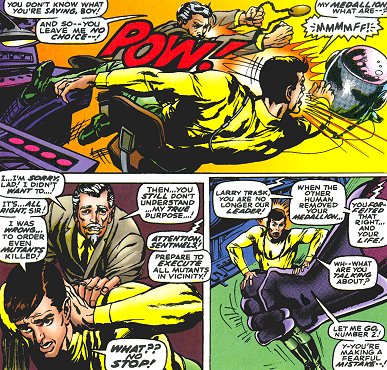 The last command having been the destruction of all mutants, Judge Chalmers now feared that he had caused the death of his friend, when the remaining X-Men arrived. Hopelessly outnumbers by the Sentinels, Cyclops, Marvel Girl and the Beast knew that they could only defeat the mutant-hunting robots with logic. Trading costumes with the previously captured Quicksilver, Scarlet Witch and the Toad, the three mutants were able to confuse the robots long enough for one of them to reach the center of the base. Once there, Cyclops argued with the Sentinels about the source of all mutation. Computing that the sun was the source of most mutation-inducing radiation on Earth, the Sentinels abandoned their current activities and departed to space to find a means to destroy the sun. [X-Men (1st series) #57-59] Following their departure, the captive mutants were all set free and Judge Chalmers placed the power-suppressing amulet around Larry Trask's neck once more, making him forget everything that had happened.

Four weeks later, there was again movement in the abandoned Sentinel base. Each of them beyond their capability of self-repair, the remains of five Sentinels who were damaged during the 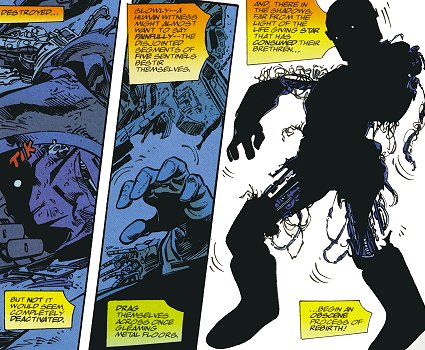 conflict with the X-Men merged together, forming one functioning robot. It left the compromised headquarters and set a random flight pattern, eventually registering mutant activity in Dunfee, Illinois. The energy signature belonged to a young girl named Ashlee Martin, who had barely begun to manifest her ability to control technology. Not yet fully intact, the Sentinel obeyed to the commands of the young girl, who had no idea what a Sentinel truly was and hid him in the barn behind her mother's house. When Professor Xavier and the Beast later arrived, also investigating the emergence of a powerful mutant signature, their presence triggered the Sentinel's programming. Still obeying the last accepted order of Larry Trask, the robot tried to kill the three mutants present. Fortunately, though, Ashley caused the robot to fall apart, rendering it harmless. [X-Men: Hidden Years #8-11]

Around the same time, the other Sentinels were still orbiting around the sun. Number Two, the leader of this pack of Sentinels even flew so close to the sun that his hide began to melt. Additionally, his systems were altered on a molecular level, with Number Two somehow gaining the power to open teleportational gates. Once the Sentinels realized that they lacked the means to destroy the sun, they came up with another plan to end the mutant threat. As they couldn't end the cause of mutant births in general, they saw no other way but to control each single birth that occurred. In order to do so, they retreated to a secondary base they had built under Trask's supervision, located somewhere in the Australian Outback and resembling a giant ant-hill. 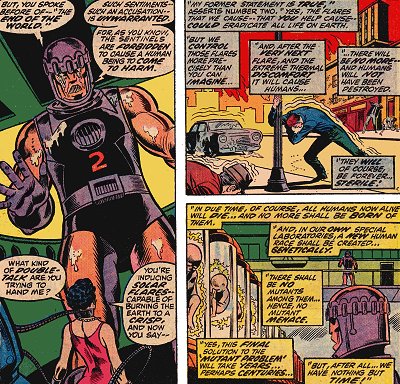 There, the Sentinels built a device that would increase solar flare activity up to a point where it would not kill humanity but render them sterile. Afterwards, the giant robots planned to genetically create a new human race in their labs – not caring whether the task would take a few years or even centuries. Their device needed a single mutant for a power source and for technical reasons this mutant needed to be female. As the address of the Avengers' headquarters was publicly known, Number Two ordered his followers to go after the Scarlet Witch rather than Marvel Girl. Taken by surprise and unfamiliar with the ever-adapting robots, the Avengers found themselves unable to do anything, as one of the Sentinels escaped through Number Two's warpgates with the captured Witch in his grip.

Remembering Larry Trask from the earlier incident, Quicksilver tracked the man to the house of Judge Chalmers and kidnapped him to question him on the Sentinels whereabouts. Still amnesiac, Larry had no idea what the Avenger was talking about, until the speedster sensed the weakening effect emanating from the medallion around his prisoner's neck. Once ripped off, Larry's memories of the Sentinels' Australian base returned, but so did his precognitive visions. In his mind, he saw the Sentinels carrying out their mad plan and then nothing but a black void. After making their way to Australia, the Avengers had to fight numerous Sentinels, keeping them from reaching the lower levels of the base where the Scarlet Witch was held. Lurking around, Larry recognized that the mutant energy detector in the command room was switched off, which he considered odd. When Trask turned the detector on, it bathed every mutant in close proximity in a glowing light. Other than Larry himself and the Scarlet Witch, the Sentinel Number Two also went aglow – the flight around the sun having altered his make-up so much that he now qualified as a mutant.

Immediately the other three remaining Sentinels turned on their leader, obliterating Number Two with their in-built lasers and ray guns. Apparently still connected to Number Two in some way, the Sentinels abruptly deactivated themselves right afterwards instead of carrying on the fight and their plan to render humanity sterile. Unfortunately, 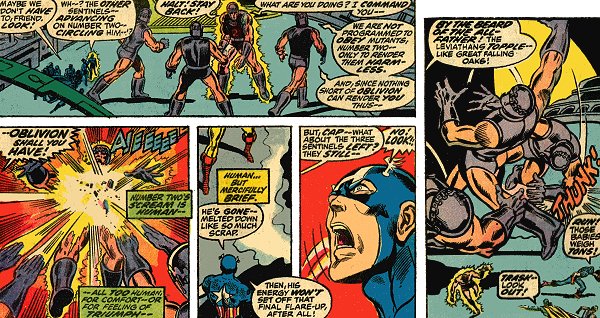 Larry Trask was too close by, and he was crushed underneath one of the giant robots when it toppled over. The visions he had experienced before were nothing but a holographic simulation of the Sentinels' plan and his own death. Their kidnapped teammate freed, the Avengers caused a cave-in to seal off the entrance to the anthill, before returning home. [Avengers (1st series) #102-104]

Still, this was not the last of the Mark II Sentinels as some of Larry Trask's notes remained in the possession of Judge Chalmers. While the old man had no intention to continue the feud that had cost both Trasks their lives, years later his daughter, Cythia, took a special interest in the documents 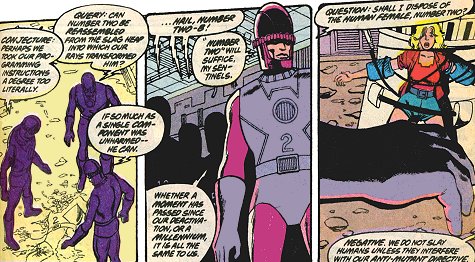 after she had been diagnosed with a fatal form of cancer. Using her background as an archeologist, she led an expedition to the ant-hill in Australia and had her workers dig free the entrance to the base underneath. The intrusion of Cynthia and her men caused the three Sentinels to re-awaken. Discussing their status, the three robots decided that they had taken their programming a bit too literally when they obliterated Number Two, and they proceeded to re-assemble their fallen leader from the slag heap into which they had transformed him.

After Number Two was fully repaired, the Sentinels left the anthill and took over a solar observatory in New South Wales. All of the four Sentinels expressed some odd behavior, such as asking each other for forgiveness or voicing doubts. However, while they recognized these incidents as violations of their initial programming, they didn't consider them important enough to further explore, instead blaming the long deactivation period for these malfunctions. Number Two once more planned to render humanity sterile, though this time he wanted to use gamma radiation to increase solar flare activity. The robots built a similar device to the one before and, needing two gamma-beings to act as a power source, they kidnapped the Abomination and Dr. Leonard Samson. Cruelly, Number Two and the other three Sentinels used the scientists working at the observatory as guinea pigs, testing on them at what dosage of gamma radiation they were rendered sterile and at which point they died.

While checking out the report of Sentinel activity, the X-Men ran into Cynthia Chalmers, who provided the mutants with the location of the new Sentinel base. As soon as they arrived there, a fight erupted between Sentinels, the Abomination and the assembled heroes. Having fought these and even more advanced Sentinels before, the X-Men quickly overcame three of the Sentinels. However, during the battle, the Abomination caused a miniature earthquake that created a fissure into which both he and Number Two fell, before closing on top of them again. Believing both of them dead, the heroes departed, leaving Cynthia Chalmers behind at the observatory. As such she was the sole witness of the Abomination's survival, as he dug himself back to the surface, with Number Two's severed head in tow. At that point, Cynthia proposed to the villain an alliance, revealing that she possessed the blueprints of the Sentinels, as well as the means to properly control them. Claiming to be a mutant-hater, Cynthia told the Abomination that she was dying of cancer soon, and promised that he could use the Sentinels in whatever ways he wanted, once she had gotten her last wish - the X-Men's death.

Over the next weeks, the Abomination helped Cynthia to build a re-designed Sentinel out of the remains of the four robots that he and the X-Men had defeated before. Additionally, they constructed a device to remote-control the giant robot, or so the Abomination was led to believe. Actually though, 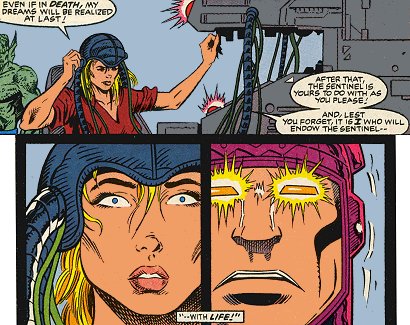 Cynthia wanted to upload her own consciousness into the Sentinel to escape her imminent death and to live on, even if it was as a machine. However, she made the same error as the Trask's underestimating the Sentinels' determination to their original task. When she uploaded her mind into the robot, the Sentinel's programming remained dominant, immediately resuming Number Two's earlier plan. As Dr. Samson had left Australia in the meantime, Number Two captured Rogue to serve as the solar flare machine's second power source, her body still retaining some gamma radiation as she had absorbed Samson's strength earlier on. Once again, the X-Men managed to save the day, partially due to Psylocke mentally stabilizing Cynthia's persona inside the robot's mind. Knowing that she couldn't keep the Sentinel routines from merging with her own mentality, and hating what she had become, Cynthia made the Sentinel fly straight into the sun, ending its and her own existence. [Marvel Super-Heroes (2nd series) #6-8]