SENTINELS - ENGINES OF EVIL: Page 3 of 9

Several months after the Avengers' battle against the rogue Sentinels, the US government chose one Dr. Steven Lang to spearhead a US governmental task force to determine why mutants exist. Not much is known about the early life of Dr. Lang, but his new position as project head allowed him access to the estate of Larry Trask, which in turn granted him access to the notes and blueprints of Bolivar and Larry Trask’s Sentinels. After reading Larry Trask’s notes, Lang became convinced that mutants were a threat to the whole of humanity.

In a manner unclear, he soon thereafter became involved with a secret, shadow organization called the Council of the Chosen, the prestigious Inner Circle of the Hellfire Club, a group of wealthy industrialists who longed to somehow use mutants as tools to enhance their power and influence. It was they who provided the money and material Lang needed to fund a new program, which was named Project: Armageddon. [X-Men (1st series) #100] However, even from the beginning, 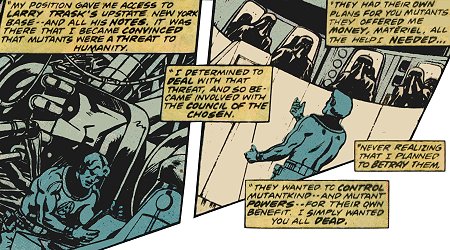 Lang plotted to betray his benefactors as he meant to exterminate all mutants rather than let them be used by the Council of the Chosen. In fact, the members of said Council were not all of the same opinion, as one of their number, Ned Buckman, shared Lang's views and secretly supported him.

Working at the behest of Sebastian Shaw, the then-uncrowned Black King of the Council of the Chosen, a Colonel Rossi was sent to Project: Armageddon to meet with Steven Lang. Upon learning the true nature of the project's goals, Rossi left for Washington DC, only to have his aircraft be attacked and downed by Sentinels. Recovered by Shaw’s people, Col. Rossi was taken to Shaw’s beach house in the Hamptons and guarded by Emma Frost, who would one day hold the title of the White Queen. By the time Emma was able to use her mental powers to learn what the now-unconscious Rossi had learned and telepathically inform Sebastian, she and Rossi were attacked by yet another Sentinel, sent by Lang to finish the job. It was only by the timely arrival of Shaw himself and some of his mutant allies that the Sentinel was destroyed. Returning to the Hellfire Club, Shaw used Emma’s telepathy to cause Buckman to gun down the Council of the Chosen, leaving Shaw to finish Buckman himself. Shaw then took over the Council, replacing it with a Lords Cardinal, comprised of mutants, who would rule first the Hellfire Club… and then the world. [X-Men (1st series) #96, Classic X-Men #7]

Unaware or uncaring of his role in the takeover of his benefactors’ organization by mutants, Steven Lang continued with his plans for Project: Armageddon. Rather than placing the project’s main facility anywhere on Earth, it was positioned in Earth’s orbit. Having recently been abandoned due to budget cuts, Lang’s project took residence upon SHIELD’s orbital platform. Therein, Lang used technology undeniably derived from the work of Bolivar Trask, and possibly from the improved models of Larry Trask. Lang's staff, a group of scientists and robotic engineers, not only constructed the third Generation of Sentinels but they also further studied all available data on the mutants they would have to encounter. 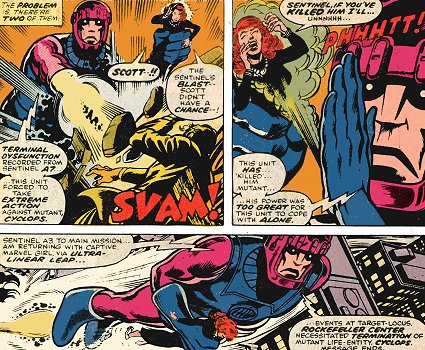 Reasoning that the X-Men embodied the heart and spirit of mutantkind, Steven Lang chose them to be the first targets of his Sentinels. At Christmas time, the giant robots attacked the mutants during a shopping trip to New York, applying a “divide and conquer” tactic. Rather than battle all of the X-Men in the area, the Sentinels would attack only some of them and make their escape as soon as they had captured one of the mutants, to securely stash them away in the orbital facility's holding area. Robbed of half of their number, it took the remaining X-Men several days to locate the Sentinels' base and to find a means to get there.

Once the X-Men made their way aboard the orbital station, Lang pitted his latest creation against them, the so-called X-Sentinels. These robots were designed to be so human-like that they could pass for the people they were attempting to mimic. Arguably, Lang had a sadistic streak, as he apparently had built these X-Sentinels to make the X-Men believe their friends and former teammates had turned against them. However, they

couldn't fool Wolverine's keen senses for long and in the fight that followed, the orbital station became damaged. As the X-Men and the station’s personnel fled, Lang boarded a small, flying gunship, intent on destroying the X-Men himself. However, a well-aimed optic blast from Cyclops jammed the craft’s controls, causing him to crash and seemingly perish. [X-Men (1st series) #98-100] 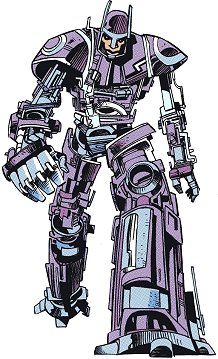 Despite being believed so, Steven Lang was not yet dead. Witnessing that neither his Mark III Sentinels nor his new X-Sentinels were a match for the X-Men, Lang sought to activate the Master Mold unit. However, his own design for the Master Mold unit had differed too far from that of Bolivar Trask’s and the process of a mental connection for the two left Lang a mindless shell, while copying his personality and memory engrams into the Master Mold itself. Now activated and with the mind of Steven Lang, the Master Mold fled the facility to carry on its directives. More information on this Master Mold unit's activities can be found [here].