Built on a sprawling estate in the 1700’s by a Dutch ancestor of Charles Xavier’s, the mansion was originally built from stone on the edge of Breakstone Lake. Over the years, it has been destroyed on several occasions, but each time rebuilt and updated (to include advanced technology from the Shi‘ar Empire), using the format and style of the original, until recently, when the mansion was rebuilt with an entirely new design. 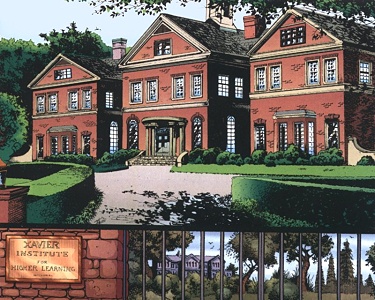 Originally passing to the public as the Xavier School for Gifted Youngsters, when the majority of X-Men no longer were “youngsters“ the school was renamed to Xavier Institute for Higher Learning. As home to the X-Men, the Institute is often referred to as the “X-Men mansion“ or even “X-mansion”. It is located three miles outside of Salem Center and some forty miles outside of New York City.

As already mentioned above, the mansion was destroyed several times and rebuilt, each time even better than before. This is supposed to be a brief overview of the occasions when the mansion was almost totally leveled, or when there were rather drastic changes to it.

Back in the early days, before Xavier had even recruited his first generation of X-Men, he was introduced to the mysterious time traveler, who called himself Cable. In exchange for teaching him how to get along in present day society, Cable helped the professor to upgrade the mansion with future technology, way ahead of its time. [Cable (1st series) #45] There were only very few villains who would attack the X-Men at their home and, other from the Juggernaut knocking a hole through one of the outer walls, there was hardly any real damage to the building.

Probably the first time that several floors and different sections of the mansion were destroyed was on a Christmas Eve, when Kitty Pryde was hunted by a N’Garai demon. Freshly joined, the inexperienced mutant teenager ran for her life and led the creature on a wild goose chase, Storm’s attic, the Danger Room and even the hanger bay all being trashed in the process. The mansion’s exterior, though, wasn’t harmed and, when Kitty’s parents arrived for a surprise visit, they wouldn’t even notice what had transpired there earlier that evening. [Uncanny X-Men #143]

The X-Men had barely finished making repairs when the house was almost entirely taken down by the alien Sidri. Only Storm and Cyclops present at the moment, they were hopelessly outnumbered and were lucky to stay alive. There was nothing they could have down to keep the house intact. [Uncanny X-Men #154] 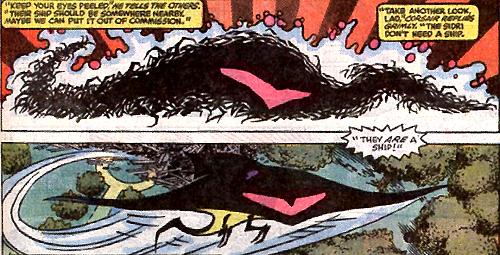 For a brief time, the X-Men re-located their base of operations to an island in the Bermuda Triangle that Magneto had been using as his headquarters before. In the meantime, the mansion was repaired and upgraded with Shi’ar technology, a gift from princess Lilandra to her lover, Charles Xavier. [Uncanny X-Men #163-164]

The next time the mansion was leveled was when it was blown up by Mr. Sinister at the end of Inferno. With Professor Xavier far away in outer space and the X-Men letting the world believe them dead,

the mansion was left as it was. The underground levels were still intact, but the security hatch leading to these areas was sealed shut so that nobody would exploit the equipment. [Uncanny X-Men #243, 254] The New Mutants were offered to live in X-Factor’s ship, which they did for a short while, though when Cable took over the group, they moved into these sub-areas underneath the ruins. [New Mutants (1st series) #90]

Only after Xavier returned to Earth, and the original five X-Men returned to the fold, was the mansion rebuilt. Forge’s mutant power to invent technology sure came in rather handy at the time. [X-Men (2nd series) #1]

The next time the mansion sustained some massive damage, Professor Xavier himself was the culprit, or actually his alter ego, Onslaught. However, despite there being gaping holes in the walls and floors all over the building, it was still inhabitable afterwards, and the repairs didn’t take as long as in those other incidents described above. [Onslaught: X-Men] 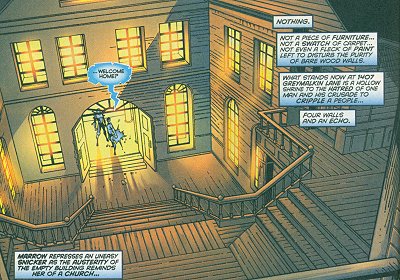 Something rather unique happened when Operation: Zero Tolerance had targeted the X-Men. With all the team either captured or busy fighting for their lives, Bastion had a special group of operatives strip the mansion bare of anything but the naked walls and floors. Their equipment, the furniture, personal belongings – all stolen. [X-Men (2nd series) #70] 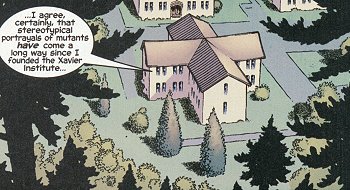 Some of the X-Men being rich and others having stashed away some money, eventually the missing property was replaced. After the school went public, and over one hundred new students enrolled, a new dorm building was erected. Rather appropriately, it was in the shape of the letter X. [New X-Men #122] The dorm didn’t survive for long, though, along with the rest of the mansion it was blown up by the Magneto imposter, who had been hiding among the X-Men behind the mask of Xorn. [New X-Men #147]

Following this disaster, Professor Xavier has turned his back on Westchester, and for a brief time it was not even sure whether the school would be re-opened. 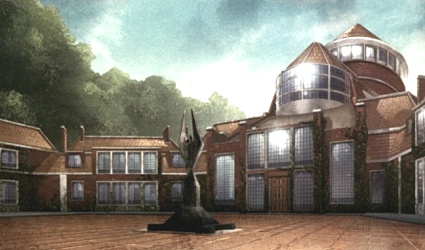 Fortunately, Emma Frost convinced her lover, Scott Summers, to run the Institute together with her. Under their eyes, a new mansion was built, this time no longer matching its predecessors in shape and design. It even seems to be the case that it’s been built on a different spot of the Xavier Estate, it now standing right beside the edge of the Breakstone Lake. The new mansion is much larger than the old one to accommodate for the high number of students attending the school. [Uncanny X-Men #444, Astonishing X-Men (3rd series) #1]