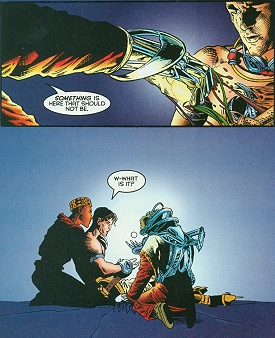 About a decade later the world was oppressed by the New Canaanites. In Eurasia a last sect of Askani were still alive. Madame Sanctity was their leader, but to the concern of novitiate Aliya, she was nearly mad. ‘Strator Umbridge was ordered by her superiors to prevent the Askani from finding their messiah, while Blaquesmith encouraged Nathan and his friend Tetherblood to search out the last Askani and receive training, after extract some glowing sphere out of his techno-organic body parts. The sphere was Professor.

Stryfe wanted to rule the world as Apocalypse’s heir and ordered his mentor Ch’vayre to activate the android Zero. Seeing how mad he became Ch’vayre finally tried to kill Stryfe, but he failed and Stryfe kept his mentor around to have someone to torment, though in the end he fully mindwiped him. 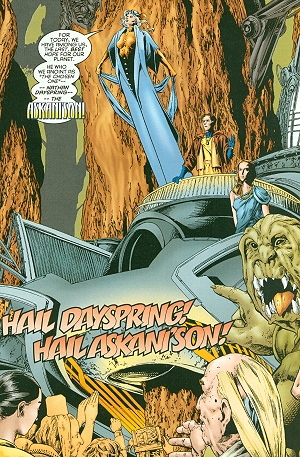 Months later Nathan finally reached his destination and was welcomed by Sanctity as the fabled Askani’Son. Neither he nor Aliya like the glorification, and confirmed their doubts when he told Nathan that not Sanctity but Aliya was destined to tutor him in Askani methods.

Finally having found the Askani location, Umbridge called in the Canaanite armada. Tetherblood helped Nathan and Aliya to get out of the battles alive. Sanctity fought the warships and was apparently killed, however Stryfe transported her onto his ship. Zero had advised him that she could tutor him and furthen his innate power. Recognizing the similarity to her messiah, she accepted and joined forces with Stryfe. [Askani‘Son #1-4]

Nathan Dayspring and his friends founded Clan Rebellion and opposed the Canaanite government wherever they could, however they had to fight both the Canaanites and Stryfe. During one occasion, Stryfe managed to place a traitor named Korless in Clan Rebellion. He lured Tetherblood and Professor into a trap, both ending up captive of Stryfe, who tortured the man and held the energy sphere in a bottle, knowing that it’s life-force was linked to that of Dayspring. Nathan then befell a strange illness, and Clan Rebellion saw only one option to save him. Aliya was sent to the 20th century, where she had to recruit the help of Cable and Domino. The future version of Dayspring and Domino helped Aliya to inspire the rebellion again, and they managed to free Tetherblood and the Professor. Soon Dayspring was feeling better and the time travelers returned home. Stryfe punished Korless for the failure. [Cable (1st series) #25]

Not much is known about the next twenty years, save that Nathan and Aliya married, and that she had a child named Tyler, who has been mentioned as adopted by Cable, so apparently he was not his biological father. Clan Rebellion grew, and later called itself Clan Chosen, counting Aliya’s sister Hope, another female named Dawnsilk, Adam Unit Eleven and Boak among their members. Stryfe’s forces had acquired some territory, and the battle fronts still were the same : Canaanites vs. Clan Chosen vs. Stryfe. 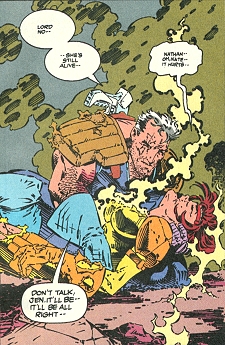 Finally one day, Clan Chosen were attacked by Stryfe’s troops and Jenskot, Aliya’s chosen name in honor of Phoenix and Cyclops, was caught in the explosion of a thermo-grenade. She died in her husband’s arms. Also Tyler was nowhere to be found, evidently captured by the rivaling forces. Later when Clan Rebellion attacked one of Stryfe’s bases, they were taken by surprise. Tyler, brainwashed to serve Stryfe, was holding Dawnsilk hostage, being in a neuro-link with her. Seeing no other chance to save her, Cable used his guns and separated the connecting wires, still Dawnsilk suffered some neural damage. Stryfe and Tyler escaped again. [Cable (1st series) #1] 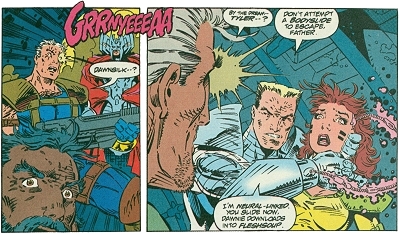 Having lost his family, Nathan grew more reckless than before and took unnecessary risks, though Tetherblood reminded him that the rebellion depended on him to lead them. Nathan knew that his friend was right and pulled himself together. [Cable (1st series) #43]

Finally the Canaanite forces gained the upper hand and consolidated control of global forces. Stryfe thought that he was fighting a lost cause, so he decided to maximize the potential of his endeavors by traveling back in time to the late 20th century. He took the Adam Unit Zero with him. 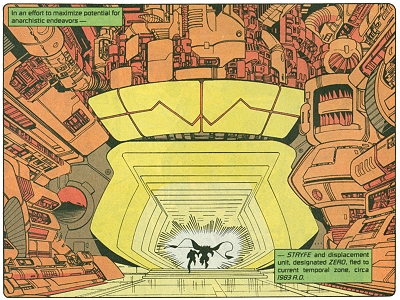 Nathan pretty much had the same idea. With the Canaanites ruling the planet, he chose to travel back in time and prevent Apocalypse from ever becoming this powerful. He arrived in the present some years before his actual birth and operated under the name Cable. He had no idea that Stryfe was in the present too, and having seen his archenemy only once without helmet (briefly, when they were eight years old) he didn’t know that they looked identical and one of them being the other’s clone. [X-Force #17]

The adventures of Stryfe and Cable in the 20th century are dealt with in a follow up feature “Askani / present “, however using his special equipment and Professor, Nathan kept switching between the present and the future various times.

Tyler was found by the Canaanites, who turned them into Agent #345. He was sent back in time, but once in the present he did not act according to his programming, much to the anger of Haight, who now was a high ranking Canaanite General. [Cable (1st series) #1, explained in Cable (1st series) #5]

To repay an old debt, Cable once brought Garrison Kane with him to the future. Partially responsible for the accident that led to his limbs being destroyed, Cable oversaw that Kane would receive special implants created with future technology. [Cable: Blood & Metal #2]

Kane spent one year in the Askani future, at first recovering from the operation and then waiting for Cable to pick him up again. The continued presence of him alerted General Haight, and while his forces battles the remains of Clan Rebellion, Cable reappeared.

He convinced his friends that the Canaanites had built a new Timex unit (a time travel machine), that at all costs had to be destroyed for the Canaanites would use it to go back in time and eradicate all opposition. Hope, Dawnsilk, Eleven, Tetherblood, Boak and Kane accompanied him and battled their way to the unit’s center, with Boak being blasted apart along the way. Only reluctantly Hope connected with Eleven to scan for the right past timeline, to which they wanted to send Kane and Cable back to. Kane to get home, and Cable to ensure the timeline’s safety, as they discovered that the machine had already been used. Haight had sent Sinsear back in time to deal with rogue agent #345.

Clan Rebellion accomplished their task, Kane and Cable departed, and the others blew up the Timex before teleporting out of the place. However Cable was now stuck in the past, as in the meantime his space station Graymalkin had been destroyed. [Cable (1st series) #1-2]

This is the last known chronological on-panel reference to the Askani timeline.

One wonders what happened to Blaquesmith and Sanctity since they were last seen. Blaquesmith too traveled back to the present. He was apparently sent by Sanctity herself to continue to guide Nathan and prepare him for some unrevealed Askani duties he had to fulfill according to her insane philosophies. However when Blaquesmith did not act like she had ordered, she sent another disciple to make Cable do her bidding. [Cable (1st series) #42, 52] Additionally she appeared as astral image various times, making cryptic statements to Jean or Cable, and she even caused a detour for the returning timetraveling Summers couple, who found themselves in the 18th century to witness the first conflict between Mr. Sinister and Apocalypse. [Further Adventures of Cyclops and Phoenix #1-4]

With Apocalypse getting killed by Cable’s psimitar in X-Men : Search for Cyclops #4, the entire Askani future timeline has been erased from existence. While Jean, Scott, Cable and other people, who spent some time there, still remember it, it did not happen for Rachel. Being a chronal anomaly, she wound up somewhere else in the timestream; probably because her (dead) body was still in that future timeline in the instant it ceased to be. Rachel retains only some pale memories of her life as Mother Askani.