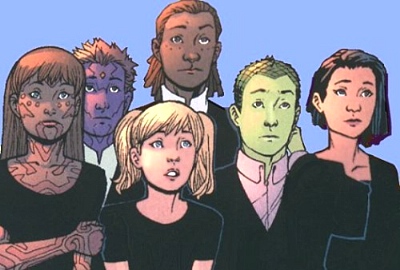 Alpha Squadron was advised by former Alpha Flight member, Jean-Paul Beaubier, aka Northstar. Thus the name Alpha Squadron. When Northstar was killed by Wolverine, the squad was assigned a new advisor, Xi’an Coy Manh, aka Karma. The squad’s colors are white and charcoal grey with red accents.

Powers: reptilian mutation gives him green skin, a spiked carapace instead of hair, a prehensile and elastic tongue, and the ability to camouflage himself, blending in to his surroundings

Notes:
- Victor was very close to his advisor, Northstar. This was in part due to the fact that Victor himself was coming to terms with his sexual orientation. It was clearly implied through dialogue that Victor was gay and his sexual orientation was confirmed by the writers online.
- Though it has not been stated yet, Victor is the leader of the Alpha Squadron and his codename will likely be Anole, which is a variety of chameleon. - Victor’s first name was revealed in New Mutants (2nd series) #7. His last name was given in New Mutants (2nd series) #8.

Powers: Indra’s intended powers allow him to armor up his body with sectional plates.

Notes:
- Indra is from India. - Indra has a younger sister who is also a student at the Institute who has yet to be introduced. - The name Indra is taken from the Hindu god of weather and war.

Powers: Loa’s intended powers allow her to "swim" through solid matter, causing it to crumble around her as she does so.

Powers: ultra-elasticity enables her to negate the rigidity of her molecular structure in order to stretch any portion of her body to great lengths and absorb damage without injury

Notes:
- Andrea’s first name was revealed in X-Treme X-Men #21, her last name in issue #22.
- In her initial appearances, Andrea was romantically interested in Jeffrey Garrett. Her reaction to his presence as a “ghost” at the Xavier Institute has yet to be seen.
- Andrea is the youngest member of Alpha Squadron.

Notes:
- This character is intended to be a Masai. The Masai are a nomadic tribe in East Africa, especially Kenya and Tanzania.