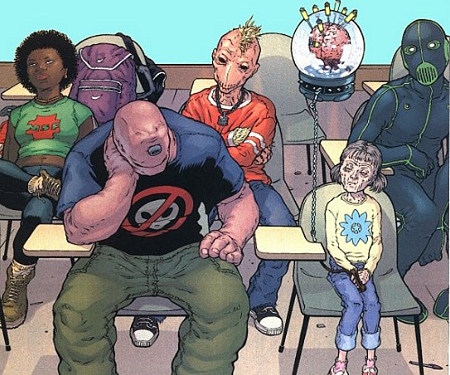 When he joined the Xavier Institute faculty, Xorn was assigned a “special class” of students. These students included those with special educational needs that required some remedial study. These kids were also among the more socially awkward students at the Institute. When Dust joined the school, she was assigned due to the trauma she had experienced and a need to adjust to Western culture. It was not fully revealed what the backgrounds or special needs of the other students might have been. Of these students, only Angel and Dust have been confirmed as continuing their studies at Xavier’s.

Powers: insect mutation gives her wings extending from her backside that enable her to fly or produce ultrasonic vibrations by flapping her wings at high speeds, and can spew a biological acid from her saliva glands that is highly corrosive to the touch

Notes:
- Angel came from a dysfunctional family and was abused physically and sexually by her father.
- Angel was assigned to the “Special Class” taught by Xorn. She was also briefly affiliated with the version of the Brotherhood assembled by “Xorn” while he was impersonating Magneto.
- Angel received a commendation at the Institute’s first prize-giving ceremony for her heroism.
- Angel was romantically involved with her classmate Beak and became pregnant. She laid several dozen eggs and at least six of her children successfully hatched. These offspring all possess both fly-like and avian characteristics to varying degrees.

Powers: produces narrow-band photonic energy from his single eye, controlled by a mechanical implant to produce strobe pulses of light that temporarily paralyze anyone caught in its glare

Notes:
- Basilisk had a very crude but oddly subtle sense of humor.
- Basilisk was killed by Xorn I/”Magneto” who used excessive force to prove a point while under the influence of Kick. [New X-Men #149]

Powers: animal mutation gives him heightened vision, agility, and reaction time, a pointed beak, and feathered wings that fold up along his forearms or extend to allow limited flight

Notes:
- Beak received a commendation at the Institute’s first prize-giving ceremony for his heroism.
- Beak became romantically involved with his classmate Angel Salvatore and she became pregnant. They have at least six offspring who all possess both bird-like and fly-like physical characteristics to varying degrees.

Powers: exists as an astral intelligence housed in a shapeless gas form, keeps himself in a containment suit that approximates human proportions for him

Notes:
- Dummy’s gaseous form was fully released when his special containment suit was pierced by flying glass during the riot at Xavier’s depicted in New X-Men #137. He has yet to re-form and is presumed dead or dissipated beyond return.

Powers: reincarnation within the synthetic body of a Shi’ar Superguardian provides her with vast amounts of superhuman strength

Notes:
- The villainous Cassandra Nova was defeated when she was tricked into transferring her psyche into the body of the Shi’ar Superguardian called Stuff. Her mind was “reset” and she was enrolled as a student at Xavier’s Institute [New X-Men #135].

Powers: reduced to nothing more than a sentient brain in a bottle, which possesses telepathic abilities allowing her to influence the thoughts and actions of others

Notes:
- Martha was an early victim of the U-Men, a fanatical group of mutant-wannabes who sought to create a “third species” by illegally harvesting mutant body parts and transplanting them into their members. Her mutant brain was kept alive and used until being rescued by the X-Men.
- Prior to becoming disembodied, Martha ran away from home. She left a note written in her own luminous blood.