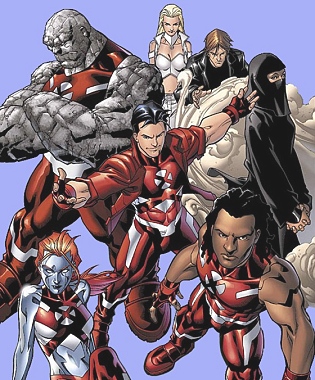 The Hellions are one of the more prominent squads at the Xavier Institute and have recently won the first Field Day competition. They are advised by the Institute’s headmistress, Emma Frost. Several members of this squad had other faculty advisors before requesting to be transferred to Emma’s group. The squad’s colors are red and white with black accents.

Powers: telekinetic able to levitate and manipulate physical objects, project blasts of psychic force, lift himself off the ground, and create force fields to protect himself and others from harm

Notes:
- He is attracted to Sofia but believes her roommate, Laurie, is a “freak among freaks” which is why Sofia initially rejected his affections.
- Julian’s original advisor was Northstar but he requested a transfer. He specifically sought out Emma Frost as his advisor.
- Julian chose his codename in honor of Emma Frost’s late students, the Hellions.
- Julian is the current squad leader of the Hellions.

Powers: composed of a non-toxic liquid metal, allowing her to alter her shape by collapsing into a featureless mass, extending blades from her skin, or molding herself into different forms, molecular adhesion power gives her the ability to cling to solid surfaces and move her body at will even without overt locomotive features

Notes:
- Cessily admires Wither and apparently is the only person he can touch.
- Cessily’s unique body composition makes her immune to some types of powers such as Wither’s “death touch” and Wallflower’s pheromones.
- Cessily was once roommates with Laurie Collins, aka Wallflower. The two had a serious falling out.
- Cessily is Irish-American. - Her first name was revealed in New Mutants (2nd series) #10.

Powers: made of solid and animated rock, giving him superhuman strength, endurance, a highly dense and extremely durable body, and the ability to detach or launch pieces of his body as projectiles that must be physically retrieved and reattached

Notes:
- After being seen frequently among the collective student body, Santo was identified in New Mutants (2nd series) #8, and given a last name and codename in #10.
- Santo’s original advisor was Iceman.
- Santo is Italian-American.

Powers: pariah effect enables him to "tag" himself or others with a unique psi-signal, then mentally make other nearby people receptive to the signal, which overwhelmingly compels them to get away from the broadcaster

Powers: destabilize the binding forces of organic molecules upon physical contact, making them shrivel up and loose their health, and eventually turn to dust if exposed to his touch for too long

Notes:
- Kevin’s mother died when he was born. When his powers manifested, he accidentally killed his father, who tried to comfort him.
- He is an accomplished industrial artist.
- Kevin showed some romantic interest in Wallflower when he first arrived at Xavier’s school.
- Kevin was prosecuted for the death of his father but was remanded to the custody of the Xavier Institute.
- Danielle Moonstar was originally Kevin’s advisor and he was part of the New Mutants squad. He requested a transfer to the Hellions after a falling out with Moonstar who advised him to face the legal charges over his father’s death.