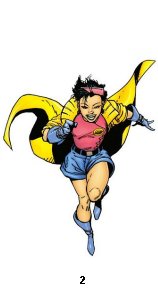 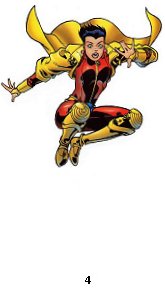 1) While living clandestinely in the X-Men’s Australian base, Jubilee scrounged for clothes. As a result, her look was an amalgam of the X-Men's attire: Dazzler's leotard, Storm’s vest, Wolverine’s gloves, Longshot's bag, Rogue’s boot and a pair of shades that would become a signature part of her look. [Uncanny X-Men Annual #15, Uncanny X-Men #248]

2) When Jubilee first started working with Wolverine, her "costume" was nothing more than a sleeveless T-shirt, a pair of shorts and her trademark yellow raincoat. Early versions of this outfit had a red shirt and green shorts, intentionally patterned after DC Comics’ most iconic sidekick - Robin. She also wore a pair of pink shades and large, round earrings with her name on them. [Uncanny X-Men #257] The color scheme was soon tweaked slightly to include a pink shirt and blue shorts. [Uncanny X-Men #271]

3) When the X-Men reunited after the events of the X-Tinction Agenda, they briefly wore basic X-uniforms to give the team a unified feel. For several members, including Jubilee, it was the first time wearing these standard suits. These were updated versions of the classic X-Men costumes designed by Moira MacTaggert. They included body armor and other special functions. Jubilee kept her sunglasses and her trademark earrings to personalize the ensemble. [Uncanny X-Men #273]

-) After the start of the Blue Strike Force, Jubilee went back to her previous yellow jacket, T-shirt and shorts. [X-Men (2nd series) #4]

5) When Adrienne Frost opened enrollment at the Massachusetts Academy to the public, Generation X adopted new costumes to conceal their identities. Besides the addition of the mask, these costumes had a more equal red-and-yellow color scheme. [Generation X #51]

6) After the school’s mutant students were exposed, Generation X redesigned their costumes again. The masks were gone and now Jubilee wore red-and-black leggings and a red halter top, with a stylized red-and-yellow 'X' symbol on the front. She also seemed to prefer a fur-trimmed coat over her yellow raincoat. [Generation X #63]

-) A short time later, the team members received customized reddish-brown uniforms made of a smart material. Jubilee basically wore a short black bodystocking that went above her knees and slightly below her elbows. Over it, she wore reddish-browns short, in a style similar to her original outfit and a tight T-shirt in two shades of red-brown with yellow lining and a huge yellow encircled X-symbol on her chest. Actually, Jubilee never got to wear this outfit on a mission, as Generation X disbanded shortly after she changed looks. [Generation X #71]

7) While working with X-Corps, Jubilee had two different uniforms to choose from. Like her teammate Husk, she chose the more business-like outfit: a black suit with a red shirt and black tie, with red trim in some areas. [Uncanny X-Men #403]

-) When she returned to the X-Men, Jubilee went back to her classic look: yellow raincoat, oversized sunglasses, in addition to a low-cut red shirt, yellow belt and blue/black pants. [Uncanny X-Men #423]

8) After losing her powers on M-Day, Jubilee was recruited to join the New Warriors and given tech-based powers. Calling herself Wondra, Jubilee now wore a full body-suit in yellow and white. This suit included ribbed yellow padding on the sides of the legs and "WONDRA" written in white running down the length of each yellow sleeve. Her powers included superhuman strength provided by the large yellow and white power gauntlets on each forearm. This look included a full yellow and white mask that covered her entire head and goggles with yellow lenses. This head-to-toe look completely concealed Jubilee's identity. [New Warriors (4th series)#1]

9) Jubilee soon adopted a second and far simpler Wondra costume. This black bodysuit was accented with a pair of thin yellow stripes that ran up each arm. At the shoulder, they split and one trailed across her back while the other continued just below her collarbone meeting in the middle to form a stylized W in the center of her chest. Similar stripes ran up the side of each leg and encircled her waist forming a W in the front. She wore a half mask that covered the lower half of her face. Yellow boots and silver power gauntlets completed this look. [New Warriors (4th series) #9]

-) After the New Warriors disbanded, Jubilee lived a normal life and usually wore street clothes. She sometimes wore her signature shades and yellow jacket, as well.

10) When she became a vampire, Jubilee dressed the part. While serving at Xarus' side, Jubilee wore a sexy black leather bodysuit with a plunging neckline. This was accented with a woven leather pattern across her midriff and along her hips. She also wore a ruby-like medallion that protected her from the sun's rays. [X-Men (3rd series) #2]

11) Jubilee now wears a variety of full-body black bodysuits along with her trademark yellow raincoat and pink sunglasses. This look reflects her struggle to reconcile her old personality with her new reality as a vampire. [Wolverine & Jubilee #1]