Jubilee’s parents were Chinese immigrants who moved to the United States shortly before she was born. She was named Jubilation for the joy her family felt when they came to America. Her father was a bank director and her family became quite wealthy. They ended up living in Beverly Hills and young Jubilation was enrolled in a prep school, where her talent for gymnastics was discovered. She showed great promise and the potential to become an Olympic level gymnast.

However, Jubilation used her superior agility to commit petty crimes. She and her best friend spent most of their time at the local mall, shoplifting and making their escape on their rollerblades. Jubilee didn’t steal for lack of money but for the thrill of doing it. As Jubilee admitted, she wasn’t proud of doing it, just of how they did it. One day, Jubilee’s luck ran out and she found herself trapped in a dead-end alley by a pair of mall rent-a-cops. Fearing juvenile detention, not to mention her parents’ reaction, she panicked and her pyrotechnic powers manifested. The resulting blast destroyed the entire alley. Her first instinct was to run to the beach, where she tried to keep her hands wet so that it would never happen again. [Generation X #24]

Jubilee told her parents about her strange abilities, but it didn’t seem to be a problem for them. She quickly learned how to control her powers to a limited degree, enough to keep them from activating unintentionally.

Not long after her powers emerged, Jubilee’s parents were killed in what seemed to be a car accident on Mulholland Drive. At the time, Jubilee had been at the shopping mall with her friends. When she returned home, Jubilation found the police waiting to inform her of the accident and she was handed over to another couple named Lee from the neighborhood. Jubilee didn’t like it there and ran away as soon as possible. She returned to the mall, which now seemed to be her only home. [Wolverine (2nd series) #72]

Jubilee lived there for weeks, surviving either by stealing and earning money performing with her fireworks. Mall security was annoyed by her constantly outrunning them and eventually called in an amateur team of mutant hunters, the M-Squad. That same day, the mall was visited by the female contingent of the Australian X-Men group - Storm, Rogue, Dazzler and Psylocke. Jubilee was the sole witness to their arrival through one of Gateway’s teleportation portals. Admiring the four beautiful ladies, Jubilee secretly followed them through the mall.

When the M-Squad attacked the young girl, they were easily defeated by the X-Men who then left the scene exactly the same way they had arrived. Jubilee was intrigued by these other people with super-powers. For reasons known only to him, Gateway deliberately left his portal open longer than necessary to bring the X-women home. Jubilee saw this and jumped through after them. [Uncanny X-Men (1st series) #244] 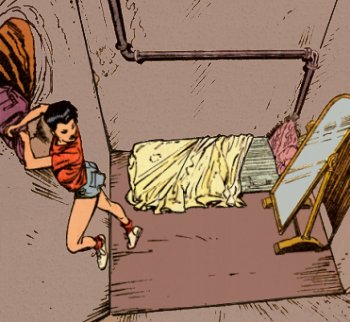 Jubilee found herself in the middle of the Australian desert. She was somewhat scared and wondered what the X-Men might do to her. Therefore, she took up secretly living in the X-Men's base, an abandoned town in the Australian Outback that had formerly been used by the villainous Reavers. She survived by scrounging food from the pantries and making herself a small hidey-hole to live in. Gateway was the only one who knew she was there but he didn't alert the team to her presence. Jubilee’s presence was almost exposed when Nanny and the Orphan Maker attacked the base and saw her. In the confusion of the battle, she slipped away before any of the X-Men became aware of her. [Uncanny X-Men Annual #13, Uncanny X-Men (1st series) #247-248] 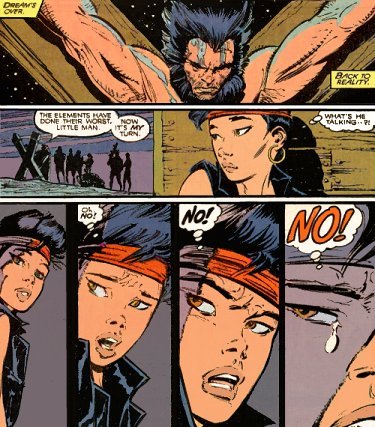 In time, the X-Men might have found her but, just after Jubilee arrived, the team began to dissolve. Some team members were seemingly killed and others left due to personal matters. When the Reavers returned to reclaim their base, the remaining X-Men used the Siege Perilous as an escape route. Psylocke, Havok, Dazzler and Colossus entered the magical doorway and were taken to new lives, unaware of the secret houseguest they left behind. When Wolverine returned after a brief leave of absence, he was taken by surprise by the Reavers, who placed him on a cross and "crucified" him in fire and blood. Jubilee was horrified by this and wanted to help the strange man. That night, she helped free him and took him to her hideout below the town.

There, Jubilee tended to Logan’s wounds and stayed by his side even when he became delusional. Realizing that Wolverine was critically wounded, Jubilee dragged him through the desert to Sydney, where they boarded a ship headed for Madripoor. [Uncanny X-Men (1st series) #251-253]

Jubilee became something of a kid sidekick to Logan, looking after him as his healing factor dealt with his wounds. During this period, they formed a close, father-daughter bond. When they reached Madripoor, they encountered Lady Mandarin, 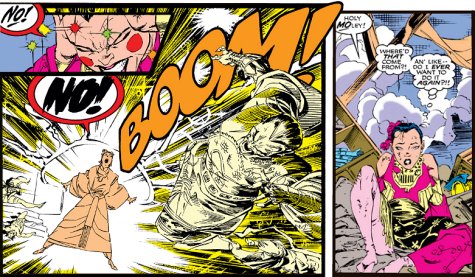 who was actually Psylocke brain-washed and in a new, Asian body. Jubilee was captured by Psylocke’s master, the Mandarin, and dressed up like a China doll. In desperation, Jubilation unleashed an unprecedented amount of her mutant plasmoid power, completely demolishing the house she was in. This incident made Jubilee extremely wary of pushing the limits of her powers, as she was afraid of hurting people again. 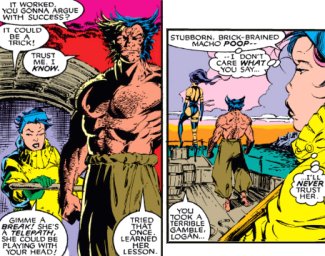 Psylocke was eventually freed from the Mandarin's control when she used her psychic knife on Wolverine. This created a psychic backlash and she saw herself in his memories as she once was. Betsy joined Wolverine’s traveling party but Jubilation did not immediately trust Betsy and the two of them were heavily at odds for their first few months together. However, for the sake of Wolverine, they worked together and the trio shared several other adventures in Madripoor. [Uncanny X-Men (1st series) #257-258]