Another timeline provides the answer to the question What if Magneto and Professor X had formed the X-Men together?  Instead of leaving with the stolen Nazi gold, Magneto was convinced by Gaby Haller to stay and join forced with Xavier to achieve their dreams. Together, 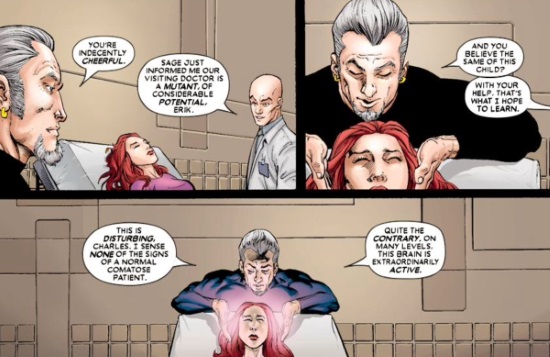 the two men accomplished a lot in politics, such as facilitating the peace process in the Middle East and Xavier never lost use of his legs - but he also never got around to creating Cerebro and any mutants he found he found by coincidence. When a comatose Jean Grey was brought to Xavier and Larry Trask’s Sentinels were sent after his people, events were set in motion, which led to the formation of a new team of X-Men.

When Legion warped reality and created the Age of X, there were a number of mutants whom his subconscious mind classed as a threat. Xavier was one of these and he put into a drug induced 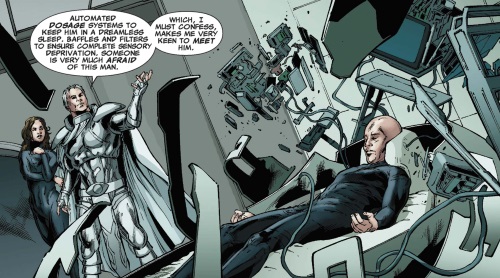 coma in the basement of Fortress X. Day after day, the outside world tried to lay siege to the base but the X-Men fought back constantly. When Rogue began to suspect something was amiss, her investigation led her to Xavier. She absorbed his powers and discovered the outside world didn’t exist at all. Xavier was freed from his captivity and it was his influence that gave Legion the courage to face up to his own subconscious and put reality back to the way it should have been.

In the House of M reality, it was Magneto who championed the emerging mutant race to his side. Hesitant at Magneto’s belief that mutants should inherit the Earth, Charles kept his distance but eventually came around to Magneto’s way of thinking. Charles was instrumental in helping liberate the enslaved mutants on Genosha but, sometime after that, he was believed killed. A grave was erected in Magneto’s citadel but, when Cloak investigated underneath the headstone, he discovered there was no body, leading some to believe that Charles had faked his death.

In the future that showed The End of the X-Men, Xavier had fathered a child with Lilandra, but was not aware of the child’s existence. Relations between the Shi’ar and X-Men had soured when Cassandra Nova, Xavier’s sister, tried to take over the Empire. When Jean Grey and the Phoenix 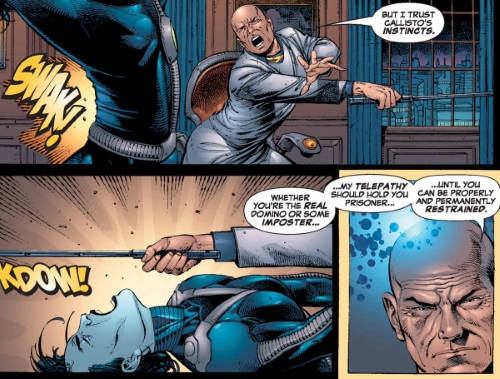 Force re-emerged, the Shi’ar Chancellor sent War-Skrulls to Earth and they wiped out a lot of the X-Men. Xavier, living on Genosha, was also a target and he barely survived his encounter with a War-Skrull posing as Domino. Xavier and the X-Men decide to head into space to take on the Shi’ar directly. There, they learned that Lilandra had been driven insane by Cassandra Nova. Revealing herself as the mastermind behind the attacks on the X-Men, Xavier’s sister took on the combined might of the X-Men and Imperial Guard. Unable to defeat her, Xavier offered a truce to Nova and together they became one with the Phoenix Force alongside Jean and the other X-Men.

The X-Men Forever timeline showed an alternate take on events after Magneto died on Asteroid M in X-Men (2nd series) #1-2. It was revealed that Xavier had been keeping a secret from the X- 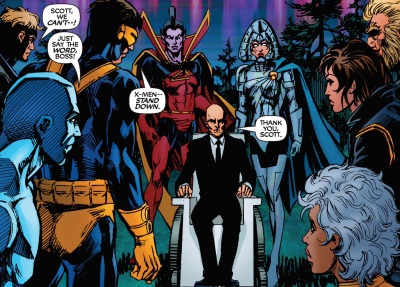 Men, the fact that mutants would die young thanks to their powers burning out. An anti-mutant group called the Consortium knew this and were targeting the X-Men to stop them from finding a cure. Xavier was devastated to lose both Wolverine and Beast to the Consortium’s machinations. He was finally forced to leave his team when the Shi’ar attacked the X-Men looking for him. Months before, a War-Skrull posing as Xavier had attacked the Shi’ar and exploited a weakness in their security that the real Xavier had inadvertently caused. Xavier knew he had to pay for his mistake, so he left Earth to live out his days with Lilandra, under the watchful eye of the Imperial Guard.

In the Battleworld domain of Mutopia, Charles Xavier had been killed in an altercation with Cassandra Nova many years before. In the time that passed, Magneto took over the school and even found a Phoenix Egg. When the X-Men discovered he wanted to use the Egg for his own 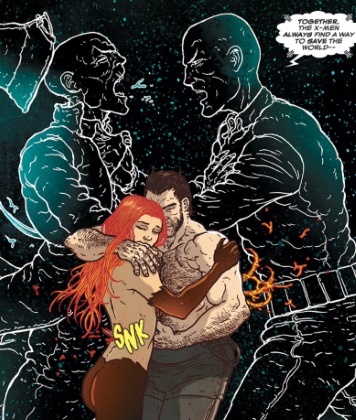 nefarious schemes, they attacked him. Just as Magneto was killed, the sentient bacteria Sublime appeared, declaring his desire for the Egg. As Sublime was controlling numerous alternate versions of Beast, the X-Men had their work cut out for them until Xavier suddenly appeared in the body of the recently deceased Quentin Quire. After purging Sublime from the Beasts, he declared the real threat was the Phoenix Egg. Since his and Nova’s death, the two had been in constant psychic battle over the very essence contained in the Egg. Nova had won and a resurrected Jean Grey emerged from the Egg, tainted by Nova’s influence. The Phoenix laid waste to the X-Men until Xavier merged with Wolverine and together they used their combined power to get through to the real Jean. Whilst Xavier finally killed Nova on the astral plane, Wolverine killed Jean in the physical one, putting an end to the destruction.

In Matthew Malloy's timeline, Xavier discovered the boy when he was young and realized he was an incredibly powerful mutant. Realizing there were no limits to the boy's power, he decided

to keep the youth hidden from everyone and used his telepathy to create mental blocks, stopping Matthew from using his powers. In the years that passed, Matthew remained off the X-Men's radar and history continued as normal, with some notable exceptions to Xavier's personal life. At some point, he would have a relationship with Mystique and father a child with her, even going as far as leaving her the X-mansion when he died. Aside from that, history played out the way it should have in the Prime universe and Xavier died at the hands of Cyclops during the Avengers/X-Men war. Without Xavier's mental tricks, however, Matthew Malloy rediscovered his powers and realized what had been done to keep him quiet. He killed a number of X-Men in his anger and it was the intervention by a time travelling X-woman named Tempus who helped stop the chaos. Tempus went back in time to before Xavier ever found Matthew and told him of the consequences of his actions. Xavier made the decision to use his powers to make sure Matthew's parents never met, thus stopping Matthew from ever being born. History was re-set and the X-Men saved, with the world continuing on a timeline that never featured Matthew Malloy.

Matthew Malloy's timeline still existed though and there were some surprising consequences of it. The child that Xavier and Mystique fathered would go on to have a child of her own. The baby boy was named Charles after his grandfather and he would go on to possess a number of striking similarities to his namesake, such as his telepathic abilities and his premature baldness. Unlike the elder Xavier,

the young Charles became angry at the world around him for the way mutants were treated and he soon found a like-minded soul in another of Mystique's other children, Raza. After forming his own Brotherhood, Charles travelled back in time to a point he felt marked a dark turning point in mutant history. The teenage versions of the original five X-Men had been transported to their future, and Charles decided it was their intervention that caused the civil unrest in his time period. He clashed with the present day X-Men when he forcibly tried to send the original five back, and was seemingly killed in the aftermath. Nevertheless, he somehow survived and tried again numerous times to take on the X-Men and the original five. 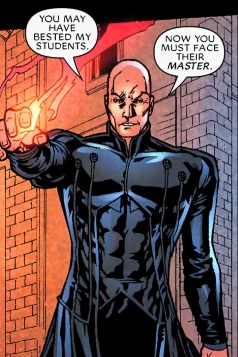 When the Shadow King from the 616 timeline ended up in an alternate universe he decided to continue his decades long battle with Xavier. He found the new universe's version of Charles easier to tackle and he fully possessed him as well as the rest of the original five X-Men. Using Charles' body, he and the rest of Shadow X managed to wipe out all the other superheroes in their universe. Travelling to the 616 timeline he continued his vendetta against superheroes but came up against the newly formed Excalibur. He was placed in prison for his crimes, but his team soon tried to break him out. The rest of Shadow X tried to free him by allying themselves with Albion and Lionheart, who were also enemies of Excalibur. During the breakout, the Shadow King tried to possess Lionheart and so she strapped a device to him that trapped him Xavier body. She then killed Xavier/Shadow King to stop him from taking over anyone else.