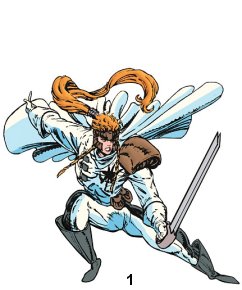 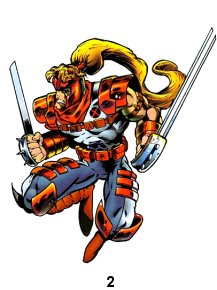 1) Shatterstar's original costume was primarily white. The tunic had loose sleeves, an eight-pointed black star on the left breast and three straps holding it up on the right. It also had a large brown shoulder pad on the left side. His leggings were white on the inner portion and gray on the outside of his legs. He wore white gloves, gray boots and a white "half-cape" from his shoulders. He wore a heavy brown belt with several pouches and smaller weapons. His right shoulder was adorned with a large, armored shoulder pad. An open-faced brown helmet covered his forehead and cheeks while leaving his face exposed. [New Mutants (1st series) #99] 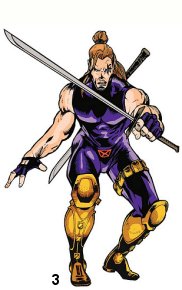 2) His second costume was an elaborate mix of white and red components. His main uniform included a white, sleeveless shirt with a small black 'X' imprinted under his left shoulder. He wore a bandolier strap across his chest, a red scarf around his neck, and a multi-pocketed red belt with an eight-pointed black star on the buckle. His pants were gray with white on the outer legs. 'Star also wore large shoulder pads, banded gauntlets, gloves and an open-faced, armored mask, all red. His boots had large two pointed crests up where they ended at the knees. [X-Force (1st series) #19]

3) After X-Force was reorganized and given new team uniforms, Shatterstar's costume became a sleeveless purple bodysuit. It was held up by a set of three straps over the left side. He wore large yellow shin guards over his leggings in place of regular boots. The costume was completed by a series of yellow pouches and straps on his arms and legs, and a pair of fingerless purple gloves. A later version of this costume featured red accents and accessories instead of the yellow shown here. [X-Force (1st series) #44] 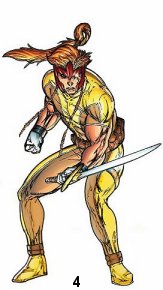 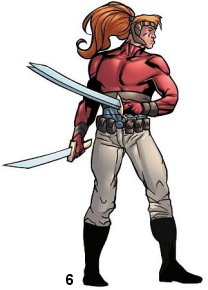 -) While helping Rictor take down his family business, Shatterstar wore combat-ready street clothes. This included a simple set of blue jeans, a sleeveless denim jacket and no shirt. He also wore a red band around his forearm, fingerless black gloves and a red bandana on his head. Shatterstar's belt was red with multiple pockets and he also wore heavy boots and red knee pads.

4) When Shatterstar joined Cable's latest incarnation of X-Force, he wore a number of different outfits in quick succession. Most prominent among these was a yellow and brown bodysuit with short sleeves. With this he wore a brown utility belt, short white gloves and black leather wristbands. This look also included brown bands around each ankle and an open-faced, red metallic "mask". [X-Force (2nd series) #1]

5) While on an inter-dimensional adventure, 'Star wore a sleeveless, white bodysuit with matching gloves and boots. This short-lived outfit also included a brown belt and leather bands around his wrists and thinner bands around his biceps. he also wore the red metallic face mask from his previous look. 'Star also sported a version of this costume with short sleeves. [X-Force: Shatterstar #1]

6) Shatterstar wore a different outfit during Civil War. He wore a red shirt with brown and metal straps around his abdomen. His belt had multiple pouches and a small circular buckle, and his pants were military issue khakis tucked into a pair of combat boots. He also wore a headpiece resembling the one he originally came from Mojoworld with. [Civil War: X-Men #1] 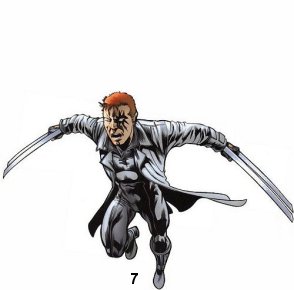 7) When Shatterstar resurfaced as a thrall of Cortex, he had a whole new look. This consisted of a white bodysuit with a dark grey stripe running up his inner thighs to just below his ribcage. He wore a loose, open gray collar and a white trenchcoat, which concealed the new retractable blades on his wrists. He also wore fingerless white gloves and matching boots. 'Star finally cut off his signature ponytail, in favor of a short cropped hairstyle. [X-Factor (3rd series) #42]

8) After a while, Shatterstar adopted a new look that matched the other outfits worn by the team. This included a black and white leather jacket with a black X design on each wrist. His pants were black with white on the inseam. He also wore a black shirt and gloves. Across his chest, he wore a broad brown leather strap. He also wore matching brown belts, one that hung loose and was adorned with a metal X symbol. Black boots with white accents completed the look. [X-Factor (1st series) #200]