Shatterstar is the child of the Earth mutant Allison Blaire, alias Dazzler, and the artificially engineered biped Longshot, from the dimension known as the Mojoverse. He was born sometime after the fall of Mojo, and was delivered by a time-traveling Rictor and his own future self. As part of a temporal loop, Shatterstar used Arize's machinery to ensure his parents did not remember his birth, and then transported his infant self where he needed to be. [X-Men (2nd series) #11, X-Factor (1st series) #259]

Young Shatterstar was next seen as an adult, 100 years in the future, rebelling against the rule of the tyrannical Mojo V. At this point in his life, Shatterstar apparently believed himself to be one of the artificially engineered bipeds of the Wildways, the slave race of Longshot who turned against Mojo and the Spineless Ones. Shatterstar lived on the run in the shadows for two years before joining the Cadre Alliance. The Alliance's efforts in Shatterstar's time were no more effective than those of Longshot a century prior against the original Mojo. Desperate for aid, Alliance scientists and mystics constructed an elsewhen transporter to send a representative through time and space in order to recruit the legendary X-Men from Earth, to join them in their fight. Shatterstar volunteered to be the representative and crash-materialized 100 years in the past in the X-Mansion's underground Danger Room. [New Mutants (1st series) #99] 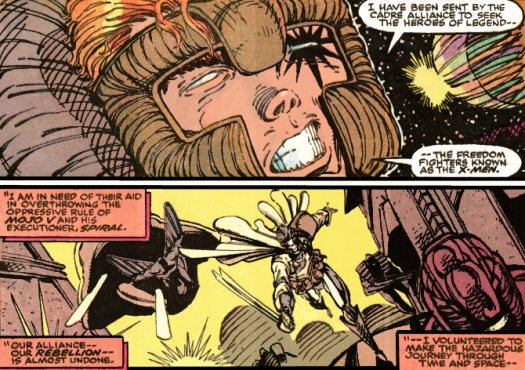 The X-Men were off-world at the time, but Cable and his band of New Mutants were in residence to greet Shatterstar. Suddenly thrust into battle with the Danger Room's attack drones, Shatterstar was in no mood to quietly explain his position to the New Mutants when they entered and had to be beaten unconscious by Cable in order to calm him down. While he was recovering, however, dog-soldiers from Mojo's Imperial Protectorate locked onto Shatterstar's transport signal and followed him to the present time and local space. Shortly after Shatterstar revived and related his story to Cable's team, they were attacked by the legion of dog-soldiers. During the battle, Shatterstar demonstrated his commitment to winning at all costs when a dog-soldier grabbed him from behind and Shatterstar stabbed himself through his own abdomen in order to penetrate the construct warrior behind him. The Protectorate soldiers were defeated, but Shatterstar's elsewhen technology was damaged in the mêlée, leaving him trapped as an exile on Earth. He and Cable reached an agreement: Shatterstar would join the newly-minted X-Force strike team for the present, lending his swords and skill to the fight for Xavier's dream, in exchange for Cable's promise to one day return with him to Mojoworld and overthrow the reign of Mojo V. [New Mutants (1st series) #100]

Since the dog-soldiers were merely one of several enemies who knew the X-Mansion's location, X-Force relocated to an abandoned Sentinel base in 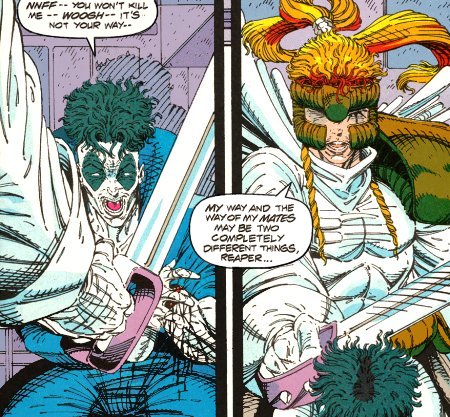 the Adirondack Mountains. In his first battle with the Mutant Liberation Front, Shatterstar demonstrated his capacity for violence by severing the hand of his opponent, Reaper. He made a point of telling the dismembered mutant that he would have killed him at any other time, but was willing to temper his instincts for the sake of Cable's sensibilities: kill in self-defense, never in cold blood. [X-Force (1st series) #1] 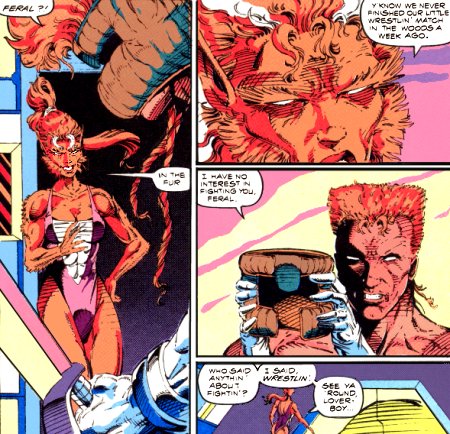 Shatterstar's approach to killing was quite different from one of his new comrades, Feral — she could not temper her murderous instincts as he could, and would even lash out violently at her own teammates when provoked. This led to an odd dichotomy between the two comrades, a love/hate relationship as 'Star respected Feral's skill and ferocity in combat, yet condemned her for her lack of self-control. Feral seemed to be attracted to Shatterstar and openly flirted with him. Shatterstar seemed to be oblivious to her overt flirtation and seemed annoyed by her comments. It's unclear whether Feral was seriously interested in him or merely toying with him. [X-Force (1st series) #5]

During X-Force's fight with Black Tom and the Juggernaut in Manhattan, Shatterstar proved to be surprisingly effective against his unstoppable opponent. 'Star's mystically-forged blades were capable of penetrating Juggernaut's magical force field and defenses, breaking the magical bonding that held Marko's helmet to his armor and even harming Juggernaut physically by stabbing out his eyes. Juggernaut quickly regenerated, but Shatterstar proved himself to be a formidable foe. [Spider-Man #16] 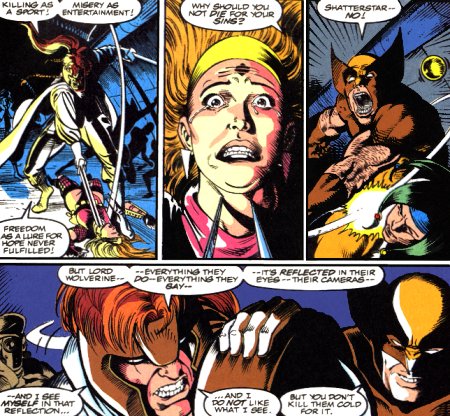 As he tried to acclimate himself to Earth culture, Shatterstar initially had difficulty reconciling the role of television in this new world as opposed to his old one. Whereas television was literally life-or-death on Mojoworld, things were quite different on Earth. His studies brought to his attention the activities of the "Vidkids," a street gang who murdered street-dwelling mutants on camera, then sent the videotapes to the news channels. Intrigued by these children and how their antics mirrored his homeworld, Shatterstar traveled to New York to stalk the murderers. On their trail, he encountered Wolverine of the X-Men, who had also taken an interest in the killings. Wolverine had apparently achieved legendary status for his deeds opposing Mojo by Shatterstar's time and 'Star actually bowed to Logan, calling him "Lord Wolverine." The two joined forces in hunting down the Vidkids, and caught them in the process of making their next "picture" with another innocent victim. In fighting the gang, Shatterstar realized they were in fact nothing like his people back home. The Vidkids did not fight for their own freedom or for some greater cause like the arena warriors back on Mojoworld, but merely out of some twisted sense of fun. Enraged at what he saw as a mockery of his people and their fight, Shatterstar was ready to kill the Vidkids, but Wolverine convinced him to refrain from it. Instead, they merely destroyed the gang's tapes and footage, leaving them for the police. [Wolverine (2nd series) #54]

Sometime later, Shatterstar was sparring with Warpath in the forest outside their base when X-Force was attacked by the new Brotherhood of Evil Mutants and their Morlock allies. After mid-air combat with the flying Sauron proved too hazardous, Shatterstar raided a nearby weapons cache for long-range armaments to turn against the pterodactyl man. They then carried the battle back indoors where the rest of X-Force were dealing with their own opponents. Things took a tragic turn after Sauron skewered Cannonball on his talons. Cable dealt with Sauron personally but, as the Morlock leader Masque continued to threaten X-Force even then, Cable commanded Shatterstar to summarily execute the villain on the spot, impaling him from behind on his sword. [X-Force (1st series) #6-10] 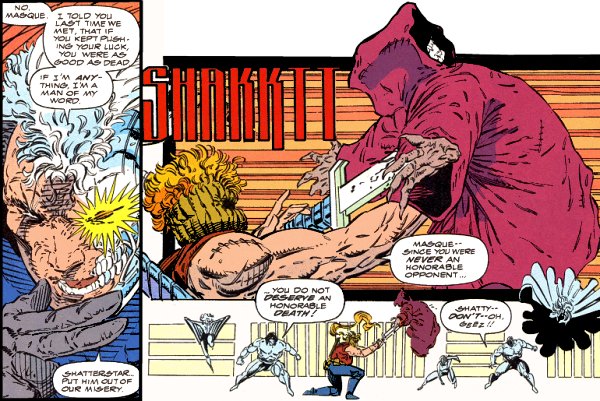 While the rest of X-Force went off to deliver a warning to the Morlock population not to follow up on their leader’s actions, Shatterstar remained behind to continue his training and ended up dealing with an unwelcome burglar named Deadpool. Their fight was fierce but brief, with the more seasoned Deadpool emerging as the clear winner. [X-Force (1st series) #11]

This infiltration kicked off a series of events which ultimately led to X-Force's base being destroyed in an explosion by Deadpool's employer, Mister Tolliver, and Cable being separated from his team. On the run from SHIELD and Department K after the last battle at their base, Shatterstar and the rest of X-Force began hiding out at Camp Verde, Warpath's abandoned reservation in Arizona. [X-Force (1st series) #13-15]

X-Force was caught completely off-guard when they saw a news clip of Cable's apparent assassination attempt on Professor Xavier. Although Shatterstar pointed out the rather obvious tactical problems with visiting the scene of the crime in New York, Cannonball insisted that they owed it to Cable to either clear his name or bring him in. Their scouting mission quickly turned into a brawl with X-Factor, though, when Wolfsbane and Strong Guy turned up looking for clues as well. 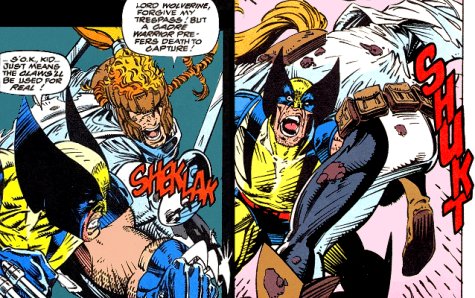 Believing X-Force could provide information about their former leader's whereabouts, or possibly had even acted as accomplices, X-Factor tried to bring them in. Shatterstar ended up dueling with Quicksilver after the speedster stole one of his own swords. The scouting team attempted to flee back to Arizona where they had left the rest of X-Force, but Havok plasma-blasted their IPAC ship, forcing them to ground before they could get to safety. X-Force regrouped somewhere in Texas just in time to face the combined forces of X-Factor and the X-Men Blue strike force. Tempers flared and the two groups came to blows. Despite his reservations, Shatterstar was forced into combat with Wolverine. Logan eventually stabbed him through the chest and, like the rest of his team, Shatterstar was captured and imprisoned inside the Danger Room until the whole mess could be sorted out. [The X-Cutioner's Song crossover]

Although Cable was eventually cleared of any wrongdoing (right before his apparent death) X-Force was still technically responsible for any number of crimes committed during their time under his command. Xavier and the X-Men chose to hold them under house arrest until a decision could be made. Surprisingly enough, that decision came from Cannonball, as he simply and forcibly told Xavier to back off and let them live their own lives. [X-Force (1st series) #19] 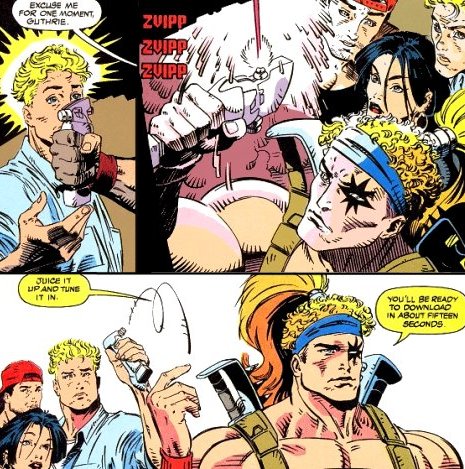 Setting up permanently in Camp Verde, X-Force began outfitting themselves with the help of Lila Cheney's intergalactic connections. Shatterstar proved himself to be surprisingly tech-savvy, casually strolling in to fix a communications array in moments after the other members had struggled under it for nearly an hour. [X-Force (1st series) #20]

X-Force engaged in several rapid combat situations after that, battling SHIELD and War Machine, the Externals and the Friends of Humanity, before being reunited with Cable, who had just returned from his future. On one of their missions, Shatterstar also met Adam X, the X-Treme, an alien warrior he considered worthy of personal combat with him. [X-Force Annual (1st series) #2]

When X-Force next battled the Mutant Liberation Front, Shatterstar once again came up against his personal punching bag, Reaper. The mutant villain fared just as poorly against Shatterstar as before, losing another hand to the swordsman. As Shatterstar was about to deliver the killing blow, however, he was stopped by Wildside, who had mind-warped Siryn and was holding her hostage. Wildside demanded Shatterstar spare Reaper's life and toss over his sword, or Siryn would be killed. Wildside grabbed the sword after 'Star released it, but still refused to let Theresa go. Undaunted, Shatterstar began humming, building up a vibratory charge. At the perfect moment, he released the energy through the sword in Wildside's hand right as it was pointed at Reaper, blasting the fallen MLF member and surprising Wildside long enough for Shatterstar to jump in and overpower his opponent. X-Force hardly came out ahead in that battle, however, as Feral defected to the MLF and Sunspot disappeared into thin air. [X-Force (1st series) #27-28] 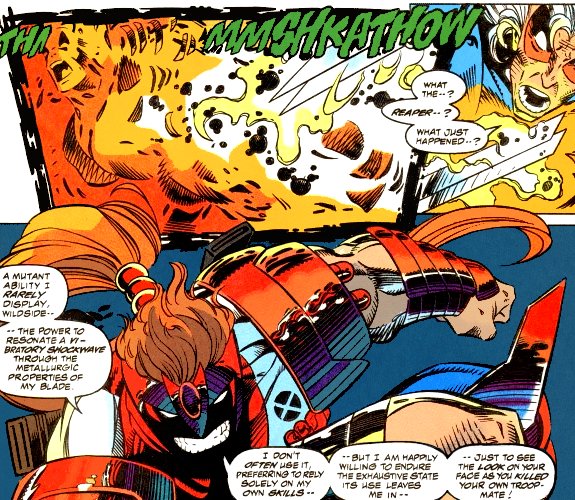