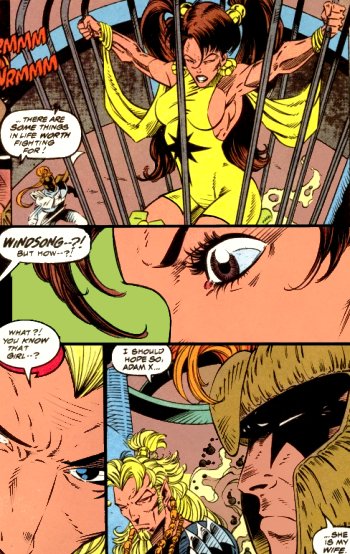 Shortly afterwards, Shatterstar was spending a day alone in Phoenix, trying to acclimate better with humanity, when he was assaulted and kidnapped by the assassin-for-hire named Arcade. The killer had been hired by Major Domo, the Master Programmer of Mojo V's Imperial Protectorate, to eliminate Shatterstar's potential threat to Mojoworld by running him through the death traps of Arcade's Murderworld. Using a family of four as hostages, Arcade forced Shatterstar into battle with three dog soldiers from the Mojoverse. Despite the odds, Shatterstar defeated his opponents and set the family free. Although Arcade let the civilians go, Shatterstar proceeded to the next stage, fighting another of Arcade's "clients," X-Treme. The two fought briefly before Shatterstar convinced Adam to reveal why he felt it necessary to assault his former comrade: Arcade was holding another hostage to ensure X-Treme's performance against Shatterstar. To both Arcade and X-Treme's surprise, though, that hostage was Shatterstar's intended genetic bond-mate, the warrior of the Cadre Alliance known as Windsong. Assuring X-Treme that Windsong would prefer death to capture, Shatterstar and Adam joined forces to hunt down Arcade within the Murderworld complex. They eventually found the assassin in his control room, where he once again threatened Windsong's life. Shatterstar realized the woman was only a holographic projection, however, and tricked Arcade into revealing the charade. He then stabbed Arcade through the chest, only to reveal the villain as a robot double. With nothing left to keep them in Murderworld, Adam X and Shatterstar parted in peace. [X-Force (1st series) #29-30] 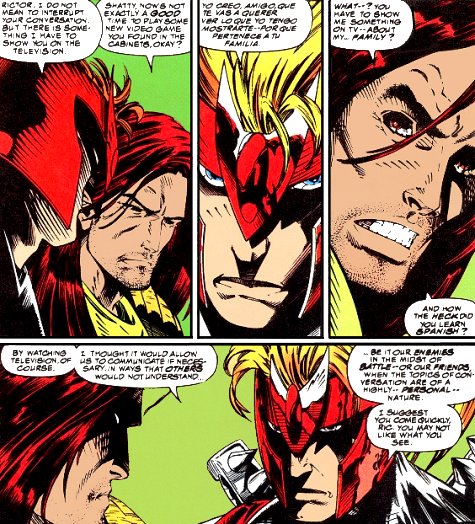 As time passed, Shatterstar developed a close friendship with his teammate, Rictor. 'Star first opened up about his "wife" and history to Ric, and made the effort to learn Spanish so that the two of them could speak privately if they needed to, on the battlefield or off. [X-Force (1st series) #34]

In his efforts to learn more about humanity, he also learned to play chess with the Professor... and watched a lot of MTV with Rictor. When the former Morlock named Thornn was arrested for a series of old murders, Shatterstar and X-Force were drawn into the conflict between her and her sister, their old teammate Feral. Apparently responsible for four murders, Feral led Cannonball, Shatterstar, Thornn and their police escort into a "cat and mouse" game inside her old apartment complex in the Bronx. Shatterstar regarded Feral as a traitor, and continued to suggest she be put down like a wild animal. Despite her repeated attacks on them, however, Cannonball refused to allow Shatterstar to carry out the kill order. Instead, Feral was forced to open up about her past and then be taken in alive, to be put on trial for her crimes. [X-Force (1st series) #40-41] 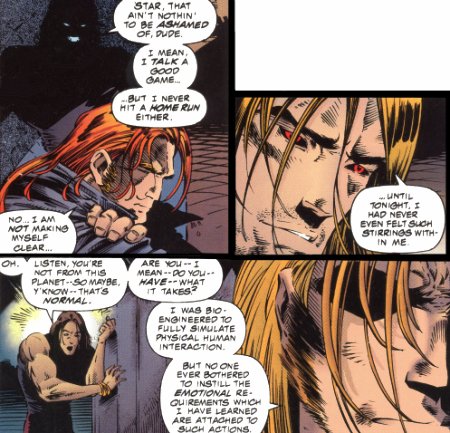 Later, while attending a nightclub in Manhattan with Rictor, Shatterstar was pulled into an intimate dance with a beautiful woman, but ran out of the club as he became overwhelmed by the emotional sensations of the moment. Outside, he confided in Rictor that, although he was physically capable of having intimate relations with someone, it had never been an issue before. On Mojoworld, Shatterstar's biped race was bio-engineered into adulthood and reproduction was carried out by a clinical extraction and manipulation of two genetic sequences. The capacity for love, while possible, was never relevant to him before, much less the additional complications of "dating." Ric promised to help 'Star figure it all out, but then were drawn into a confrontation with Reignfire and the Mutant Liberation Front immediately after that. [X-Force (1st series) #43] 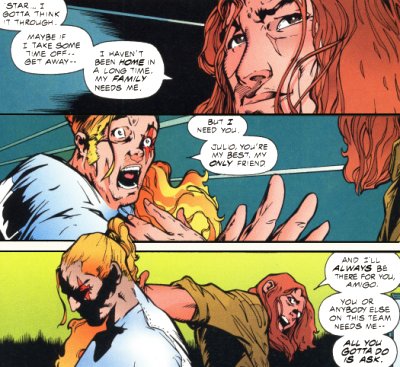 Over the next two weeks, X-Force's membership drastically changed and their headquarters was destroyed, prompting Cable to move them back into the Xavier Institute alongside the X-Men. [X-Men Prime]

Julio was not amused at how Cable chose to reorganize their lives so abruptly, and was equally opposed to Cable's announcement that they would be working more with his telepathy, getting inside their heads. All this convinced Ric it was time to take a vacation and return home to Mexico for a time. Shatterstar was distraught at the idea of his departure and felt like he was losing his one true friend and companion on Earth. [X-Force (1st series) #44] 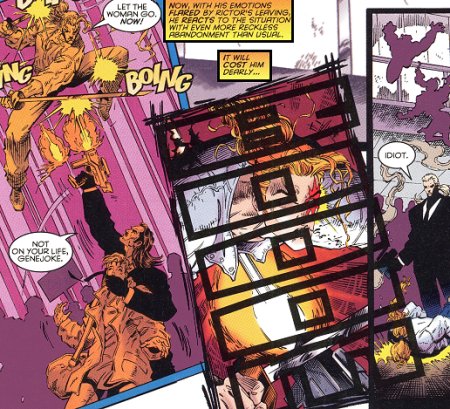 Still, he accompanied Rictor to the airport along with Cable and Domino, seeing him off to Guadalajara. No sooner was Rictor's flight off, however, that a riot broke out among anti-Genoshan protesters, who were campaigning against the immigration of Mutates due to the Legacy Virus outbreak in that country. The riot was actually a cover for two Genoshan Magistrates, Hawkshaw and Pipeline, to kidnap scientist Renee Majcomb back to the mother country. Emotionally off-balance due to Rictor's departure, Shatterstar recklessly leapt down at his opponents from the balcony and ended up being shot in the chest as he fell. [Cable (1st series) #22]

'Star was laid up in the X-Mansion's medi-lab for several days under the care of Hank McCoy, who uncovered several anomalies in Shatterstar's genetic make-up while running his tests. Shatterstar began to recognize something was amiss himself. His healing abilities were not functioning as strongly as they had in the past, and his "warrior's edge" seemed diminished as well. 'Star initially attributed this to merely being off his game after losing Rictor, but soon was confronted with a greater mystery once X-Force was temporarily held for questioning by the NYPD after a battle with the Externals. The police apparently had a criminal file on a runaway from Boston, Massachusetts named Benjamin Russell, whose face and fingerprints matched Shatterstar's exactly. [X-Force (1st series) #54] 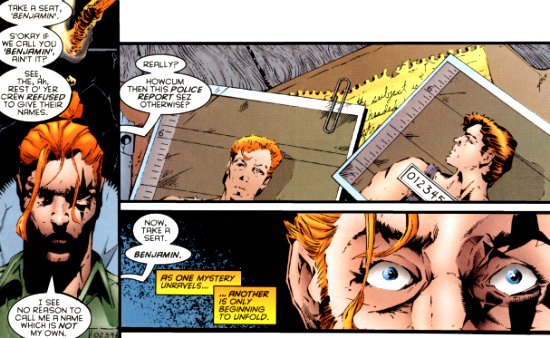 Significantly unnerved by this revelation, Shatterstar was unsettled even further after accompanying Siryn to the Weisman Institute for the Criminally Insane, where her memories had apparently been edited against her will weeks earlier. Overwhelmed with déjà vu after reaching the institute, 'Star was confronted by the puppets of Gamesmaster, the all-powerful omnipath X-Force had encountered in the past. Benjamin Russell, it seemed, had once been a patient at the Weisman Institute and Gamesmaster flooded Shatterstar's mind with Russell's memories. Gamesmaster further claimed to have created the Shatterstar identity with his powers, and that everything 'Star remembered about that life was pure fantasy. [X-Force (1st series) #56]

Although they were distracted by the threat of Onslaught, X-Force returned to the Weisman Institute as soon as they were able, in order to confirm Gamesmaster's revelations one way or the other. The institute had been completely swept clean when they got there. While en route to Boston in the PACRAT, X-Force was attacked by Mojo's servants, Gog and Magog. Shatterstar and Cable were kidnapped and digitized by Mojo, forced to live out a television program Mojo had created for them. 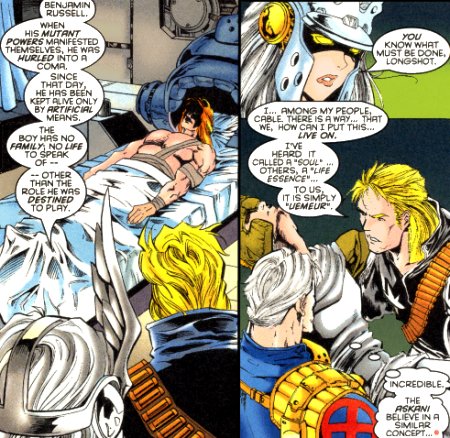 Mojo had gained access to future programming from Mojoworld and learned his world was on the verge of a Hundred Years' War, destined to end with Shatterstar killing Mojo and freeing the enslaved biped race. Mojo attempted to prevent his own death by killing Shatterstar in one of his pre-scripted broadcasts and succeeded in fatally wounding the young warrior. For her own reasons, however, Spiral turned against Mojo and helped X-Force by teleporting them to the bedside of Benjamin Russell. According to Spiral, at least, Russell had been lying in a coma for years, ever since his mutant powers first manifested themselves. At her direction, Longshot used a ritual practiced by his people to retrieve Shatterstar's uemeur, or life essence, and transfer it into the healthy but inactive body of Benjamin Russell. Shatterstar emerged hale and hearty, having integrated the memories of Russell and Shatterstar and accepted them both as the truth. However, while Mojo was defeated and 'Star was now at peace with his dual nature, the exact connection that previously existed between the two young men named Shatterstar and Benjamin Russell was not fully explained. [X-Force (1st series) #59-61]